The U.S. borders are getting tougher to cross with the current regime in power. The Canadian border patrol should be on high alert this weekend as one of the most notorious American promotions, Combat Zone Wrestling, heads north to challenge Smash Wrestling at three Ontario shows.

On Friday, July 14, the battle begins, appropriately, in a border city, Sarnia, just across from Port Huron, Michigan, followed by London, on Saturday, and an afternoon event in Toronto on Sunday. 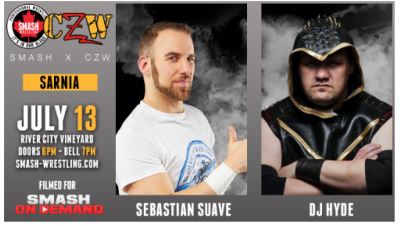 And, appropriately enough, one of the featured matches on Friday features the two men behind the promotions, with CZW owner DJ Hyde facing Sebastian Suave. Both warriors shared some details in what went into the promotion versus promotion weekend.

It’s actually a return match-up, reminded Hyde. “We worked with Smash in the past,” he said. “It just seemed like a very good idea for us to partner up. I’m very much about working with good promotions.” CZW has done similar tours with the Chicago-based Freelance and IPW in the United Kingdom. Hyde believes it’s important to take CZW out of its New Jersey-Philadelphia base. “I also believe we are in the toughest market there is. The Philadelphia northeast area has so many top promotions, and you can see talent everywhere,” said Hyde, who lives in Delaware.

Each side benefits, said Suave. “Cross promotional efforts are a multi-layered beneficial exercise where both promotions can be exposed to a new audition. With Smash Wrestling being the host promotion it’s another constant reminder to our loyal and casual audience members that we continue to bring about fresh and relevant talent for their hard earned money. As well, in our business, the opportunity to network with promoters and other talent is never a bad thing for any parties involved.”

Some inter-promotional matches to look forward to include: Brent Banks vs Myron Reed vs Tarik; Tyson Dux vs Trey Miguel; Kevin Blackwood vs DJ Hyde; Cody Deaner vs MJF; and Scotty O’Shea vs Brandon Kirk vs Mike Rollins vs Trey Miguel.

There’s a notoriety to CZW for very violent matches. Hyde sees that as their “specialty.”

“CZW does have a certain reputation, and with the quality of talent out there, it brings in something different that the fanbase in these new markets don’t get to see,” said Hyde. “It makes it an attraction, which is why it worked so well the first time we did it.”

Bring it on, said Suave.

“Our roster has been more than comfortable moving to a more violent style and thriving in it. A perfect example would be when Tyson Dux had a No-Disqualification match with Jimmy Havoc that showed him in Havoc’s element and not just tinkering lightly with hardcore,” said Suave.

The variety is there in the lineups, stressed Suave.

“For this particular tour I don’t see the need for a hardcore themed show. CZW has always prided itself in not only producing a diverse roster but also having their finger on the pulse with the stars of tomorrow,” said Suave. “This time around they are represented by the likes of Maxwell Jacob Friedman (MJF), Myron Reed and Trey Miguel who are not only the stars of tomorrow but arguably starting to make cases for being the stars of today. If you look into all the top independents across North America, these guys are collectively on all those platforms already. You can expect to see the absolute best go at it but hey, if their guys want to get a little harcore our guys will be more than ready.”

To Hyde, CZW is definitely about more than just the Death Matches.

“I don’t think CZW, even when [John] Zandig owned it, started it, it never was what people associate with what they think it is. My view on professional wrestling, and what I wanted to do when I took over the company, it was a slow a change, because if I flipped the switch, we would have lost everything very quickly. My view is, I want to have a company that has something for everyone. Very much in the landscape of wrestling, it’s very much where companies are niche, they stick to a certain style or a certain type of guy, or a certain way that they brand things. I want to have that hodge-podge of something for everybody.”