The campaign to get Gene Kiniski into the B.C. Sports Hall of Fame

While Gene Kiniski received plenty of recognition and accolades during his post-wrestling years for his legitimate sporting background in amateur wrestling and professional football, there is an accolade that some see as inexplicably absent from his résumé. While Gene Kiniski is an inductee in most of the leading pro wrestling halls of fame, his name has never been added to the roll of a “sports” hall of fame. 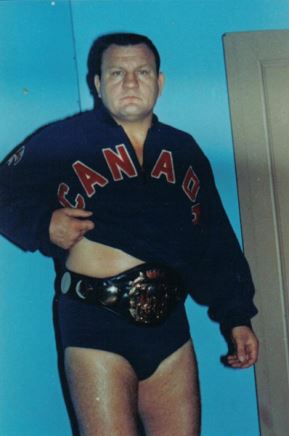 Recognizing Kiniski’s stature as a headliner in British Columbia for over two decades, his lengthy NWA World heavyweight title reign in the 1960s, his years of success in sports outside professional wrestling, his commanding presence in British Columbia throughout much of his life, and the recognition and respect he earned from fans and fellow athletes alike, some prominent names have turned their attention in recent years to getting Canada’s Greatest Athlete inducted into the British Columbia Sports Hall of Fame.

Veteran broadcaster Bernie Pascall, a BC Sports Hall of Famer in the media category, has been involved in efforts to get Kiniski inducted to the BC hall, which is located at Vancouver’s BC Place Stadium. While previous efforts to get Kiniski inducted have fallen short, Pascall says, “There’s a move afoot now to have him included in some capacity just for his involvement. So many young wrestlers from Simon Fraser [University] and from [the University of British Columbia] were friends of [Gene’s sons] Nick and Kelly Kiniski, and they came down to Gene’s home and Gene would spend so much time with people like [Olympic silver medalist] Bob Molle.”

Pascall cites “Gene’s commitment to the betterment of young wrestlers that were combining their academics with wrestling” as one reason he is worthy of consideration for a place in the BC hall. “He was very respected and high-profile,” says Pascall. Referring to leading sports figures of Kiniski’s day in or from Canada such as Jackie Parker, Eagle Keys, and Gordie Howe, Pascall says, “I think if you included Gene’s name in that group, people knew who he was. They may not admit that they were wrestling fans, but they certainly knew the name of Gene Kiniski.”

Another British Columbia Sports Hall of Famer in the media category, Greg Douglas, worked in public relations for the Western Hockey League’s Vancouver Canucks in the late 1960s before serving as PR Director and Assistant General Manager of the NHL expansion team of the same name in the early 1970s. Regarding the Western Hockey League team, Douglas recalls that the 1968–1969 Canucks had a strong season but were expected to hit a brick wall when facing the league-leading Portland Buckeroos in the WHL final.

Douglas says, “They were heavily favored to sweep Vancouver … I talked to Gene and … asked him if he would come down to our dressing room. I thought, ‘Bring Gene Kiniski into a dressing room and heads are going to turn, right?’ He was more than willing and went into that room and captivated it, just as I was hoping he would. He wasn’t acting … he was telling them how important it [was] to believe in themselves … The players just sat there in stone silence, looking at him, and they all knew who he was. These guys were from all over North America.”

Douglas continues, “The story is that we swept Portland in four games and won the championship — and that team is in the British Columbia Sports Hall of Fame.” 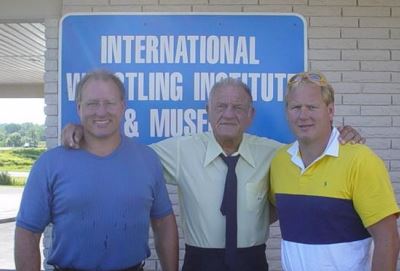 Kiniski was a regular and popular guest on a KVOS-TV sports talk show cohosted for the Vancouver market by Douglas and long-time Vancouver Sun sports columnist and fellow BC Sports Hall of Famer Jim Taylor; and, like Pascall, Douglas is one of several notable figures to have written letters or emails on Kiniski’s behalf in an effort to get him inducted to the hall. Another is Bret Hart, one of the most famous wrestlers Canada has ever produced. In his 2007 email supporting the induction of Kiniski to the BC Sports Hall of Fame, Hart calls Kiniski “one of the greatest NWA champions I ever watched” and concludes, “I can’t think of any Canadian wrestler more deserving than he is at being inducted into the BC Sports Hall of Fame.”

Jason Beck, Curator and Facility Director of the BC Sports Hall of Fame since 2006, reports that Gene Kiniski has been nominated for induction three times. Each nomination to the BC hall remains active for three years, followed by a year of inactivity before the nomination can be reintroduced.

The selection committee, which changes from year to year, comprises 15 members: five representing the British Columbia sports media; five from of the sporting community; and five BC Sports Hall of Fame trustees or inductees. Seventy-five percent support from the committee — translating to thumbs up from 12 of the 15 members — is required for induction.

“It’s a pretty high hurdle,” says Beck, “so even if you have two or three individuals that are on the fence or against it, it’s pretty tough for any nomination to get in.”

But Beck says Kiniski “always gets strong support … He’s one of those nominations that always gets votes, and I do know in some years he’s been a finalist, which means he’s made it to the top 10” of the 50 or 60 nominations to the hall during an average year.

“He definitely is someone I think we should consider fully,” Beck says. “At one time he was very likely one of the most well-known British Columbians in any field, and I think that does count for something.”

While never a member of the BC Hall, Kiniski definitely wasn’t out of place when he attended a British Columbia Sports Hall of Fame dinner and sat beside Vancouver businessman and long-time friend Moray Keith, who was a director of the organization and, according to Douglas, “led the charge” to get Kiniski inducted. Keith recalls that Kiniski was introduced to those on hand for the dinner as a Canadian sports representative around the world and “Canada’s Greatest Athlete.” 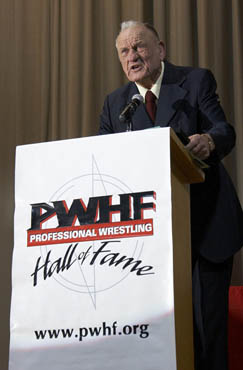 Gene Kiniski at his induction into the Pro Wrestling Hall of Fame in 2008. Photo by Andrea Kellaway, www.andreakellaway.com

“The crowd goes wild,” Keith recalls, and Kiniski got a standing ovation.

Kiniski’s undeniable presence, quick wit, smooth tongue, and ease in front of a camera led to his making occasional television and film appearances during retirement. He was a proven commodity on television, of course, dating back to the mid-1950s when he made his TV wrestling debut in Southern California. From there he made numerous television appearances on wrestling shows across Canada, the United States, and Japan. Most prominently, he was a featured performer for years on broadcasts airing across Canada that featured some of his early matches from Toronto and, later, his performances from Vancouver that aired throughout much of Canada over a period exceeding 15 years.

Kiniski’s name recognition, unique features, and crowd-pleasing aura made him a popular guest on mainstream media aimed at an audience far broader than those who bought wrestling tickets. And from time to time, Canada’s Greatest Athlete was called on to speak his mind on the air about sports other than wrestling.

Douglas recalls how Kiniski liked to talk football when he made appearances on Douglas and Taylor’s Sunday night KVOS show. Kiniski also did some cohosting of the British Columbia Winter Games on BCTV, mingling with young athletes, as he liked to do, and showing television viewers yet another twist in a character they thought they had figured out years earlier.

Along with his radio debates with Muhammad Ali and appearances on mainstream local and regional TV, Kiniski, over many years, appeared occasionally on television programs broadcast across Canada, including Front Page Challenge, Tabloid, the Sports Hot Seat, The Alan Hamel Show, and Peter Gzowski’s 90 Minutes Live.

Gene Kiniski has been nominated to the BC Hall of Fame three times, with his most recent year of consideration being 2017. He had to “sit out” this year but is eligible for consideration once again beginning in 2019. A movement is underway to make the strongest case possible for induction, and it is possible that this time around — unlike previously, when Kiniski was nominated solely on the basis of his athletic accomplishments — nomination will be for the BC Sports Hall of Fame’s W.A.C. Bennett Award, which takes into account a nominee’s inspirational and far-reaching contributions, along with unique qualifications that may not work to a nominee’s advantage when it comes to getting inducted solely as an athlete. Some key members of the British Columbia sporting community support the Kiniski nomination, and anyone with a connection to BC sports or any British Columbian who supports the nomination of Gene Kiniski for a place in the British Columbia Sports Hall of Fame and wishes to write a letter on Kiniski’s behalf before the nomination package is submitted prior to the Sept. 1, 2018, nomination deadline is encouraged to send an email indicating interest to [email protected].