Mat Matters: Reunited, and it feels so good

I’ve lost track of how many reunion of old wrestlers that I have been to, between the Cauliflower Alley Club, the Tragos/Thesz Hall of Fame in Iowa, and the Pro Wrestling Hall of Fame when it was in New York State, plus various fan fests. But I can take direct responsibility for creating a number of reunions — including one on Sunday.

It started in March 2003, with the launch of my first book, The Pro Wrestling Hall of Fame: The Canadians, which was held at Big Anthony’s restaurant in Niagara Falls, Ontario, which was Tony Parisi’s place, run by his widow and daughter. What a great time, and looking back on the photos now, it’s crushing to see how many people aren’t with us any longer. 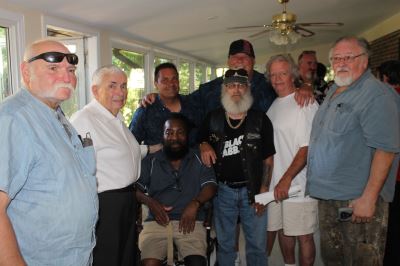 Some of the gang pose for a photo at Bernie Livingston’s. Photos by Greg Oliver

Six different Titans in Toronto dinners followed, where I teamed with Jian and Page Magen, and Andy Stefanides, to have five ticketed banquets, and one breakfast tied in with WrestleReunion.

Those were all great too. But you know what else the dinners were?

So Sunday’s gathering at the home of Bernie “The Cat” Livingston, 84 years young, was designed to be the complete opposite, and it was. There was no drama, no one stiffing me on the cost of a ticket, getting stupid-drunk, or no-showing. No one fought or stormed out, or complained about the price of a ticket or the food.

It was just good times, with plenty of laughs, good ribbing, good food, a good memories. 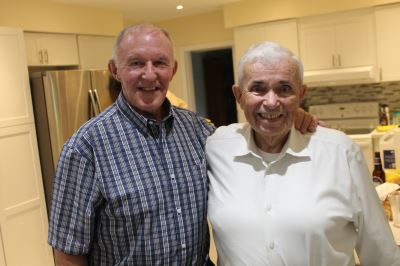 Bernie suggested hosting a reunion a while back, and really all I had to do this time around is figure out a date, and invite people. Even on that front, in Bernie’s words, “I’m retired. I’ve got time,” so he made a ton of the phone calls. (Believe it or not, not everyone is on Facebook or deals with email all the time.) He was a great host too, with plenty of food and drinks … but we learned too, like to have beer cups next time! Kudos to his son, Bill, for a lot of the work too, and I’m guessing the rest of his family helped as well, even if they were avoiding the rowdy bunch. 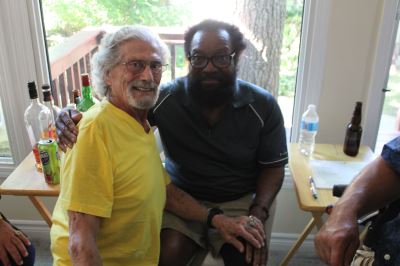 A few of the names would be familiar to wrestling fans. “No Class” Bobby Bass, as much as it might pain me to say it, was probably the biggest star there (and certainly had the biggest mouth). But wrestling’s a family, and whether you were an expert on making others look good — I’ve learned not to call them jobbers — like Dino Nero / Peppi DiPasquale or Big Mac — or worked the Ontario circuit, like King Kong Brule or Ron Doner. Family of wrestlers came out too. 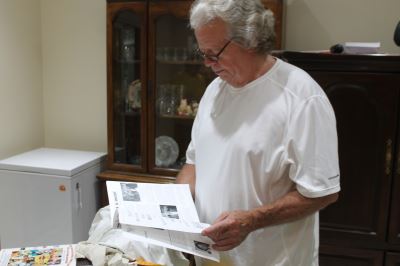 And not everyone had a lot to say. “Silent” Brian Mackney, who got beat up a lot on those WWF tapings out of Brantford, is deaf, so had his pad of paper out to share stories, and is very demonstrative with “the boys” as they laughed about past matches and miscues. Brian’s two bony elbows are proof enough of the bumps he took for our enjoyment. 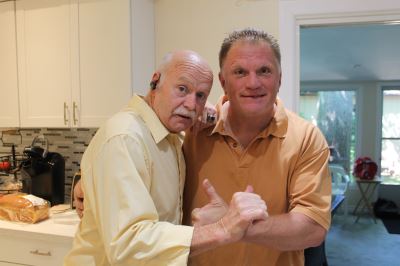 What a pair, Bobby Bass and Chuck Simms.

“Pretty Boy” Chuck Simms (who I first interviewed when I was a teenager publishing The Canadian Wrestling Report) runs a catering business that specializes in bringing the pig roast to you, and while he didn’t do that on Sunday, he did look after building the homemade hamburgers and cooking them, along with the sausages, onions and peppers, ably assisted by his sous-chef Bobby Bass. 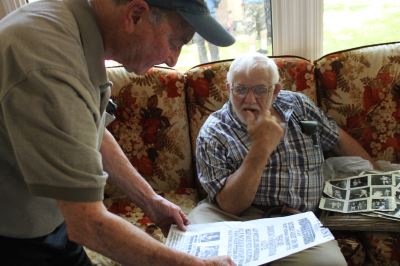 Roger Baker and Terry Dart pour over the vintage clippings and posters.

Wrestling memories exist in our mind, but also on paper and in photographers. On that end, the legendary Terry Dart from London came down, thanks to Ray Osborne for picking him up. What’s cool is that Ray, then 17-years-old, used to travel with Terry to shows in the past, like in Detroit, so it’s a reunion for them as well, a friendship rekindled in person rather than in the impersonal online world. Roger Baker, photographer and writer for the magazines, was there too, armed with plenty of stories. Wes Maidment, who used to put out a newsletter with Ontario-related clippings, and now is the principle “Bearman” Dave McKigney archivist on Facebook, was out as well, sporting a super Pampero Firpo t-shirt. Terry, Ray and I all brought some photo albums full of photos and clippings to share.

Finally, I made sure to include some of the current wrestlers on Ontario’s indy scene. At this point, Rip Impact is a seasoned veteran, and since he was trained by Hamilton’s Ernie “The Executioner” Moore (who didn’t make it) he knows the oldtimers anyway, so it was great to see him and his wife, Dianna. Kudos to the CWO promotion for most of its behind-the-scenes team coming out.

There was talk of making it a yearly thing, which is fine with me. I’ve done my time putting on the Titans in Toronto dinners, and, having enjoyed myself so much on Sunday, I’m not sure anyone can ever convince me to do anything else like that again.