Ken Jugan’s love of professional wrestling began when he saw live events in McKeesport, Pennsylvania, which is only a few miles away from his home in Glassport. He soon found a way to sneak into Studio Wrestling events to take pictures. He then started to provide editorial for the programs sold at Pittsburgh’s Civic Arena during the early and mid-1970s.

That’s where his passion for the industry began, and when he decided he wanted to try his hand in the ring. He started to travel around the region and into West Virginia. In November, 1975 during a card in West Virginia, a wrestler failed to show. The promoter looked at the just-turned-18 Jugan and told him to put on his rookie gear. 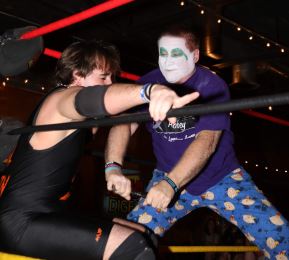 The next year, Jugan began to tailor the “Zoltan” gimmick. By the late 1970s, he was considered to be one of the first to use face paint. From “Zoltan the Great” to “Lord Zoltan,” Jugan was starting to be booked frequently. Then he started to promote his own shows.

In the early-to-mid 1980s he traveled a lot and was booked often for the World Wrestling Federation television tapings in Allentown, PA. It was there that he played an understated role in a major WWF feud. Jugan was to take on The Iron Sheik in one-on-one competition and Sgt. Slaughter, who up until that point had been an unsympathetic figure, suddenly came out to verbally assail the Sheik. The former WWF Champion quickly dispatched of Jugan and the feud between the Iron Sheik and Sgt. Slaughter was on. It was also during this time that Jugan and a partner took on Andre the Giant in a handicap match. The partner took the pin and Jugan has always joked that he was never covered by Andre.

When Jugan realized that he wasn’t going to succeed in the WWF like his foes, including Tito Santana, “Mr. Wonderful” Paul Orndorff and the Samoans, he decided to return home get a day job and helm a family. Even so, “Lord Zoltan” would make regular weekend and vacation day appearances.

And more importantly, when sons Adam and Blaise were both born deaf, Jugan began a long and storied life of helping others. Most familiar is the “Deaf Wrestle Fest” events that showcased wrestlers and personalities from throughout Jugan’s rolodex. From The Iron Sheik to Mick Foley, “Big Bully” Nick Busick, Dominic DeNucci and Bruno Sammartino, Jugan’s annual shows helped raised thousands of dollars for the Western Pennsylvania School For The Deaf in suburban Pittsburgh.

More than a decade ago, Jugan was diagnosed and treated for Prostate Cancer. Since that time, he has personally raised money for various cancer-related charities. In addition, during the spring and summer months, Jugan, as well as friends and his sons have participated in dozens of charity walks.

There’s never been a time in which Ken Jugan has not gone out of his way to help a friend, and especially those in need.

In 2012, Jugan emceed the Professional Wrestling Hall of Fame and Museum induction ceremony in Amsterdam, New York. That class included DeNucci and featured Sammartino picking up his Hall of Fame ring.

Now in his 43rd year as a wrestler, Jugan has been diagnosed with Colorectal Cancer. The long time champion has undergone a series of treatments that have already left him uncharacteristically tired and tested. Now the Professional Wrestling Community in Pittsburgh is coming to help their friend.

“A Benefit for Ken Jugan/Lord Zoltan” is scheduled for Sunday, August 5, 2018, at the Shriner’s Pavilion in Cheswick. A professional wrestling card will take place, a Chinese Auction is being assembled and a 50/50 raffle will also be collected. 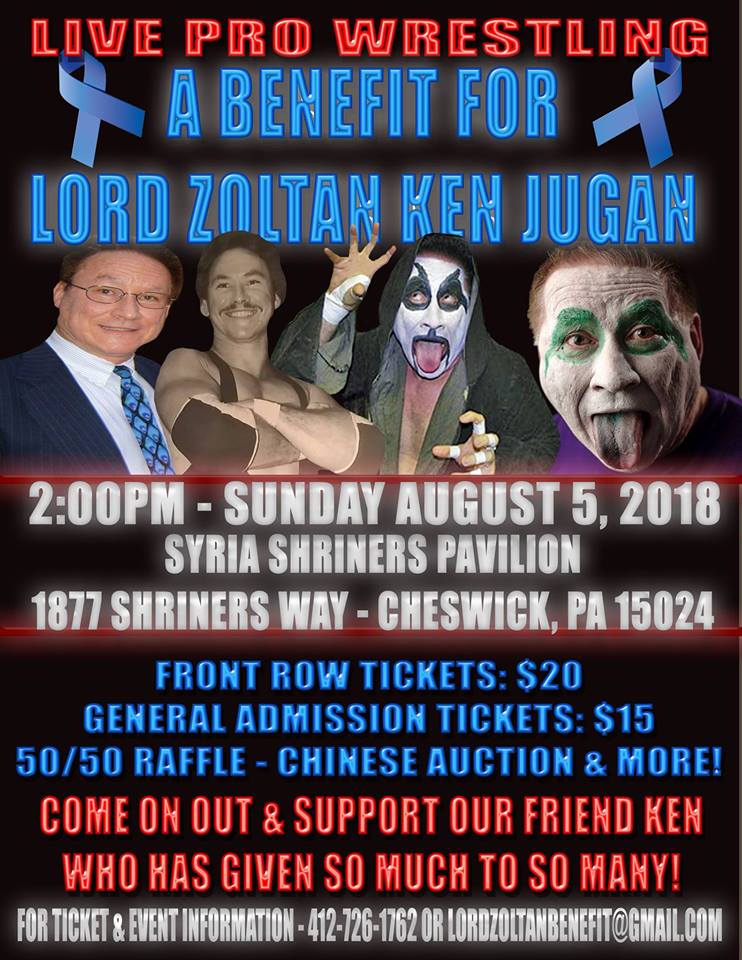 Wrestlers and personalities from throughout Pittsburgh and beyond is being contacted and no one is saying no to the effort. Friends and foes such as Norm Connors, Cody Michaels, Bubba the Bulldog, “Nasty” Nick Crane, Shirley Doe, “Beastman” Fetty, and Dennis Gregory have been confirmed. Other wrestlers such as Anthony Alexander, Shawn Blanchard, Lou Martin, King Kaluha, Lou Marconi and Frank Stiletto are also scheduled to appear. Lord Zoltan’s famous manager (and sometimes foe) Mayor Mystery as well as TC Reynolds are to appear. Preston Steele, T-Rantula, Sniper and Justin Sane will also be in attendance.

Referees Bobby Williams, Shawn Patrick and Jimmy James will be on hand to call matches down the middle. And the event will be co-hosted by friends and ring announcers Adam Montgomery and Trapper Tom.

More announcements are to be made as more wrestlers are going to want to be apart of this showcase of support and brotherly spirit.