‘350 Days’ takes a look at life outside the ring

What happens when the cheering ends? When the men and women of the squared circle are recovering from the bumps and bruises in the wrestling ring? A new documentary gives viewers direct access to lives of these wrestlers on the road from the 1980s, which was much harder than even die-hard fans could imagine.

350 Days gives viewers direct access to life of these wrestlers on the road in the ’80s, which was much harder than even die-hard fans could imagine.

“After the glory was not so glorious for some of them,” said Evan Ginzburg, associate producer of the documentary. He said the film contains exclusive stories about their personal lives; marriage, kids, drugs, mind, body and soul, and most importantly, things they regret. “We interviewed 72 legends and edited it down to 38. We had 80 hours of footage [in total].”

The topics may seem shocking, but he doesn’t want the viewers to get the wrong idea. “It is not intended to shine a negative light on their lives. They are pouring their hearts out,” said Ginzburg.

Although 350 Days features wrestlers from the Hulkamania era, the film isn’t about wrestling at all, according to executive producer Fulvio Cecere. “I didn’t really want it to be a film about wrestling. I wanted to make it a real human-interest story to really show what these guys were like,” said Cecere. He remembered the first interview he filmed with Tito Santana and how the story unfolded in front of his eyes. “I did my research and realized he lives in New Jersey, [and that] his wife owns a hair salon and I thought, ‘This is perfect place to do it, let’s interview him at the salon.'” 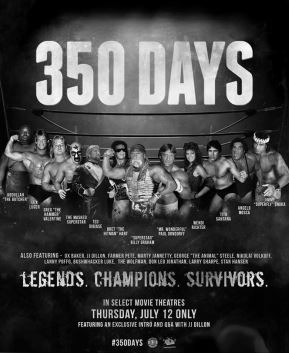 Cecere’s said his idea was to show that Santana was just an average guy. “There were women getting their hair done in the background and it just looked so real and Tito was so candid,” he said. After that weekend, Cecere thought that they had really had a good story. All together they did 21 days of shooting. The rest is history.

Surprisingly, the most challenging phase of creating 350 Days was not the travelling, which they did quite a lot of. It was the editing process that proved to be a difficult task. Luckily, they were in good hands when it came to putting together the final pieces of this film. “Our editor, Michael Burlingame, doesn’t know the name of the game and doesn’t care about the ‘oh this one [wrestler] was my childhood favorite.’ There were no biases and he picked out the most poignant, powerful and moving content,” said Ginzburg. Cecere agreed but felt that getting the wrestlers to sit down for an interview also proved to be a challenge.

“We just missed Roddy Piper. We contacted him to set a date. It looked like it was going to happen and then he passed away. That really hurts,” said Cecere, who also revealed that 12 of the 72 legends they interviewed have already died, including George “The Animal” Steele, Jimmy “Superfly” Snuka, Ox Baker and 99-year-old Angelo Savoldi.

Cecere wasn’t a huge wrestling fan himself but admits that he was moved by the stories that we were being told. “[Masked Superstar/Demolition Ax] Bill Eadie, this big, giant man [was] getting all teary when he talked about missing his daughter’s birthday. Listening to that, you can’t not get emotional,” he continued, “I’m getting emotional thinking about it.”

He adds that wrestling fans everywhere will appreciate the lives the legends lived. “I just watched the film again yesterday and tears of joy really. I think the fans are really going to love it.”

350 Days will premiere in July in the United States only. Cecere said Canadian fans shouldn’t be discouraged that the film won’t be available in Canada right away. “Personally, I do want to show it in Vancouver and Toronto for sure because I currently live in both cities. I grew up in Montreal so I definitely want to show it there. it’s important to me that I get it out in Canada.”

In the end, Ginzburg and Cecere said these legends came to the same realization: “Even after all that, how difficult it was, their health concerns, having no money, every single one of them would do it all over again,” said Cecere.

Check out 350 Days in select theatres across the United States on July 12th with a special exclusive intro clip and a Q&A with JJ Dillon and the associate producer Evan Ginzburg. Buy your tickets at this link.