‘350 Days’ could have used a tighter focus

In a recent Tweet, Chris Jericho said that 350 Days is “the most revealing documentary on pro wrestling ever.” I won’t disagree with that tweet-worthy phrase, but I will add that just because it reveals a lot, that doesn’t mean it’s a perfectly-constructed film.

When the film first came out, in June 2018, it got limited theatrical release, and we had former Detroit-area manager “Supermouth” Dave Drason (Dave Burzynski was manager) review it at SLAM! Wrestling (350 Days a top-notch, moving documentary). 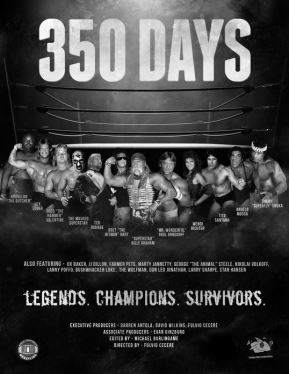 So I went into it with high expectations and came away frustrated.

Because 350 Days tries to fit in so many aspects of life on the road for pro wrestlers back in the day — really the 1970s and 1980s — it jumps from subject to subject. There were many times I thought to myself, “That’s really interesting, I hope there’s more on it…” and then it was on to another interview, another issue to discuss.

We jump from gimmicks to injuries to drugs and steroids to blood to ring rats and strains on marriages and families, without ever settling down enough for the average person to go more than, “Huh.”

A simple example illustrates the point. Pro Wrestling Hall of Fame inductee Wendi Richter is shown on a horse farm, walking horses, riding horses. At no point are we told whether it is her farm or just somewhere they put her for the shoot. Then, later on, she says that she couldn’t have kids because of the schedule she went through. Boom — should have been a talking point, a follow-up, “are the horses a substitute?” Instead, we’re off on another tangent.

Given my years covering pro wrestling, I acknowledge I’m not the target audience exactly. But a little bit of research could have resulted in some gems. Bret Hart goes, “I consider myself an artist,” referring to his work in the ring; yet he also has dabbled in more traditional artwork, drawing in particular. Boom — again, another good visual that could have been done and given more depth to the subject.

Along the same line, there’s little context given to names or why they matter. Gorgeous George was the biggest wrestling star in the world for a time for a reason — he was the right man at the right time as televisions moved into people’s homes, and his act was simple to understand in black and white. That’s context, and that’s missing again and again in 350 Days.

What I did take great joy in, though, was seeing so many people that I knew, and, more poignantly, people no longer with us. (I teared up seeing my old pal, Willie “Wolfman” Farkus, for one.) We get to cook with the late, loud Ox Baker in his kitchen, which is sure entertaining … but it’s also a distraction, and again, not necessarily followed up upon. Tell us about your meals on the road, Ox. It’s great that you like to cook now, but everyone’s got to eat. Not everyone can cause a riot like you could.

Tito Santana, always well-spoken, is filmed in a hair salon. I will assume it was the one that he owns and operates with his long-time wife, but she isn’t interviewed on camera. Santana stayed in one spot, New Jersey, rather than move around, and later worked part-time as a Spanish and gym teacher. Again, interesting and it could have been explored.

What I’m really saying is that 350 Days would probably have been better served as a dozen 30-minute episodes of a series rather than cramming it all into one movie lasting 1 hour 48 minutes that lacks any real cohesiveness, other than the fact that all these people interviewed worked in pro wrestling in some capacity at some point in time.

But the great thing about movies like this being accessible digitally — it comes out on April 2, just in case you don’t have enough wrestling on your mind with WrestleMania days away — is that you can stream 350 Days and instantly decide for yourself what you think of it.