Looking back at the ‘Great’ career of Ontario’s Alec Girard

When Vince McMahon Jr. began expanding his WWF promotion, and turning it into an international phenomenon, many smaller promotions suffered as a result. After all, McMahon’s strategy was to lure each promotion’s top stars away with big money contracts while leaving the lesser stars to deal with the fallout.

But these changes didn’t have much impact on Alec Girard, also known as Alexander the Great. 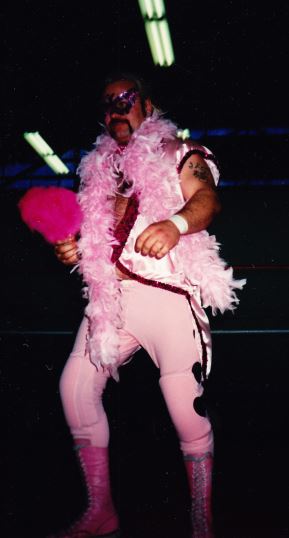 Alexander the Great struts in 1990 during a show in Hamilton, Ontario. Photo by Greg Oliver

Even with the WWF’s explosion in the 1980s, Girard — whose name was also spelled Alex Gerrard and other variations — kept wrestling as if nothing happened. By the time he actually retired from in-ring competition only a few years ago, Girard ended up wrestling on-again-off-again on the Canadian independent wrestling circuit for about 40 years. (There was another Alexander the Great, Alexander Garkovienko, who hailed from Europe and was brought to North America by promoter Jack Pfefer.)

Like many of today’s biggest wrestling superstars, Girard decided to become a wrestler to pursue a boyhood dream. He was a small kid in school, and wanted to follow in the footsteps of his favourite wrestlers growing up: Killer Kowalski, Don Leo Jonathan and Mad Dog Vachon. And like those greats, Girard had to know how to grapple and actually “wrestle,” which is something he thinks is missing from today’s version of the sport.

“Wrestlers back then had to really wrestle,” Girard told SLAM! Wrestling. “Back then it was more earning your spot through your own hard work, whereas today, everything’s rehearsed and too story-driven.”

Girard was trained by legends Billy Red Lyons and Dewey Robertson, schooled in all aspects of the mat game, able to do whatever was needed when inside the wrestling ring. He wasn’t shoe-horned into being a high-flyer, a power-based wrestler, or a mat technician.

That versatility translated into a lengthy and successful career for Girard that allowed him to travel extensively. Although he wrestled mostly out of Ontario cities like Hamilton, Brampton and Fergus, he also got to wrestle in towns all across the province and into the United States. Back during the pre-WrestleMania territorial years, it was very important for a wrestler to venture into other regions to expand their horizons and enter new markets in the hopes of making it big.

This was true for Girard, as he managed to find steady work in independent wrestling promotions in Ohio, upstate New York, and especially in Quebec for International Wrestling. It also led him to get booked big (and unpredictable) names such as Buzz Sawyer and The Sheik.

Wrestling was his dream, but it wasn’t his day job. As his era was coming to an end, many of the local wrestlers didn’t have much of a chance because the biggest names in those smaller promotions were bought out by the companies with the deepest pockets. Girard worked a regular job in a steel plant, keeping his wrestling dream mostly to weekends and holidays.

Girard spent most of his career — which took place during the ‘Territory Days’ when the National Wrestling Alliance (NWA) was at its strongest — wrestling under his own name. It wasn’t until he met promoter Larry Kasaboski, who ran northern Ontario in the summer, that he was bestowed with the name “Alexander the Great.” Not only was that an important tour for Girard for his career, but it was also one of his favourites in general. Girard loved to travel and see different parts of Canada, and had a particular fondness for cities like Sault Ste. Marie and North Bay.

Big Mac (Meryn McKie), a veteran of the Canadian wrestling circuit, has fond memories of working with Alexander the Great while both men worked for Kasaboski. “It was Alex who taught me how to throw ‘worked’ punches. We’d be in the dressing room before a match and he’d show me how to throw a worked punch so that I wouldn’t end up potatoing the other guy,” said Big Mac. (In wrestling, “potato” is a term used to describe when a wrestler punches another for real, instead of the “worked” way.)

As a veteran and all-round wrestler, Alexander the Great was able to pass down his knowledge and experience to newcomers to his circuit, Big Mac included. This led to some of Mac’s favorite matches and some of his fondest memories were from his Northern Ontario tours with wrestlers like Girard. “We had lots of fun,” Mac reminisced.

It was through his work for International Wrestling that Girard achieved some of his biggest successes. Working for that promotion opened the door to much bigger promotions, including the NWA, AWA, and of course, WWF. It was a time of big stars crushing local talent, and Girard got in there against some of the best, making them look good in the process: “Rowdy” Roddy Piper, Greg “The Hammer” Valentine, Iron Sheik (whom he wrestled eight times), Tito Santana, Ivan Putski, and Jimmy “Superfly” Snuka.

All in all, Girard’s wrestling career spanned four decades, though it wasn’t without its fair share of lengthy breaks. Describing his career as “on and off,” Girard had periods where he’d wrestle for four years and then take a full year off, usually to recover both physically and financially. It was the injuries in particular that took their toll and caused him to step away from in-ring competition. “It’s a tough gig. Those aches and pains, those injuries, they never really go away. That’s something you’ve got to be ready for if you want to be a wrestler. If you’re not prepared for that, you should go somewhere else.”

Although he doesn’t watch wrestling on television much these days, he’s still actively involved in the wrestling scene in his native Hamilton and around the greater Toronto area. He’ll appear as a manager or act as on-screen authority figure for promotions like GWN. It goes to show that even if time and injuries take their toll on one’s body, as long as you have a dream, you can still keep something you love close to your heart.