Get the hairspray and glitter ready for GLOW’s second season

The binge-worthy Netflix original series, GLOW, has been popular with wrestling fans. If you haven’t watched it already, you’re definitely missing out. For those of us who have watched season one, we are taking out our glittery spandex and getting ready for GLOW‘s second season, premiering on Friday, June 29th.

The 1980s-inspired series follows a group of women who are cast to be on a women’s wrestling show called GLOW, loosely based on the original Gorgeous Ladies of Wrestling. Drama, laughter and power bombs are guaranteed on every episode.

For those who are avid wrestling fans, taking part in a series like GLOW would be a dream come true. For Britney Young, who plays the role of Carmen “Machu Picchu” Wade, this was a whole new experience.

“I was not a fan at all growing up. I actually thought it was fake,” she admitted over the phone to SLAM! Wrestling. However, she has since changed her tune and now has a newfound appreciation for wrestling. Most, if not all the cast, had never wrestled before becoming a part of GLOW (the notable exception being Kia Stevens, a.k.a. Amazing Kong). Young said that surprisingly, the wrestling training was not the most challenging aspect of preparing for the series. 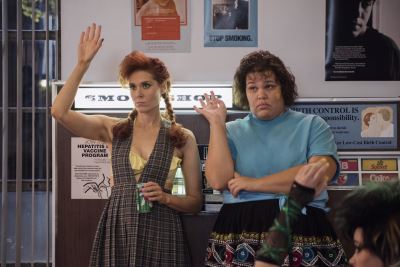 “Balancing our [filming] schedules with the wrestling training was very difficult in the beginning because you need to find time to rest in between everything,” said Young. The actress recounted that their days started with filming in the morning followed by in-ring training in the afternoon. Young wrestles a lot in season two, more than she has in the past, which means finding time to rest and recover. The girls had the opportunity to work with current Lucha Underground wrestler, Chavo Guerrero. Young said they learned a lot from him. “[Training with him] was the most fun part, so it was kind of a Catch-22,” she said with a laugh.

Although she can’t reveal any surprises, Young said that she feels the viewers will really be able to relate to each episode. “We have some really great story lines coming up and people will [appreciate] that we really tell all sides of the story,” said Young.

She also described one experience that really resonated with her. “We have one episode that was just a blast to shoot,” she continued, “it’s unlike any other episode I’ve ever seen on television and when people get to it they’re going to know exactly what I’m talking about.”

Young reveals that season two is all about taking every aspect of the show to the next level. “Everything from the storylines to the characters were elevated. I’m very proud of what we have created,” she concluded.

Young said her character evolves and finally finds her confidence in the ring. “Carmen comes from a wrestling family and in season two she finds her place, becomes her own women and her own wrestler,” she said. Although Carmen Wade is featured prominently, season two will highlight the relationships between each of the ladies. Young said each girl has their moment to shine, or to GLOW, shall we say. However, she confessed that none of this would have been possible without those behind from the scenes. 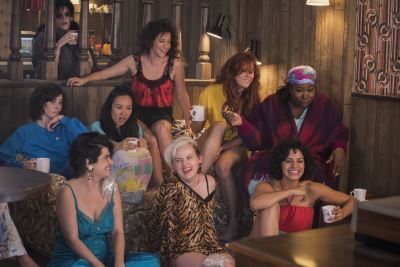 “It’s just amazing to see what production comes up with and how they really upped their game with things like hair and make-up,” she said gratefully. Overall, what she enjoyed most was being in the squared circle. “As tired as I was, I just loved wrestling.” However, Young admitted the fatigue was always worth it in the end.

Young also expressed her appreciation for this opportunity. “Being a plus-size actress and having an athletic role is something I do not take for granted,” she acknowledged.

She said that the writers and directors really believed in her and put her in situations where they knew she would thrive. “They would say things like, ‘She can do this, she can get physical, so let’s put her in the mud and see what she can do,'” she said with a laugh. “I felt really honoured to do things like that this year and I didn’t get to do past years.”

Young revealed what she loves most about GLOW is the theme of women coming together. “It’s about personal life lessons, but also really about confidence and empowerment.” She added that you can expect all of the funny and quirky personalities this season, but this time with the heat turned up. “The stories in season one were great, but the stories in season two are just fantastic,” Young said.