The Women of Honor Champion Sumie Sakai will captain her eight-woman team at Friday’s Ring of Honor Best in the World PPV. The champion said that she is nervous for this upcoming match, but is also filled with excitement.

It’s the best female athletes from both Ring of Honor and Stardom facing off in Baltimore: Sakai, Jenny Rose, Mayu Iwatani and Tenille Dashwood against Kelly Klein, Kagetsu, Hana Kimura, and Hazuki.

“Mayu is one of my favorite people to wrestle against. I had matches against her in Japan so the fact that I get to be in a tag team with her just adds to the [anticipation],” Sakai told SLAM! Wrestling.

However, she revealed that although they will be her teammates on Friday, she knows they all have an eye of her hardware. “I know that one day [they] will be coming for my belt, even though we are friendly,” said Sakai with a laugh.

As much as she loves having the title, Sakai admitted that her first thought wasn’t joy or bliss when she won the belt at Supercard of Honor XII on April 7, 2018, at the UNO Lakefront Arena in New Orleans. “I was so happy I won but I was immediately concerned for Kelly [Klein],” she continued, “I wanted to make sure she was okay and that she wasn’t really hurt.” 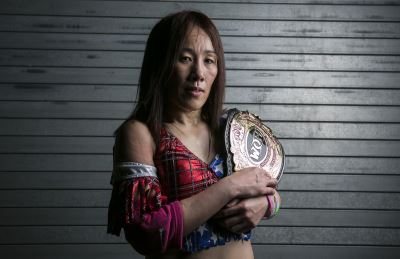 Sakai explained that her humble attitude towards this win stemmed from that fact that she was not a wrestling fan growing up. “I thought, ‘Is this really happening to me?’ I never thought in a million years that I was going to be a wrestler, so this was the moment when everything hit me.”

She started her professional wrestling career at age 25, making the switch from judo. At the time, she didn’t think that women could wrestle at a professional level. “It was one of my friends who convinced me to try out for the local wrestling company in Japan,” she said. Once she worked up the courage to audition, she eventually made her pro debut with Yoshimoto Ladies Pro Wrestling promotion on April 20, 1997.

Sakai expressed that she has learned a lot about the wrestling world, and now has her own opinions about the women’s revolution.

“I think that the women’s revolution is starting in Ring of Honor, not [necessarily] in the WWE.” Sakai said that she had watched WWE superstars like Natalya and Mickie James for a long time and that they are very talented wrestlers, but the women of ROH have just a slightly different image that works in their favor.

“The ROH women aren’t just portrayed as sexy, as they are sometimes in the WWE. ROH focuses more on talent and [what women can do in the ring].” 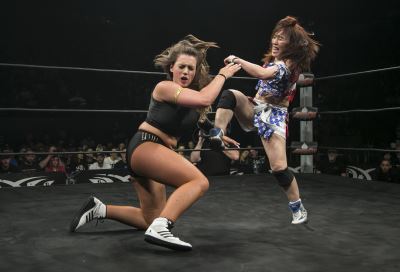 She believes that Friday’s eight-woman tag team match in particular will showcase women’s wrestling differently from what is normally seen in WWE. “There are five Japanese women, two American and two Australian women, making it an international match. You don’t always see that.”

The Women of Honor Champion revealed that there is not any set strategy for this match. She said that she is familiar with her teammates’ wrestling styles and will adapt when they get into the squared circle. “I find it exciting that we don’t have a plan. I don’t know how this match will play out or what will happen in the end, but I’m [curious] to find out.” She added that she is eager to know what the fans will think as they watch these two teams face off.

One thing they can certainly expect, however, is her signature move, the Missile Drop. “I am hoping to use it on more than one of my opponents, but I have other moves I plan on using too.”

That’s not the only thing she wants her challengers to know. Sakai said she is the champion for a reason and she plans on showing them how she got there. “I just want to be at my best and I’m going to give this match 125 percent.”

Catch the first-ever Ring of Honor eight-woman tag team match this Friday, June 29. Head over to rohwrestling.com to order the pay-per-view.