ROYAL OAK, Mich. — Ring of Honor returned to Michigan for War of the Worlds 2018, but this time, it was held at Royal Oak Music Theatre. This venue held around 1,000 people compared to the Performing Arts Center in Dearborn, which ROH went to for years, and only held around 500. The city of Royal Oak is very nice, as well. You can find everything wihtin walking distance, such as restaurants and clothing shops. On the way to the venue, I even spotted ROH star Kenny King strolling through the city. 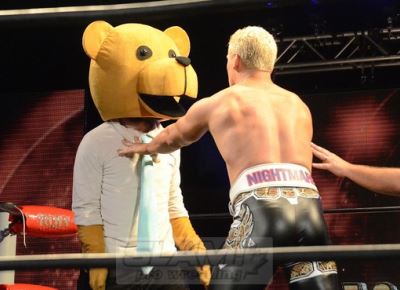 Cody and Bernard the Business Bear. Photos by Brad McFarlin

This venue has a much more aesthetically pleasing look than the previous one. The venue had architectural designs all around, and also had theatre seating, which meant that every seat was a good seat. I was lucky enough to be granted suite seats at the top of the theatre, due to my dad being the photographer of the night.

Though I didn’t know it at first, it turns out I was sitting with Brandi Rhodes’ family! I figured it out because of how they were cheering so loudly for Cody.

The show, as always, was great, and the atmosphere sizzled with all the lights and the booming music.

Here are my five takeaways from the War of the Worlds show in Royal Oak on Saturday, May 12, 2018:

5 – The Villain Is The Victor

The highly anticipated 4 Corners of Survival match consisted of Kenny King, Matt Taven, SANADA (filling in for Jay Lethal) and “The Villain” Marty Scurll. Each man got to share the spotlight, showing off their greatest skills. Throughout the match, Kenny and SANADA impressed the crowd with their agility and charisma, while Matt Taven got booed heavily, and constantly got “you suck” chants. But in the end, Marty Scurll, arguably the most popular competitor of the night, maneuvered his way to victory. (I later scored a Villain Club t-shirt during intermission.) 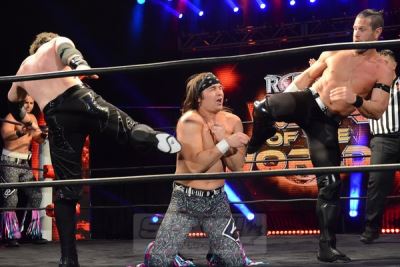 Motor City Machine Guns (Alex Shelley and Chris Sabin) prove they can kick as well as the Young Bucks.

Three of the best tag teams in ROH/NJPW squared off in Royal Oak. The Michigan crowd was split between the home-state heroes of the Motor City Machine Guns (Alex Shelley and Chris Sabin), and the Young Bucks (Nick and Matt Jackson). All three teams went back and forth in triple tag team chaos. They wowed the crowd with their high flying abilities, and show-stealing high spots. But what the Michigan didn’t see coming was the victory by Roppongi 3K. What some would call the underdogs, Yo and Sho, got the well deserved win. 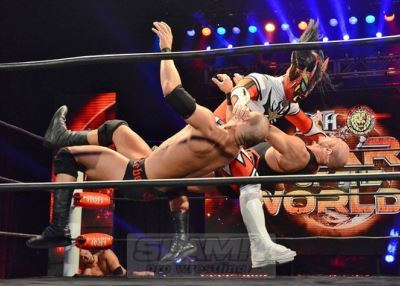 Fan favorite Cheeseburger, New Japan legend Jushin Thunder Liger and Flip Gordon picked up the hard fought win over SoCal Uncensored. Cheeseburger and Liger soaked up the applause from the Royal Oak Music Center. Then Bully Ray, a WWE Hall of Famer, attacked them from behind. The behemoth from Hell’s Kitchen powerbombed the previously injured ‘Burger, and brutally attacked both the competitors in the ring with a chain. The beating would’ve continued if it wasn’t Flip Gordon, who came in for the save. Bully Ray retreated the scene with fans chanted “We Want Devon!” 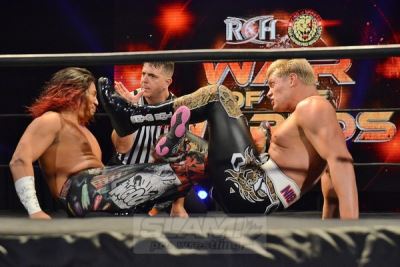 2 – Cody and Bernard the Business Bear Get Bragging Rights

Which furry duo is the best in ROH? Is it Cody and Bernard the Business Bear? Or Hiromu Takahashi and Daryl Jr.? Fans will never know for now. Things got intense during the bout between Cody and Takahashi when Daryl was used to take down Cody. Bernard didn’t have it, and looked to attack Daryl Jr. Both Cody and Hiromu had to hold back their companions from brawling, which went so far that ROH security was needed to break up the fight. The crowd erupted at the sight of Bernard and Daryl having to be held back by security, until both were ejected to the back. The not-as-furry competitors went back and forth, including Cody using his special ROH ring to knock down his opponent. And more than a few times, Rhodes openly mocked his rival, Kenny Omega, by performing his signature maneuvers, attracting a lot of hate. Cody eventually took the victory. 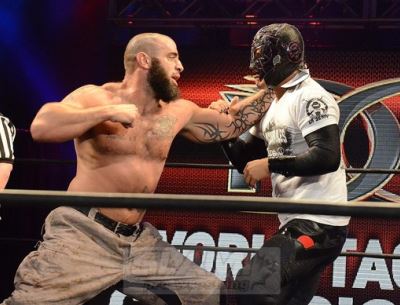 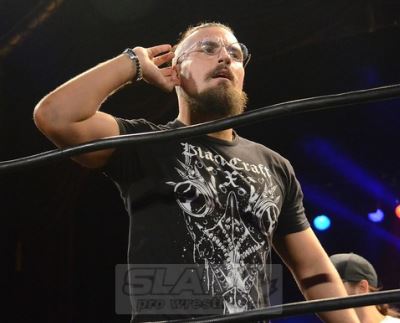 0.5 – Being The Elite closes out Royal Oak

Just when Royal Oak thought its show was over, The Elite (Cody, The Young Bucks, Marty Scurll, and Hangman Page) made a surprise appearance in the ring to film an episode of their hit YouTube series, Being The Elite. The fans in Royal Oak were ecstatic to learn they would get to see it live, especially followers of the series. Hangman Page proceeded to pick out a couple from the crowd to play a special game. The female fan was blindfolded, and tried to stick a ***** cutout onto Page (who has an obsession of having a big ***** on the show). What she didn’t expect was when she opened her blindfold, that her boyfriend would propose to her in the ring, on BTE. She said yes! To close the show, Marty “The Pop Star” Scurll, sang “My Girl” by The Temptations to close out the night.