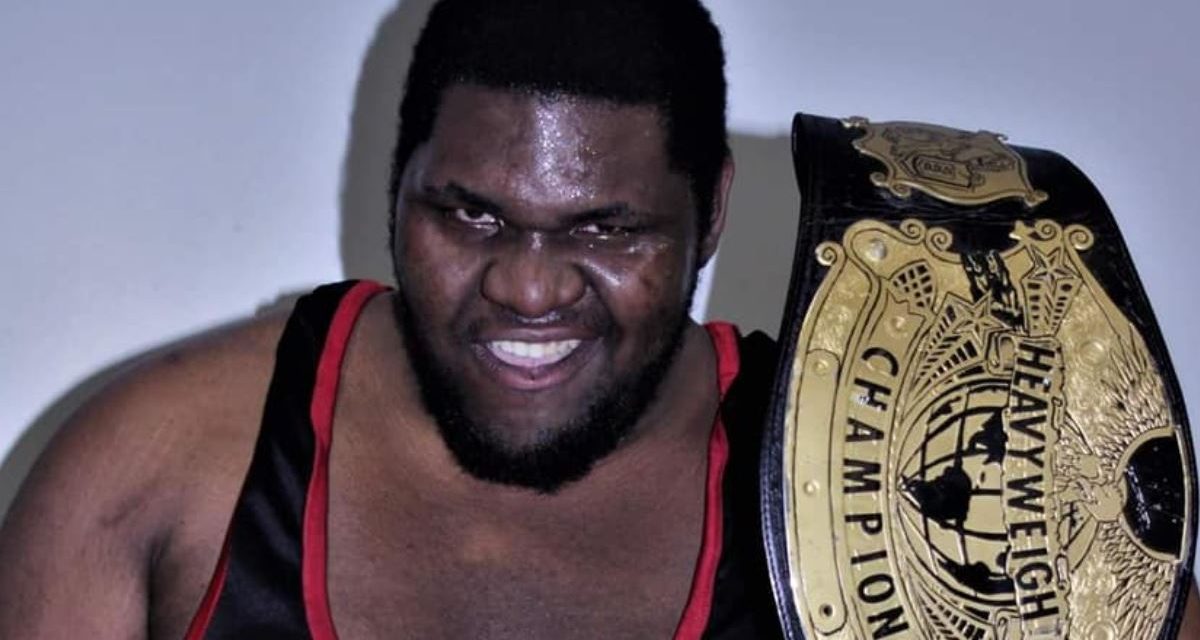 The 6-foot-3, 335-pound Terrell Kenneth steamed at this reporter’s question of “Why should people pay to see you?” The massive head, broad shoulders and imposing, frightening demeanor of Kenneth is enough to make any writer put away their pad and pen; I wondered what he could do to an opponent.

In his answer, Kenneth called out the entire wrestling world.

“I am going to be the guy to push your talent,” bellowed Kenneth. “If you have a guy who is tops in their local area I am going to be the guy to take him. If you think you are tough, then let’s see how much you can take! I do the best I can to prove a point. People should want to see me because I am a big guy who hurts people! I don’t want to say I like doing it, but if it is between their payday and my payday, well I want my payday! If it’s a choice between me or them, I would go with me.” 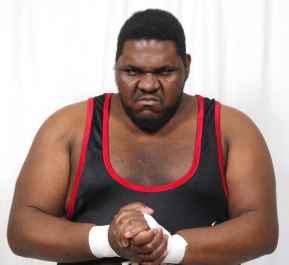 When I had the chance to watch Kenneth (real name Lamar Terill) at a recent Empire State Wrestling show I saw hard-hitting intensity. The explosive powerhouse is deceptively quick and agile, surprising opponents with a relentless barrage of punches and elbows. Just when you think it can’t get much worse for his opponent, the 27-year-old Kenneth starts to talk trash with the fans. He lets them know that he is psyched and in the zone.

Away from the ring Kenneth, who calls Buffalo, NY, home, is a soft-spoken, humble and articulate person. The character he portrays of the big bully slowly slips away when he is behind the curtain and you realize that he is releasing the character he was deeply inhabiting just minutes before.

Perhaps the character he portrays comes from his teenage days of being immersed in the arts department of his high school. Kenneth was into acting and stood out on stage.

“I was more into theatre than sports,” recalled Kenneth. “I tried playing football but it wasn’t for me. My parents wanted me to be more active with football, but it just wasn’t my thing. I just loved making people believe in what you are doing and making people suspend disbelief. I always enjoyed bringing people along on the journey.”

While the stage brought Kenneth an outlet for his creativity, it was another passion that took over around those formative years — professional wrestling.

“I have always loved it since I was a kid,” said Kenneth. “The first match I saw was a fatal four-way with Undertaker, Bret Hart, Steve Austin and Mankind. I loved it; I was just enthralled.”

With an eye on the future Kenneth found he liked watching the wrestlers who made him believe. He closely examined wrestlers who stepped into a role that touched a nerve with him.

“I was always into more of the technical wrestlers,” said Kenneth. “My favourite was Chris Benoit. When people were all about Bret Hart, I was all about Owen. When people liked Jeff Hardy, I liked Matt Hardy. I was always rooting for the ground-based underdogs. As I got older I got into Japanese wrestling with Kenta and Marufuji. Then when I got training I realized that I am big and can’t always do what the little guys do and that is when I started to watch guys like Vader and Terry Gordy. It was just one of those things where I wanted to learn all I could. My favourites growing up were no-nonsense, technical beat-down guys. I was and am very into wrestlers who can change the complexity of a match through their intensity.”

Before Kenneth could make it to the ring he needed to find a trainer and he did. Former WWE superstar Colin Delaney and Marc Hauss set the foundation for the large grappler’s mat education. “At the time there wasn’t a school in Buffalo and a bunch of us up-and-coming wrestlers would drive to Rochester every Monday to train with Colin and every Wednesday to train with Mark,” recalled Kenneth.

Under his trainers, Kenneth developed his intense style that explodes from him like a tidal wave of fury. “I am very hard hitting but surprisingly athletic,” said Kenneth. “Sometimes I surprise myself with the things I can do. My character hits people hard because he likes to bully people. All I need is one punch. I am a one punch type of guy. I do a lot of power moves. I like to surprise people with what I can do. I haven’t shown what I can do. I just beat people up and make money.” 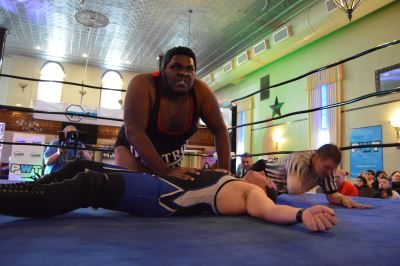 Soon Grapplers Anonymous opened in Buffalo and he continued to learn from Brandon Thurston and Pepper Parks (Braxton Sutter in Impact). He had his first match in December 2014.

ESW owner Brett Stymus has watched Kenneth evolve over the years. “He is a young, hungry guy who is going to do things,” said Stymus. “The one thing that sets him apart from a lot of guys is that he has natural intensity. Sometimes you have to teach that, but he was just a natural. If you watch him he almost lights a fire under the person he is in the ring wrestling with. I have never seen someone who is so new to this that is so intense and is pulling it off the way he is. He is getting the reaction from the crowd just like someone who has been doing this for years. He is very intimidating and a big guy. He is scary to little kids. I think people hate him because he is a monster and they can’t do anything about it.”

Currently, Kenneth tags with his mentor Brandon Thurston in rings around Western New York and Ontario as the Patron Saints of Wrestling. Thurston is a fan. “One of the biggest gifts he has, that a lot of others don’t, is intensity. The most important stuff in wrestling is not the moves but what is in between the moves. It is the way he emotes,” said Thurston. “He will do this Vader chest bump thing and boom! You go down and he will scream out; he is very intense naturally.”

Kenneth’s main base has always been ESW. “ESW got me my start and they put me in a stable with the Patron Saints of Wrestling,” said Kenneth. “I never knew what situation I would be in; it could be a tag or managing Brandon Thurston from the sidelines but I always wanted to play my part. They put me in a position where I was given different jobs and I had to do it to the best of my ability. It got me my start locally because nobody would have known me if they didn’t believe in me. It was the opportunity to get my foot in the door and I feel like I have kicked the door in but I have not walked through it yet. I am ready to make my mark there.”

Terrell Kenneth is ready to make his mark on the grand stage of professional wrestling. But fair warning to other curious journalists — you might want to pick your words carefully for the interview, or a very large index finger might start stabbing you in the chest.