The Cauliflower Alley Club will present its first Lucha Libre Award to Blue Demon Jr. at its upcoming reunion in Las Vegas. Blue Demon Jr., who has built a successful career in Mexico and around the world, was humble when asked about the recognition. 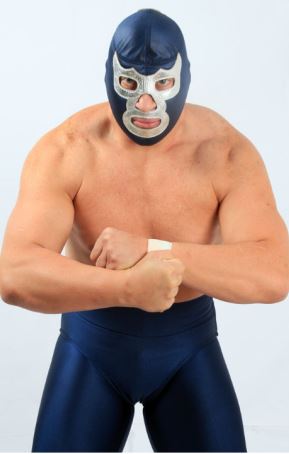 “I’m honoured and I thank the Cauliflower Alley staff. Thank you, and all the people, thank you for this. I’m the first Mexican luchador to receive this award,” Blue Demon Jr. told SLAM! Wrestling.

In addition to being the first luchador receiving the Lucha Libre Award at the Cauliflower Ally Club (though Mil Mascaras and others have received Men’s Wrestling Awards), Blue Demon Jr. became the first luchador to win the NWA World Heavyweight championship when he defeated Adam Pearce in 2008. “It’s a beautiful belt and a beautiful company. I feel great and I think that it’s a gift that is very honourable in my career and it’s very hard, and I worked very hard to win this belt.”

A luchador winning the NWA World Heavyweight championship shows the growth of lucha libre outside of Mexico. “Lucha libre is universal,” said Blue Demon Jr. who has wrestled around the world including Japan, USA, and Canada.

With the expansion of lucha libre worldwide the number of luchadores wrestling in no disqualification matches increased.

“The different matches like a street fight, for me is bulls**t. The real sport is lucha libre, which is man-to-man, one-on-one, or two-on-two. I don’t like the chairs. That is bulls**t. This isn’t real lucha libre. The real wrestling you can see with NWA, New Japan, All Japan. This is real wrestling. The Mexican lucha libre is totally different because it’s more technical, hold-for-hold. It’s not a fight, it’s technical.”

Real lucha libre holds the mask in high regard and represents Mexican culture. “It’s my culture. It’s very important for me, the Mexican culture, and the legacy,” said Blue Demon Jr. “In order to lose a mask, it is a high trophy (for the winning wrestler) for the sport. Many people don’t know the importance of the mask vs. mask. Everybody knows the trophies. The real honour in this sport is win or lose the mask, or mask vs. hair.”

Despite the popularity of lucha libre around the world its coverage on social media is low. “Well right now the social media don’t cover us. It’s very sad,” said Blue Demon Jr.

Even with the poor coverage on social media there are many people with Blue Demon Jr. tattoos and many vendors on street corners selling Blue Demon Jr. masks. “I’ve had my career for 34 years. I feel grateful because people have tattoos. I want to thank my fans, thanks for everything, thanks for supporting me, thanks for loving me. I feel comfortable and emotionally fine.”

Blue Demon Jr. uses his notoriety in public service announcements for healthy eating, and for raising money to help children with cancer.