Tony Storm hopes CAC honour gets him to the next level

Tony Storm can always rely on his biggest fans, as they are often at the shows cheering him on. His wife, and his two daughters, aged six and seven, regularly attend cards within reasonable distance of their home in Tampa, Florida.

“I have a phenomenal support system in my wife and my children,” said Storm. “They help with my merch table, help set up, carry stuff in the building. They’re my biggest fans. They understand, to an extent, about what I’m doing, but they don’t quite get the ins and the outs. Like, they know that Daddy’s a wrestler, and for them it’s still all real.” 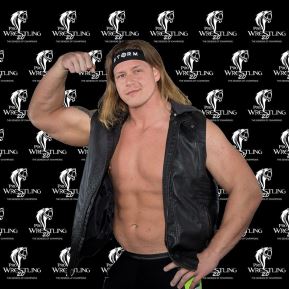 Storm (real name Tony Eveland) started his initial training in Wellman, Iowa, at the now-defunct Central Empire Wrestling Academy. Though born in Maryland, in 1985, he grew up in Iowa, which was not exactly an indy hotspot at the time. But pro wrestling, WWE fighting WCW, was big time, and popular at William Penn University in Oskaloosa, Iowa, where he got his BA in Physical Education with an emphasis on kineseology, and played on the offensive line on the National Association of Intercollegiate Athletics level football team.

Knowing how the body works helped the 6-foot, 230 pounder stay in shape, but it was his Masters in Business Leadership (also from William Penn), that has shaped his further career. In many ways, it parallels his in-ring schooling, where he further learned his craft in Tampa under Steve Keirn and Frank Reyes, and would listen and seek out advice from Frankie Lancaster, Bob Cook, Brian Blair … the list goes on. In the early days, Storm’s aim was simple: “I think my goal at that time was just to work hard enough to earn their respect.”

That’s no longer an issue. The proof is in Storm’s upcoming Men’s Wrestling Award at the Cauliflower Alley Club reunion in Las Vegas in early May.

Retired veteran Bob Cook figures he met Storm about five years ago, at a show in Riverview, Florida. “From day one he’s shown me nothing but complete and utter respect. Since that time I’ve watched him grow not only as a wrestler but as a man. He’s got a beautiful wife and awesome kids making up that wonderful All-American family we all strive and hope for one day. He’s improved so much since I first met him both in the ring and out all through hard work and that all important positive mental attitude.” Cook will be the one presenting Storm with his CAC award.

Keirn met Storm at the gym Storm was managing at the time. “I really didn’t know who he was, but the minute I walked through the front door, he knew who I was just from being a student of wrestling,” recalled Keirn. Eventually Storm began asking Keirn to attend his matches and offer up his thoughts. One thing Keirn stressed was to improve his ring outfit.

“I started giving him more of the psychology of the business, and understanding things,” said Keirn. “Like, he was going to the ring, the very first time I saw him, he was just going out to the ring without a shirt, just a pair of tights, whatever, getting in the ring. He was Average Guy. Then I pulled him aside, and I said, ‘You know, let me remind you of some of my close friends. Randy ‘Macho Man’ Savage. Randy was a good worker, but he wasn’t the greatest worker. But Randy was smart, because Randy would dress so elaborately, would have such a costume on, there ain’t no way you could put him on first. Same thing, Ric Flair. He’d come, I don’t know, $3,000, $6,000 robe, whatever, but it wasn’t a t-shirt, and it wasn’t just you coming out. It was something that made you stand out. You need to work on your presentation. What makes me remember Tony Storm at the end of the night?’ Because that’s the ultimate goal.”

Storm has a pretty full calendar of bookings, and a flexible job in the admissions department at the University of South Florida to be able to fill them. The real-life schooling has paid off. “The marketing, the finances, being able try to be smart about how much money I accept or how much money I can or cannot take, or what corners I can cut here and there — having that business degree has really been helpful.”

With an incredible work ethic, from the gym, to training, to promotion, to family life, Storm is a busy guy, and doesn’t believe in off-days. He’s all over social media and has a website that is updated regularly. It’s about selling yourself outside the ring, he said. “I have a full-blown resume that I send out to different promoters. I have videos on my YouTube channel. I have other videos that are archived, whether they’re looking for a specific type of work. Also, the fact that I’m very active on all of my social media outlets, and that I’m very interested in helping promote not only my match but the entire show, for the weeks leading up to the event. I think that’s one of those things that’s really helped is my marketing persona, and being able and willing to put myself out there.” 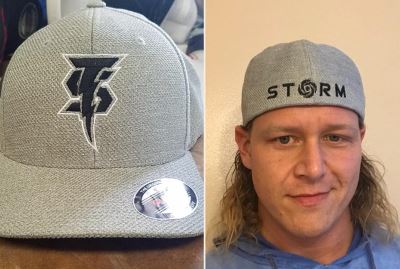 Storm is really into the promotional side of pro wrestling, including modeling his new baseball hats.

He’s also in the realm of Brock Lesnar, as being one of the few wrestlers with a sponsor. In mid-February, he announced that Discount Nutrition Tampa was backing him, offering a promo code (STORM) for discounted orders too.

Storm, who wrestles old-school — “hard hitting and high impact” — has worked throughout the southeast United States and in the Midwest, and competes as a single and in a tag team called Re-Genesis with partner Mason Price.

“Tony has been a tremendous tag partner. His style is different from mine. He brings a level of physicality that very few people can bring,” explained Price. “What’s interesting is, Tony isn’t only a physical presence. He has a great wrestling mind. One of my favourite things to do is talk wrestling and discuss match tactics/strategy during our road trips. Him and I both enjoy thinking outside the box and telling a great story inside the ring. I think the differences in our in-ring style combined with our wrestling IQ greatly complement each other. Because of that I can say without a doubt being his tag partner is fun!”

Storm is ready for the next stage. “My biggest goal, I would say for the short-term in my career, would be to get signed and make this a full-time job,” Storm said.

Price is thrilled with Storm’s CAC award, since it will help get his partner’s name out there. “I feel that Tony could work on getting more bookings outside of the Southeastern Region to expand his brand to different parts of the nation. The Southeast is very aware of Tony and his amazing abilities. It’s time for other territories, regions and countries to take notice,” said Prince. “Tony needs one opportunity in front of the the right person or people. If he is given that opportunity, they would realize, just like I and many other promoters have, that he would be an invaluable asset to any promotion or locker room.”

Naturally, WWE and NXT are on Storm’s radar, and he hopes he is on theirs. But any chance is a good one. “For me, the goal would be to go to where the biggest and the best do it, but I would never turn down an opportunity if Impact Wrestling called or ROH called and said, ‘Hey, we want to check you out.’ I’d be like, ‘Okay, I’m on a plane. Let’s go!'”