TORONTO – The crowd, peppered with lucha masks, is hot, nearing a frenzy. Their hero, the adopted son of a national treasure, is approaching. “Demonio Azul! Demonio Azul!”

After a spirited shaking of hands at ringside, Blue Demon Jr. enters the ring. The sound is thunderous.

Seen from a photographer’s standpoint, the towering masked figure high above in the overcast summer sky, basking in the applause of the thousand fans perched on the hillside, in the trees, around the ring, is more than a wrestler, more than a luchadore, more than the NWA World Heavyweight champion.

He is a superhero come to life. 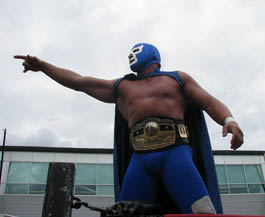 The Blue Demon towers above all. Photo by Greg Oliver.

However, backstage, Blue Demon Jr. is all man. His 43-year-old body a testament to the rigors of his profession, scars carved into rippling muscle.

And he is adamant that he is no superhero.

“I don’t think I’m a superhero. I’m a normal person. I’m a human being. Because the people give me the powers. I’m a real human. I don’t believe in superheroes,” he told SLAM! Wrestling, all the while clad in his traditional deep blue mask with white trim.

Blue Demon Jr. was in Toronto for his first-ever wrestling appearance in Canada (though he’d been to visit on vacation twice before) at a BSE Pro show at Toronto’s Harbourfront Centre, a part of the Mexico: Beyond Your Expectations festival. More than 4,000 people saw the two free shows over the weekend, great numbers for any indy show anywhere. The lineup for his autograph after Saturday’s matches was two hours long.

The lucha libre show, which also featured AAA star Incognito (Mistico) and Toronto-trained luchadores like Angel de Guerra and El Hombre, was a huge success, though curiosity was an obvious draw as much as the name stars. (“I like the guy with the mask,” said one youngster on dad’s shoulders.)

The mask, which Blue Demon Jr. almost never removes, has become a part of him, and his skill in portraying emotion through the cloth is remarkable –“You can transform your mind when you put on the mask.”

Talking about his father, his voice softens.

To him, there is only one hero, the late Blue Demon, who died in 2000. “The Demon is a real hero for me. There’s no Batman, no Superman, no American superheroes. The most great superhero for me is my father,” he said in his unpolished English, aided on occasion by amateur translator Incognito.

The original Blue Demon (Alejandro Muñoz Moreno) is often considered one of the top luchadores of all time, ranking up there with the undisputed number one, El Santo, who was a frequent foe and partner, El Canek and the more recent star Mil Mascaras.

Though his adopted father left big shoes to fill, Blue Demon Jr. feels equal pressure from his people. He is the first Latino to win the NWA World title, the first Mexican and the first masked wrestler.

“It’s a great moment for Blue Demon because the championship is most wanted for many wrestlers in the world,” he explained, listing great names like Lou Thesz and Ric Flair who have held the belt previously.

“I think I won my opportunity. I worked very hard for this opportunity,” he said. “I have a big challenge.”

A big name already in Mexico, his visage has also been seen in displays in America and Canada for the Full Throttle Blue Demon Energy Drink, which was launched in 2007. Produced by Coca-Cola, the blue drink which contains agave, was aimed at “men who know the meaning of hard work” according to the press release. “It’s a good opportunity to represent Latino people,” said Blue Demon Jr. 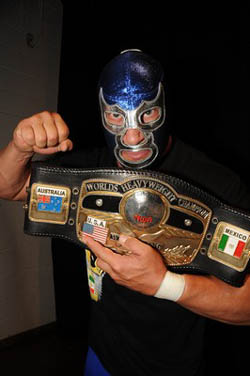 Having wrestled more than 20 years, Blue Demon Jr. brings a lot of experience to the ring. But he also doesn’t expect young foes to hold back.

“Textbook” Tyson Dux, who has had a dance on the national stage with TNA, teamed with Ash in a losing cause against Blue Demon Jr. and Angel de Guerra on Sunday’s show.

“There’s just a lot of history, and I’m all about history of wrestling. It was quite the experience. Magical,” Dux said of the bout. “The first thing he told me was, ‘Hit me really hard. Hit me as hard as you can.’ He wants a real contest. He wants to go pretty hard out there. He had no signs of age.”

The schedule as NWA World champion will continue to challenge Blue Demon Jr., traveling to various NWA outposts and lucha shows near and far. He is one of the key figures behind the scenes of the NWA Mexico promotion as well. He named Oliver John and Adam Pearce as two of the top challengers for the World title.

The fans are different place to place, he said, with Japanese fans reserved, Mexican fans passionate, and American fans are screamers.

He has never found it difficult to adapt to the different styles in the various locales. “I think the Mexican style and the wrestling is a world language,” he said. “You can speak our language in Japan, America, Mexico, in different places. You are physically and mentally able to speak every language, Japanese, American, Canadian.”