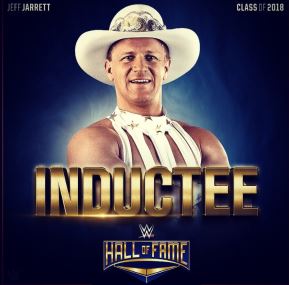 Unlike his cocky onscreen demeanour, on the phone, “Double J” admits to being humbled by the upcoming presentation WrestleMania weekend in New Orleans.

“Out of all the thousands if not tens of thousands of wrestlers that I’ve either watched or read about or heard about or down through the generations, there’s less than 200 in the [WWE] Hall of Fame, so it’s a very, very humbling honour to say the least,” Jarrett told SLAM! Wrestling.

It’s an unexpected reward on many fronts, most obviously that Jarrett was one of the key figures running TNA Wrestling, the chief competition to WWE for many years.

But then there’s the oft-talked about departure of Jarrett from WWE back in October 1999. He was leaving to to go the ever-expanding WCW. At his final show, No Mercy, where he was set to defend his Intercontinental title against Chyna after his contract had expired, Jarrett was alleged to have held up Vince McMahon for extra money just to appear on the pay-per-view.

Did time heal that wound?

“The legend continues to grow,” teased Jarrett. “At the end of the day, everyone’s going to have their opinion. I did a job that night, and got paid not only for that night’s work, but for the previous four, five, six pay-per-views and four or five house show runs. It’s debatable whether I walked out on bad terms. I’ll leave that up for conversation, because it certainly has continued to grow and make better and better conversation.”

And Jarrett’s worthiness — or not-worthiness — is part of the conversation too. Certainly, as a third-generation member of a wrestling family, with his grandmother as a promoter, and his father as a wrestler and promoter, Jeff Jarrett had a path to enter the game (once he gave up on basketball). Besides his successes in his hometown promotion in Tennessee, Jarrett was a champion in both WWF and WCW, and, of course, in TNA, where he ran the show for years until seeking out extra funding, which resulted in Dixie Carter running TNA.

Double J, recently out of WWE-sponsored rehab for alcohol addiction, relishes the debate, and the passion of the fans.

“I love when there’s debate. There’s debate in any sport. Being as I’m speaking with you Canadians, who’s in the Hockey Hall of Fame, who goes in Cooperstown or Springfield or Canton, whatever hall of fame there may be, it’s always great, debatable topics. So, I think it’s a part of the process, to say the very least.”

The WWE Hall of Fame ceremony is on Friday, April 6, at the Smoothie King Center in New Orleans. The other inductees are Bill Goldberg, Hillbilly Jim (Jim Morris), Ivory (Lisa Moretti), Mark Henry, the Dudley Boys, and Kid Rock into the celebrity wing.

Jarrett remembers wrestling in the city’s Lakefront Center often, both with WWF and WCW. “Obviously it wasn’t a weekly stop back in the territory days, that was Watts’ area,” reminisced Jarrett. “I certainly had my fair share of wrestling in New Orleans and all over Louisiana for that matter.”