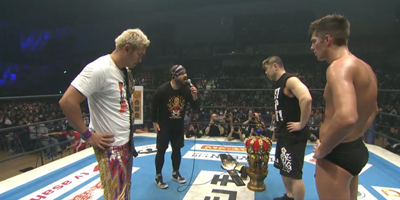 Taka Michinoku came out with Zack Sabre Jr. and introduced him and demanded that Tanahashi come to the ring. Tanahashi came to the ring and jumped around to let people know that his leg was alright.

Tanahashi mounted a comeback and hit a high-flying move for a near three-count. Sabre Jr. locked in a triangle with an armbar, which Tanahashi reversed into a Texas cloverleaf, and Sabre Jr. reversed that into an armbar.

The two hit their signature moves for a series of near falls. Tanahashi missed a high fly flow and held his knee in pain. Sabre Jr. locked in the Orienteering with Napalm Death and earned the victory via submission.

Zack Sabre Jr. was awarded the New Japan Cup trophy and gave media the middle finger. Taka Michinoku asked Sabre Jr., “what do you want next?” Sabre Jr. said that he wanted to face Okada for the IWGP heavyweight championship. Okada will defend his championship against Sabre Jr. at Sakura Genesis.

Okada held up his championship and Sabre Jr. stuck his middle finger in his face. Taka Michinoku grabbed the microphone again and said that Sabre Jr. has beat four other wrestlers to win the New Japan Cup and at Sakura Genesis he will beat Okada.

The New Japan Cup is an annual single elimination tournament. The winner of the tournament receives an opportunity to face either the IWGP heavyweight champion, IWGP intercontinental champion, or the NEVER Openweight champion.