The Mean Street Posse arrived on WWE television during the Attitude Era. Posse member Pete Gas felt that he was very fortunate to be a part of such an important and popular time in wrestling history. He also got to live out his dreams by being a part of WrestleMania.

It was in early March of 1999 that the Mean Street Posse started appearing in vignettes on WWE TV. Each segment that the Posse was featured in had the members individually talking about their group’s crazy hijinks and trouble they caused back in high school. 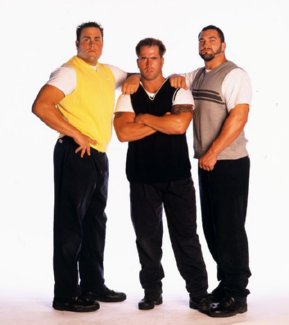 The centre of these stories was their real life friend Shane McMahon. The sweater-vest-wearing group looked every inch the preppy rich boys who reveled in discussing fights from years past.

Gas and the Mean Street Posse’s first appearance at the WWE’s biggest annual event was at WrestleMania 15. Taking place at the First Union Center in Philadelphia the Posse was not there to show their brotherly love. Shane McMahon’s pals were seated at ringside and interfered in McMahon’s match with X-Pac for the WWE European title. The group also got involved in Triple H and Kane’s match as well.

What is it like being a part of WrestleMania? Gas said it was, “One of the greatest feelings in the world.” While he was not involved in a match at WrestleMania 15, Gas was excited to be a part of the action. 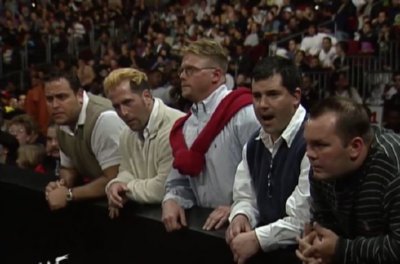 One year later, Gas would get his wish to be a full on participant in a match at WrestleMania 2000. The Mean Street Posse, by this time including Gas, Rodney and Joey Abs, were entered in the hardcore battle royal. The match had a 15-minute time limit where the hardcore title could change hands by pinfall or submission throughout the match. Whoever had the title at the end of the match would be declared the hardcore champion.

All three Posse members made history that night in their WrestleMania debut match. During the encounter Rodney won the title from Funaki. Later, Joey Abs took the championship from his pal Rodney. Finally, Pete Gas took the title, briefly, when he pinned Thrasher. The final champion at the conclusion of the match was Hardcore Holly.

“To be able to perform in front of a crowd that large and then on top of it when we did WrestleMania 2000 we actually came out and got a pop because we were doing comedy stuff and the crowd actually loved us,” recalled Gas, who put out his memoir, Looking at the Lights: My Path From Fan to a Wrestling Heel, in early 2017. “It was funny because we were doing so many goofy things with the 24/7 rule and everything and to actually get a pop, you could see when I came out I am actually pumping my fist. The crowd was cheering, and right now as I’m telling you this I have goosebumps because I was so taken back by that, it really got my adrenalin going and I couldn’t wait to get out there and perform. It was amazing. There is no bigger rush in this business, but to have it at WrestleMania that just takes it, there is nothing bigger.”

Through chance Pete Gas got involved in wrestling. Through his hard work he cemented a place for himself in the history of WrestleMania.

Caleb Smith is still waiting for his official sweater vest from Gas. He is sure it just got lost in the mail.