Wrestling fans dream of what it would be like to be in a WWE ring. Perhaps the daydream goes along the lines of being plucked from obscurity to star under the bright lights of WrestleMania. If you have ever let those fantasies cross your mind then you need to read the book that teaches us that dreams do come true.

During the WWE’s Attitude Era, the McMahon family took on an active role as characters in their weekly wrestling drama. Soon, Shane McMahon had his pals from home join him in the ring as his support group “The Mean Street Posse.” One of the Posse members was Pete Gas and he has chronicled his tale in the book Looking at the Lights: My Path From Fan to a Wrestling Heel. 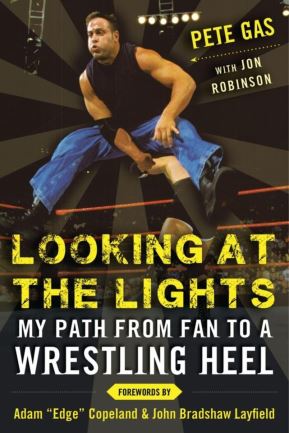 At 205 pages, Gas, along with author Jon Robinson, weave a positive tale of a young man who loved life, and is thoroughly thankful for the opportunities he has been granted. From the start of the book you will get the feeling that Pete Gas is a very positive person. Unlike other wrestling books that place blame on others for shortcomings, Gas is the opposite. He looks at life as an incredible journey and he was willing to work as hard as he could for the fans, his employer and the respect of the other wrestlers.

Respect would have to be the second theme in this tome. Gas was quite honest in his assessment of his early time in the WWE. The other wrestlers were cordial, even nice to him and the Posse members when they were seen as guys who might be around for just a few weeks.
When it became apparent that the Posse might be around for a while the experienced wrestlers resented that Gas didn’t pay his dues. What was Gas to do? He did what any positive athlete would do, work harder, keep your ears open and learn from the people such as the Acolytes and Tom Prichard. Over time the WWE crew respected the effort that Gas and his partners put into learning their craft. Punched in the face? No problem. Body aching? No problem. Gas just became obsessed with learning the art form of wrestling.

Gas provides the fans with a neat look into the Attitude Era with some fun stories. He also was able to explain the precarious nature of the wrestling business. Will you be on TV next week? Even if I work hard will I be written out of the script?

With those stresses hanging over Gas’ head he never lost his positive attitude. In fact he comes across as a guy who was incredibly happy to have been given a chance to live out his dream. It would have been easy for Gas’ ego to have gotten out of control, but it is evident that his happiness and good nature kept him grounded.

Another reason the book was so enjoyable was the conversational way in which it was written. You could easily imagine Gas sitting across from you sharing these fun tales. The book also features some insightful pictures from Gas’ childhood to the present day which adds a lot to his tale.
Pete Gas may have spent a lot of time looking at the lights in his wrestling career, but he is the true winner. The book is a fun chronicle of a man who was able to live his dream, work hard, gain respect from the boys and come out of the mat game with a smile.