Rousey has Angle on her side — and mom, too

Ronda Rousey is a phenomenal mixed martial artist. In fact, she may very well be the best female ever at it. It’s why she’s the most dominant, most celebrated, and most successful female athlete ever in the UFC. But having recently signed with WWE, Rousey is no longer a mixed martial artist, but rather a professional wrestler. Only time will tell if she’ll be able to dominate sports entertainment just as well as she did the world of “real sports.” But, as a few people who should know have predicted, it’s a pretty safe bet. 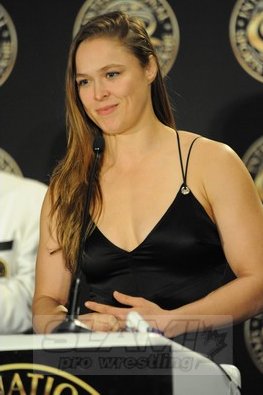 Ronda Rousey at the podium during the International Sports Hall of Fame induction ceremony in Columbus, Ohio, on Saturday, March 3, 2018. Photos by Mike Mastrandrea.

WWE Hall of Famer Kurt Angle was on-hand as a vendor guest at last weekend’s International Sports Hall of Fame ceremony, which was held as part of the annual Arnold Sports Festival USA (“Arnold Classic”), where Rousey was inducted for her prowess in “real sports.” (Angle was inducted in 2016.) As an expert who successfully transitioned from wrestling to “wrasslin'” — arguably, better than anyone else in history — Angle is banking on it.

“Actually,” he predicted during an exclusive sit-down with SLAM! Wrestling, “I think she’ll catch on better than I did. I wasn’t a fan of wrestling until I started in late ’98. I didn’t know what it was. (As an amateur wrestler) I was always told to not watch it, to not go near it. That ‘you’re the real deal, they’re not.’ But Ronda has been a fan her whole life, she’s always had an interest in it. So she got the picture from the beginning about the entertainment aspect. She has the ability to adapt to anything, including going from kicking ass to coming into where she wants to be, the (professional wrestling) business.”

Rousey’s mother, AnnMaria DeMars — herself, a former judo Olympian and multi-time world champion, and a 2016 International Sports Hall of Fame honouree — can attest to Rousey’s life-long passion for professional wrestling.

“She’s always been a fan. As she said in (her autobiography) My Fight / Your Fight, she actually did sleep with Hulk Hogan. Not the actual Hulk Hogan,” she confirmed, laughing, “but a Hulk Hogan wrestling buddy. That was one of her favourite toys, she loved that thing. She ripped the arm off so many times, when she was pretending to wrestle with it, I had to stitch its arm back on. And this was before she could talk.”

And while DeMars doesn’t really know much about the sports entertainment business, she knows that if her daughter puts her mind to something, she’ll succeed at it.

“I think the transition will go great. One of the things that people underestimate about Ronda is that she’s super smart. She’s really smart and makes some really good business decisions. So I have no doubt that it will go really well.”

As some will attest, it’s not a guarantee. Take former WCW star Bill Kazmaeir, for example. Kazmaeir is a legendary strongman competitor (and is a 2017 International Sports Hall of Fame honouree) who had a brief foray in WCW where, despite his size and strength, never really got a push while with the company. He is confident that Rousey’s experience will be much different than his own.

“Professional wrestling is a show. It’s a dance with a lot of wonderful routines. (Even though) she’s a badass, she’ll (eventually beat) everybody at the show too,” predicted Kazmaeir.

For its part, WWE has been helping with the transition, welcoming Rousey with open arms and offering a familial-type of environment.

“They had an event in Anaheim,” DeMars recounted, “and (Ronda) took her niece, who had just turned six. They put ‘Happy Birthday’ up on all the screens in the Anaheim Stadium and played the Frozen music for her. And UFC, I don’t have anything against them, but I can’t see them doing that. I think WWE is more of the thing that you can take your six-year old to. So I think in her development, that’s a really good thing to be happening.”

Angle is certainly looking forward to the chance to work with Rousey right out of the gate.

“It’s a great intro for Ronda,” he affirmed. “Ronda’s a superstar, so to have her, me, Triple H, and Stephanie in one match… that’s pretty cool. It intrigues people, so (I’m excited to see) where it goes.”

DeMars confirmed that Ronda is excited about it too. And a big part of her excitement is to be an inspiration to a new set of fans, in particular, women and girls who follow WWE.

“We’ve talked about the example she can be for women and girls,” said DeMars proudly. “She told me, ‘I really hope that when little girls ‎look at me, and look at what I’ve done, they feel like they can do whatever they want to do.'”