The first WrestleMania is known for the main event that saw special outside referee Muhammad Ali try to control the action between Paul “Mr. Wonderful” Orndorff and “Rowdy” Roddy Piper against Hulk Hogan and Mr. T. Do you remember who kicked off the show? If you said Tito Santana and The Executioner you would be almost correct. The man who opened the show was none other than announcer “Mean” Gene Okerlund. 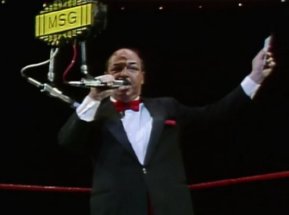 WrestleMania is known for the American national anthem being sung to start the show. Aretha Franklin, Willie Nelson, Boyz II Men, Ray Charles and Gladys Knight have all belted out “America the Beautiful.”

The McMahon family is known for being very patriotic and it seems odd that Okerlund would have been their choice to sing at their biggest event to that point. Not that Okerlund did a bad job, in fact he did just fine and was well received by the crowd at Madison Square Garden in New York City. So, what did happen?

“Somebody was a no-show or obviously I wouldn’t have been called into duty,” said the WWE Hall of Famer Okerlund at the Niagara Falls Comic Con. “There’s a lot of speculation and rumours as to who did not show at that WrestleMania one for the national anthem.”

Whoever decided to skip the event missed out on an opportunity to be a part of pop culture history. Okerlund had a front row seat for not only the event, but the preparations leading up to the big event.

“You know a lot of that just fell into place,” recalled Okerlund. “In those days a lot of things of that age that were kind of spontaneous.” Okerlund is the prime example of things being spontaneous as he pulled double duty interviewing and singing.

One of the big draws of that first WrestleMania was television mega star Mr. T. His show The A Team, was a huge ratings hit. Mr. T had appeared in Rocky III as the intense battering beast known as Clubber Lang. In that same movie a young behemoth of a wrestler shared the screen with star Sylvester Stallone and that was Hulk Hogan.

Ever the marketing genius Vince McMahon thought that the pairing of TV good guy Mr. T and champion Hulk Hogan would make his event a success and draw in mainstream media to wrestling. Well, it worked and the first WrestleMania was a national phenomenon.

Not everything went as planned in the lead up to WrestleMania. Mr. T was not the shining knight in real life that he presented on the small screen.

“Mr. T, you know I inducted him into the Hall of Fame and I don’t really have a great opinion of him as a human being,” said Okerlund with a sigh. “Liberace was a pro, he had the ring that popped up a piano; Mr. T said, ‘Brother, I gotta get my head straight. I gotta get out in the limo,’ right when we are doing business and he wasn’t a real cooperative guy. He certainly made a big name for himself with The A Team and being in the main events of both WrestleMania I and II. I can’t put the guy over because I really didn’t like him that much.”

Gene Okerlund has done it all in sports entertainment. He is an example of a true professional who was willing to do whatever was necessary to make sure the show went on.