If you cage a wild animal, two things can happen: either it will eventually succumb to the reality that it’s trapped and then wither away a broken shell; or it can harness its energy until the door eventually opens, at which point it will ferociously uncoil and mow over anything in its way. In his current role as RAW General Manager, WWE Hall of Famer Kurt Angle has been given very limited opportunity to compete in the ring. When that door gets opened again, everyone had better stand back.

“I’m a wrestler,” he told SLAM! Wrestling during an exclusive sit-down at last weekend’s Arnold Sports and Fitness Expo (also known as the Arnold Classic) in Columbus, Ohio, where Angle was appearing as a vendor guest. 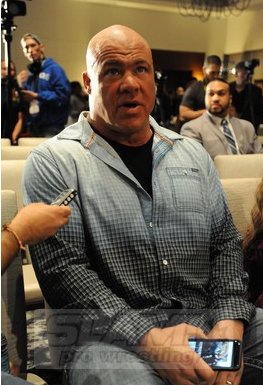 “I like to get in there and put on the best matches that I can. I do love the GM role,” he assured, “it’s a great role for me right now… but I’m happier when I’m in the ring wrestling.”

So the announcement last week, that Angle will be competing at WrestleMania next month, teaming with Ronda Rousey against Triple H and Stephanie McMahon, was a definite high moment for Angle since returning to the company last year. Though Angle did have a couple of matches since returning, he predicted that this one will be even better in terms of his ability to perform.

“Because now I’m 100 percent healthy,” he explained. At Survivor Series and TLC, I had a torn muscle in my leg — I couldn’t use my right leg — and it really limited me. So, when I get in the ring (at Mania, you’ll see a lot better Kurt Angle.”

Furthering the storyline and hype for the match will be just one of Angle’s many responsibilities over the next few weeks, both on TV and off.

“Things get really hectic, a lot crazier than usual” he noted. “We actually call (the next few weeks) WrestleMania month. You have to be ready, because they’re going to book you for appearances, interviews, in addition to TV. I don’t have a day off from next week until April 9th. And that’s how it gets for every wrestler in WWE. Everyone helps promote it because it’s the biggest show of all.”

And while Angle’s match at that show is certainly going to be a huge one in terms of positioning on the card – and likely will be the most high-profile in terms of mainstream hype given Rousey’s involvement, he still has his sights on once again being the show’s top headliner. 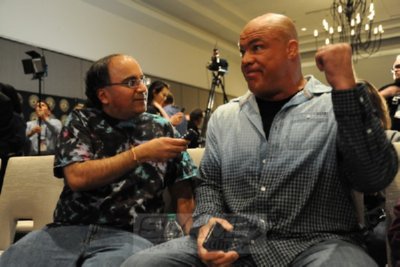 Kurt Angle, right (but you knew that), gets worked up during his chat with SLAM! Wrestling’s Bob Kapur.

“I wouldn’t mind main-eventing WrestleMania again,” he admitted. “I don’t need to, so I probably won’t end up doing it. But I wouldn’t mind doing it one more time. (maybe with) Seth Rollins, Dean Ambrose, Roman Reigns — I love those guys, they’re all awesome. Or AJ Styles. I know what kind of matches I can have against those guys.”

“I actually signed for another year, so we’ll see if I continue to be the GM or if I go somewhere else, maybe get that chance. For right now, I think the plans are to stick with the GM spot (as my primary role) for now.”

Regardless of what his role may be, Angle is very happy with his return, and what it means for his fans and moreso his family.

“I came (back) for the fans. For everybody that wanted me to come back. And, “he said, picking up his youngest daughter who was patiently waiting beside Angle for the interview to conclude, “my youngest kid never got to see me in a WWE ring. My three little ones, this is pretty cool for them. They get to come with me every once in a while, and they get to see what Daddy does for a living.”