WWE returned to Detroit, at the recently-opened Little Caesars Arena, as the buildup to WrestleMania 34 continues. From my seat on the floor, with my dad popping up to take photos, I made some notes and came up with five things that I learned. 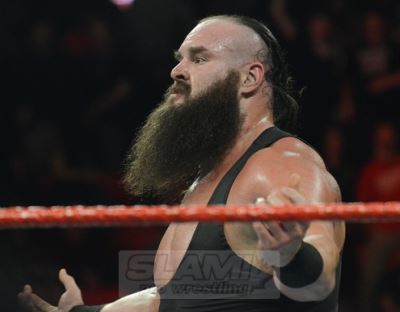 The Universal Champion, Brock Lesnar, was set to appear at RAW in Detroit. But much like recent weeks, he has not been seen during his scheduled appearance. The news was broken to the WWE Universe by GM Kurt Angle, who explained that he had no clue where his main champion was. This led to an angry Roman Reigns (Brock’s challenger at Mania) to lash out on Kurt Angle, claiming that Brock was “Vince’s boy.” Shortly after on the big screen, we see Roman leave Vince McMahon’s office. Mr. McMahon would then tell Renee Young, that due to Reigns actions, he has been suspended.

John Cena had the crowd up and on their feet. The Franchise started to get into a speech on how he lost his opportunities to get to WrestleMania, but he had a plan in mind. Oh yes, he would get to WrestleMania by buying a ticket and sitting with the crowd. This resulted in John playing around with the Detroit faithful, and even drinking some of a fan’s beer. But then, Cena supposedly said something he wasn’t allowed to do, and that was call out The Undertaker. The crowd was hotter than ever, as Cena continued to take jabs at The Undertaker, which heightened the excitement for the dream match to occur. 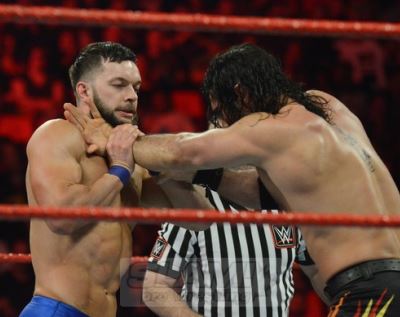 Finn Balor and Seth Rollins battle it out.

3 – Finn Balor and Seth Rollins put on a classic

After appearing on Miz TV earlier in the night, two-thirds of the Intercontinental title match at WrestleMania faced off against each other. Finn Balor and Seth Rollins put on the unanimous match of the night. The two went back in forth in hard-hitting action. Eventually, Seth Rollins pulled of a superplex to Balor, until Finn rolled up Seth for the win. 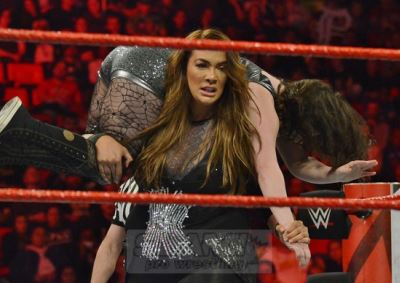 Nia Jax has no problem with Joan King.

The “Irresistible Force” Nia Jax quickly finished off a local talent, but then her attention was turned to the TitanTron. Her best friend Alexa Bliss was caught talking about Nia to Mickie James. Alexa went on about how she’s using Nia, and how Nia was always the outsider. She continued to insult her until interviewer Charly Caruso informed Alexa that her mic was on the entire time. Alexa and Mickie quickly scattered out of their backstage room, which was destroyed after a distraught Nia Jax had a massive breakdown.

The main event of the evening saw a tag team battle royal between The Revival, Titus World Wide, Heath Slater and Rhyno, Gallows and Anderson, and The Miztourage, to determine The Bar’s opponents at WrestleMania. The match was about to start, until Braun Strowman marched to the ring. Braun went straight to work, eliminating Apollo. Heath Slater was eliminated shortly after. Next was Rhyno, which received a loud chorus of boos from the hometown crowd. The rest of the participants worked together for the rest of the match to try and take out Braun. But they all failed, as Braun Strowman threw out Karl Anderson to win the battle royal. Which leaves the question… how will Braun compete against Sheamus and Cesaro at WrestleMania by himself?