‘Please come back’ is the chant that drives Ted Hart

Teddy Hart has always been an enigma. While being one of the most talented wrestlers of his generation, personal problems and politics in wrestling have always held him back. Now, at the age of 38, Hart seems to have turned the page and is ready for a new start to his career.

In a recent interview with SLAM! Wrestling Hart was optimistic about his future. “I have been able to get 65 bookings in the past seven months and the number keeps growing,” said Hart. “Also, I am working on a best of Teddy Hart DVD compilation that features all of my best matches. Over the past 15 years, I feel like I have been in some of the top matches in the industry and I would like all the fans to see them.” 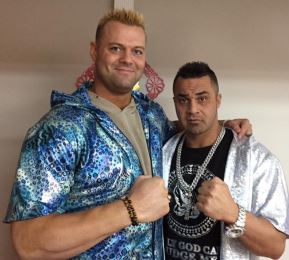 If Hart is concerned about his relatively advanced years for a wrestler, he certainly does not show it. “I have only really had one injury in my career. I have always maintained conditioning and stretching. I have adapted my wrestling style. I still do the high-flying stuff but also do more power moves and MMA style. I like to show I can wrestle different styles and the fans like to see something different.”

Something Hart kept returning to during the interview was his love for wrestling and the fans. “It is what has got me through all these years,” said Hart. “I still want to give people the best match of the night every time I go out there. I know I have a certain reputation and love that people think I’m crazy. That’s why it is great to see the reaction of people when I am the last guy signing autographs at the end of the night or giving kids a high five. They realize I am not such a bad guy.”

Hart’s use of and adoration of cats is perhaps another way to promote his image. His Persian cat, Mr. Money, became almost a bigger star and source of conversation in the wrestling world than Hart. “I found that bringing Mr. Money to the ring was a great way to break down stereotypes about me,” commented Hart. “Some of the wrestlers might have thought I was a jerk but most people love cats. Also, it was a great way for fans to interact with me. They might be nervous to approach Teddy Hart but having Mr. Money was a great introduction.”

Hart does have a genuine affection for Persian cats and for a time, it was also a lucrative business. “I sold Persian cats for about four or five years. We had people buying cats from all over North America. They would come to our house and we had almost a cat cafe. We had dozens of cats in the house. It was cool to see the joy that it brought to people.”

One particular highlight for Hart is the time he spent down in Mexico with Triple AAA wrestling. “I moved down there for about two and a half years and had a real great run with Jack Evans. Down there, people treat you like a rock star. Certain parts of the country are really poor but the fans are amazing. They treat it like a real sport and with respect.”

Hart doesn’t shy away from his controversial past whether in referring to his personal life or as a wrestler. “I went through a bitter divorce and also spent some time in jail,” admitted Hart. “I beat all the charges and am looking to move on in my life. I also went to WWE [sponsored] rehab.”

Perhaps most surprising is the change of direction for Hart in regards to marijuana. Hart was an admitted frequent user of pot and often extolled its virtues in interviews. “I stopped smoking pot for awhile. Honestly, there was some interest from the WWE so I didn’t want to test positive. Also, my divorce and the downturn of the oil and gas industry affected my cash flow,” said the Calgary, Alberta, native. “I didn’t want to have such an expensive habit. I notice my body does not heal up as quickly but I have more clarity to my thinking.”

Despite everything that has happened to Hart, he’s gung ho to keep going. “I still love wrestling. When promoters and fans meet me, they realize a lot of the stuff said about me is bull—-. I am getting more bookings than at almost any other time in my career and I have been having talks with Impact Wrestling. The most important chant I can hear from fans is ‘Please Come Back.’ That is when I know I have done my job.”

Fans will have a chance to chant “Please come back” when Hart makes his debut for C4 Wrestling on March 17th in Ottawa. He will also be wrestling in Oshawa on March 18th for Pro Wrestling Eclipse.