Thanks to his unique high-flying style and his charismatic personality, Flip Gordon has seemingly instantly won over fans in Ring of Honor and New Japan Pro Wrestling. No doubt, he is a star on the rise in the wrestling business. 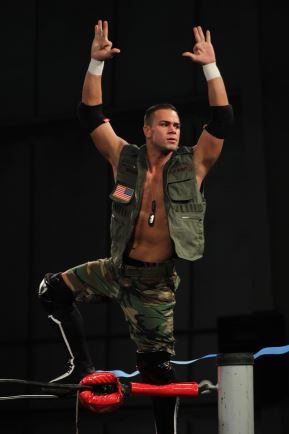 In less than three years in wrestling he was awarded a Ring of Honor contract and wrestled for New Japan Pro Wrestling. But he didn’t do it alone, and he brought up some folks who have helped Gordon reach his goals.

“The Young Bucks have been huge mentors to me and helped me so much. Bubba Ray Dudley has been a huge help too. He’s always giving me feedback, always giving me pointers, and it’s really helpful because he’s about to be a Hall of Famer. To just have a guy like that in the locker room to get feedback is amazing,” he said.

“They all tell me I’m on the right track and to keep doing what I’m doing. I’m almost three years in so I’m not going to be the greatest wrestler. They always give me little pointers and when I get those pointers I try to fix them so that I don’t have to be told the same thing twice.”

Being a fast learner has made Gordon’s ascension up the wrestling ranks quicker than most.

Flip Gordon’s wrestling journey began in 2015. He checked out Booker T and Lance Storm’s wrestling school before deciding on training under Brian Fury at the New England Pro Wrestling Academy. “They had such good feedback from past students, and had a good track record as well. If you look at students coming out of there: Donovan Dijak, Sasha Banks, Kofi Kingston, Damien Sandow, and Darren Young. I looked at that and I was like, ‘This is the place to be. This is a good training system.’ Sure enough when I went there, it is the best training school I’ve seen yet. Brian Fury definitely knows his stuff, and he is one of the best trainers in the world. WWE invited him down to be a guest trainer because that’s how good he is as a trainer,” said Gordon.

While WWE may come calling down the road, Gordon is more than content in his current position with an ROH contract. “Right now, I’m happy where I’m at, travelling the world and learning every single day. It’s been a blessing.”

Gordon got his first big break when he was signed to a Ring of Honor contract in April of 2017, which resulted from his performance at a January 2017 ROH tryout “After the tryout they invited me to a booking in Baltimore, Maryland, and I wrestled Matt Sydal and I had a really good match with Matt Sydal, and they obviously loved it and after the match the fans chanted, ‘Please sign Flip,’ and I guess they listened and they reached out to me and I eventually signed with them.” 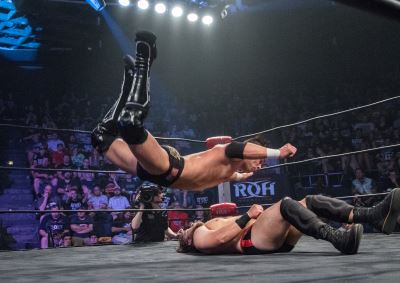 There was an instant connection between Gordon and the ROH fans. Gordon attributes his charisma to the fact that he wants to be in the ring. “I genuinely love this and I love it so much that fans can see it, they can see the passion and how much fun I am having in the ring. I think since I’m having fun, they are also having fun,” said Gordon.

This instant connection carried over to Tokyo in the New Japan Pro Wrestling Honor Rising 2018 events with signs that had the words “please sign Flip” written on them.

“Japan is amazing, and to go there after three years of my career is so surreal and I can’t wait to go back. The Japanese crowd is absolutely amazing. It’s a completely different style. I remember the next day Kevin Kelly (NJPW commentator), I had breakfast with him in the hotel and he gave me so many pointers, and I think that’s why on night two, I feel like I had a better match. I took those pointers and applied them to my work.”

The two matches that Gordon worked in Japan were held at the legendary Korakuen Hall with its tight seating and a low ceiling, which amplifies the sound and gives a unique vibe.

“The atmosphere is so special. When I came out it was so special that I couldn’t help but to just smile. I felt so accomplished stepping out of that curtain seeing those fans and realizing, ‘Hey, in less than three years I’m living a dream, traveling the world.’ I’m in front of this Japanese crowd debuting for New Japan Pro Wrestling and that crowd has just welcomed me with open arms. It’s such an amazing feeling,” said Gordon.

During the first night of Honor Rising 2018, Gordon defeated Hiromu Takahashi, and Kushida in a three-way match. “Hiromu Takahashi and Kushida are two of the best juniors in the world and sharing the ring with them was an absolute honour and I’m really looking forward to seeing Takahashi in Vegas on the 16th anniversary pay-per-view. It’s going to be a really cool match and I think it’s going to be a must-see match.”

Other matches on the card: