Q & A with Liam O’Rourke, author of Crazy Like a Fox

Liam O’Rourke is the author behind the much-praised biography Crazy Like A Fox: The Definitive Chronicle of Brian Pillman 20 Years Later. He talks to SLAM! Wrestling in a question and answer session about the book.

SLAM! Wrestling: How did you get so many people to agree to participate in interviews for this book?

LIAM O’ROURKE: One of the really refreshing elements of putting the book together was that the people I spoke to really wanted to talk about Brian. It wasn’t always easy to contact certain people, but as soon as I did, it was all totally positive. I think it says something about the subject that 20 years later people are so eager to talk about him, especially once my intentions of putting together something that would really do him justice came to the forefront. But yeah, relentless persistence was key in trying to make that first contact with folks. I very much had the attitude of, “This either gets done right or it doesn’t see the light of day,” which was a great motivator to stay on track and keep pressing on.

SLAM! Wrestling: One of the main features of this book is the detailed timeline of Brian’s life. It seems as if very little is glossed over. Why did you decide to go into such detail about his background?

LIAM O’ROURKE: To me, the detail is the reason for the book’s existence. There’s a general knowledge of Brian’s story amongst wrestling fans, that didn’t need to be retold. However, there isn’t a wide knowledge of exactly what really happened, blow by blow, in detail, and that’s the stuff that makes Brian’s case so captivating and so unique. It’s one thing to say, “Brian was a small football player but he made the NFL,” and it’s another thing to really look at the situation, break down what happened and actually understand how and why he did it, to see how incredible that achievement really was. There’s so much to Brian, his life story was so layered, that to reduce his talent and accolades to such a general overview (as they did in the WWE’s DVD of him, by and large) is a gross injustice, and I really wanted to rectify that. The story of the Loose Cannon is another classic example — people know he played a character 24/7, worked Eric Bischoff to create a bidding war and get a contract release, but how did it happen exactly? What were the motivations, what did Brian study to prepare for it, what did he learn, what was his approach, what was his mentality, how did he pull it off, what was the ebb and flow of events, what triggered what… and answering all those questions speaks so much to not only how remarkable he and his situation was, but tells you a lot about the wrestling business and the attitude at the time. That’s the case throughout his entire life and throughout the book, I think. 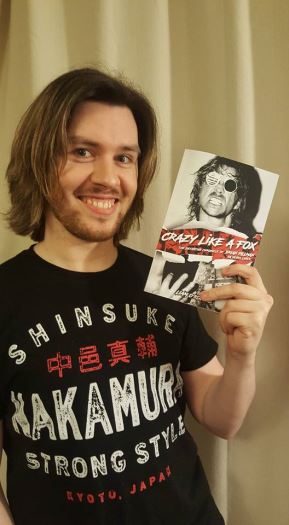 Liam O’Rourke and his book.

SLAM! Wrestling: This story paints a complex picture of Pillman that shows him in so many different lights. How did you stay true to his story and not shy away from some of the more difficult aspects of his personality?

LIAM O’ROURKE: Brian was a very complex guy, and early on in the process it became clear that if you sidestep any element of his personality, you’re missing a valuable piece of the puzzle. The charm to him, part of what is endearing or fascinating, however you interpret it, is his uniqueness as an individual. That he can be Brian Pillman the athlete, Brian Pillman the jock, Brian Pillman the scholar, Brian Pillman the wildman, Brian Pillman the sensitive soul, Brian Pillman the tough guy, Brian Pillman the father… at any given time, he’s just all over the page. While I admire him in many ways, there’s no desire from me to be anything other than honest and explore this incredible life story. The foibles and idiosyncrasies are part of what makes his story worth telling. It isn’t a whitewash tale, there is a “warts and all” element to it, not because there’s a narrative I wanted to push, but because it’s what actually happened. In some ways those elements contributed to some of his successes, and for the sake of accuracy you have to include them. So to answer the question, it was actually easy to stay true to the story and incorporate some of those difficult aspects, because they are inextricably linked. To me, you can’t tell the real story without them. A character is defined by the actions he takes and reactions to the situations he finds himself in, and the reason he’s so interesting is because his actions and reactions weren’t the same as everybody else. At all.

SLAM! Wrestling: Brian was without a doubt an achiever. Do you feel his drive was a double-edged sword?

LIAM O’ROURKE: Absolutely. And what’s interesting is that I think you can see it in a lot of the guys of his ilk, the Chris Benoits and the Eddie Guerreros of the world. The types that, with the business being what it was at the time, were always going to have difficulties breaking out and being successful due to the inherent size prejudices, unless they had that abnormally heightened internal drive to succeed. Brian had it in him before wrestling, it’s just the way he was wired, which comes out in the book when you look at the things he was doing to be exceptional at Miami of Ohio or in the Bengals mini-camp. One of the real issues is that, in many ways, there are things Brian did to get ahead that, really, he didn’t need to do to be good enough, but he did them because he felt he had to. Things like adding so much size through steroids to get coaches to take him seriously, even though he had the stats to warrant the position and respect he craved, he just wouldn’t be afforded the chance because of the stubbornness of the system. So he took whatever extra step he needed, since it was the only way to get ahead. Ultimately, it bleeds through to his wrestling career, but without that drive, is Brian Pillman special? Does he have a legacy as somebody on the cutting edge, on the cusp of megastardom on multiple occasions, if he doesn’t have that determination to be exceptional? Probably not. But like you say, his life is probably longer too if that wasn’t the case.

SLAM! Wrestling: Have you had any feedback from the wrestling community about this book?

LIAM O’ROURKE: So far it’s all been very positive, and I think it’s going to continue to grow. I didn’t set out with a lofty goal with the book, I just thought the story, as I had researched it, was amazing and needed to be told correctly, in full. So to hear people praising the book as strongly as they have been has been extremely rewarding. I think some of the best feedback is hearing people that knew him best say that not only did it capture Brian perfectly, but captured the business as it was at the time as well. Particularly from a political standpoint and the stuff going on behind the scenes, that was very important to get right, to let the reader see things through Brian’s eyes. 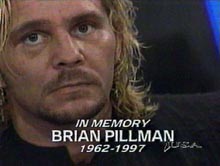 SLAM! Wrestling: The most moving chapters are the ones towards the end of his life and after. As a reader you feel a certain bond for Brian and are cheering him on only to see the hero falter. How were you able to create such a layered story that keeps the reader invested in the subject?

LIAM O’ROURKE: Simply put, the story itself is rich enough that, so long as I did a halfway decent job telling it, that’s the way it’s going come off. After years and years and years of Brian kicking and clawing through the insanity and politics trying to forge a path to greatness, he finds a way to do it — his way. He uses his natural born talents to win over the entire world, he manipulates the manipulators and he beats the system. He’s finally figured it all out, the guy that looked at the business as an outsider in some respects, because it wasn’t his dream growing up. That element of detachment, even though he came to love the business, allowed him to see wrestling for what it was, and helped him look at it through a less-clouded lens than most. As a result, he’d become the most complete version of himself at the perfect time and the best years of his career were ahead of him. But back to that double-edged sword we go, and unfortunately we see him falter. Even knowing the story, doing the interviews, understanding the context I wanted to frame Brian’s journey in, it was still utterly heartbreaking to write. To actually put this emotional rollercoaster on paper, particularly the chapters near the end as you say, it put me in a mild state of depression for a couple of days because it’s just so sad. Brian had such a special quality, an aura, where you can really appreciate his drive and talent. He’s so bold, so audacious, so determined and so talented, and he becomes such a chancer that you really want to see him pull it off and make it to the top. And he almost did.

SLAM! Wrestling: Has Brian’s last wife had anything to say about the story?

LIAM O’ROURKE: Nothing. There’s a lot going on in Melanie’s life, it wouldn’t be her primary concern, let’s put it that way.

SLAM! Wrestling: Tell me about your wrestling fandom.

LIAM O’ROURKE: Been a fan since I was six — my older brother has five years on me and he was a fan before I was, so it was a steady stream of early ’90s WCW and WWF in my household for me to observe from afar and I fell in love with it quickly. From there I was just obsessed like so many others, devouring every tape or morsel of information I could, wanting to know more. Trained to wrestle in 2002/2003 at the FWA Academy in Portsmouth and have wrestled locally on and off for years, been a student of the business the entire time. Got a degree in Journalism and Editorial Design, so writing has always been an underlying passion as well, but it was never a set goal to write a wrestling book. It just sort of fell into place because I’m such an obsessive of learning the business that it dawned on me one day — I have so much information on Pillman that most don’t know or have access to, that I’m actually in a position to put something together here that could really contribute. There was always something intangible that caught my eye about Brian from the very beginning, that followed through to me training and wrestling, that I thought was magical, something I either wanted to capture or see captured by somebody else. Two decades on you realize you can’t. That’s why it’s special in the first place.