The Honky Tonk Man is promising to provide “a behind the scenes look at all the dirty little secrets of WWE and the pro wrestling business” as he brings his “Shake, Rattle, and Roll Comedy Tour” through the Northeast and Upstate New York next week.

“This as a chance for fans to go behind the curtain and hear the real stories,” Honky Tonk said in an interview with SLAM! Wrestling.

The 90-minute one-man shows are part stand-up comedy and part road stories culled from his 40-years in the wrestling business, including his record-setting 64-week run as WWF Intercontinental champion, he said. 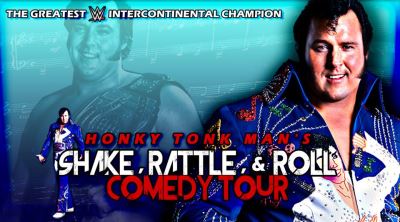 Honky Tonk (better known to friends and family as Roy Wayne Farris) said that other wrestlers are getting credit for starting the one-man show act, but he was ahead of the curve.

“Everybody talks about how Mick Foley is doing them, Jake Roberts is doing them, Hacksaw (Jim Duggan) is doing them. I was talking to Lanny Poffo the other day and I said, ‘Lanny, they’re all talking about how they’re starting this stuff. Everyone knows, we started this whole thing.’ About 10 years ago, Lanny and I did one in the St. Louis area. We did it and the guy who put it together didn’t have any money, so we didn’t get paid. So that was the end of Lanny and I doing stand-up comedy for about 10 years.”

Of course, there’s nothing The Honky Tonk Man enjoys more than entertaining, and stand-up opportunities remained in the back of his mind.

“It was just a situation where the timing wasn’t right,” he said. “I was too busy with independent wrestling shows. When I would do training seminars, I would do some similar stuff. I would throw in jokes and fun, about each guy in the ring and different things about wrestling and all that. I kind of had a little routine all worked out.”

Last year, Honky Tonk had the opportunity to try his act overseas, performing 18 shows in England.

“After 18 sellout shows there, I wanted to bring it back to the States,” he said.

On top of comedy (and most likely at least one musical number), Honky Tonk promised that he will be a straight shooter.

“I’m a no-holds barred kind of guy,” he said. “I’m not pandering to get a job in WWE. I say what I say and what I know is true. I talk about Jim Ross and all the bullshit he says on his podcast. I talk about Stone Cold and Jake Roberts. Hulk Hogan, of course. I mix humor with real road stories and behind-the-scenes locker room stories.”

More information on the “Shake, Rattle, and Roll Comedy Tour” can be found at facebook.com/HTMOneManShow.