Steven Verrier’s Professional Wrestling in the Pacific Northwest A History, 1883 to the Present is the most comprehensive book that has been written about the region. The book examines Professional Wrestling from its early days in the 19th century in the states of Oregon and Washington, and the province of British Columbia, all the way up to 2017. Such an undertaking could not have been easy for Verrier, as balancing out material from over a 134 years could easily have gone awry; yet, Verrier succeeds admirably weaving decades of material into a coherent whole. 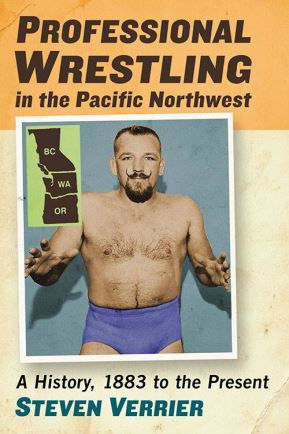 Perhaps the most intriguing aspects of Professional Wrestling in the Pacific Northwest comes from the early decades covered. Discovering that Bellingham, Washington was a prominent center for professional wrestling in the early 20th century was honestly a surprise and is something that I would like to see Verrier write about further in perhaps a future book. (Verrier, an occasional SLAM! Wrestling contributor did write a piece for the site on it, though: Bellingham, Washington: The unlikeliest of wrestling capitals).

One of book’s biggest strengths is the way prominent figures in the Pacific Northwest, and their successors, are threaded down through the decades and between Oregon, Washington, and British Columbia. For example, Verrier expertly details how Oregon promoter Herb Owen got his start in professional wrestling in 1927, and later on how his sons, and grandson, impacted wrestling in Washington and British Columbia. As well, Verrier details each wrestling luminary who was ever featured in the Pacific Northwest, from Frank Gotch to Daniel Bryan, in terms of their impact on the region, who they wrestled, and what happened to them after they left.

The writing style utilized throughout Professional Wrestling in the Pacific Northwest is one that flows quite well and has been notated throughout to let the reader know where Verrier was drawing his information from. Perhaps one of the best examples of Verrier’s writing prose, and one of the most fun sections to read, is when he describes the battles from 1937 to the late 1940s between Percy Hicks’ Big Time Wrestling promotion in British Columbia and his competitors the Vancouver Wrestling Club and the Pender Wrestling Club. In a lot of ways Verrier’s description of some of the underhanded tactics employed during these promotional battles were reminiscent of what wrestling fans may remember happened between World Wrestling Entertainment and its competitors in the 1980s and 1990s.

The book does, though, open up some questions about certain events and why things happened as they did. A good example of this is when Verrier states that women’s wrestling was banned in the state of Oregon in 1945 for over 30 years without providing an explanation as to why the ban happened and what led to it being rescinded 30 years later. As well, the reader is left to speculate as to why Don Owen’s application to join the National Wrestling Alliance was accepted in 1951 while rival Oregon promoter Ted Thye was rejected.

EDITOR’S NOTE: Watch for a Q&A down the road with Steven Verrier on SLAM! Wrestling.