The first time I met Larry Matysik, I was a 15-year-old high school kid who had somehow convinced her journalism teacher to let her write about Wrestling at the Chase in the school paper. I had read Larry’s first book, Wrestling at the Chase: The Inside Story of Sam Muchnick and the Legends of Professional Wrestling, and found out that he would be doing a book signing at the Pro Wrestling Shirt Shop, right down the street from my high school.

I showed up to the meet-and-greet/interview with a list of questions, some with page-number references from Larry’s book. Larry took all the time in the world to answer my questions (some I’m sure were ridiculous or self-explanatory) and to get to know more about me as a person. He even made this shy, awkward teen take a photo with him as he raised my hand while I held a replica championship belt. 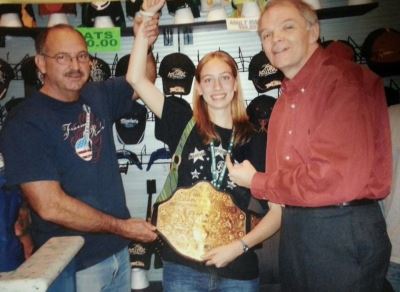 Lee Warren, a referee for Wrestling at the Chase, a 15-year-old Kari Williams, and Larry Matysik.

What stood out the most, though, was his answer to my last question, “What are your thoughts on Vince McMahon?” (Which I asked with a nervous chuckle, as only a high school journalist would do.) As we sat across from each other, our hands resting just spaces apart on the counter, Larry said, “I wouldn’t trust him from my hand to yours.”

More than a decade later, I still think of that interaction. But what’s more is that he took a vested interested in a random high school student who had a crazy dream of getting into professional wrestling journalism.

He became more than a source. He became a mentor. When I had a rough time with high school journalism politics, he let me vent to him and reminded me why I love this industry. When I had to choose between taking a guaranteed job offer or hoping that the time I spent as a copy editor intern would garner me a full-time spot down the road, he was there. When I attended the George Tragos/Lou Thesz Pro Wrestling Hall of Fame a few years back for Larry’s Jim Melby Award for his contributions to pro wrestling journalism, that was the beginning of my contributions to this website.

Larry has been there, in one way or another, for almost every major event in my career. (I even ended up attending his alma mater, Southern Illinois University Edwardsville, to study journalism.) I believe with all my heart that I would not be where I am if not for him. Larry makes everyone who meets him feel important and like their dreams and aspirations matter.

Even though he knew and encouraged my dreams of one day getting paid to write about pro wrestling, he always jokingly told me to get out of the business. I don’t know if he ever realized that he’s one of the reasons I wanted to be involved. His book drew me into the world of old-school, St. Louis wrestling. He deepened my appreciation for the history and psychology of the sport. (His thinking is why I love when wrestlers make their entrance without music — they should be able to elicit a reaction based on their character, not a song — and why I sometimes get peeved when wrestlers get into altercations before they’ve ever locked up in the ring.) 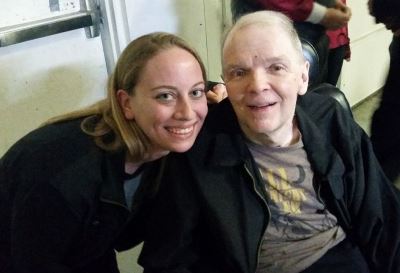 Kari Williams and Larry Matysik at a SICW show in February 2017.

There’s nobody like Larry. He’s one of a kind. Down to earth. And someone I’m grateful for every day. There are so many people who have known Larry longer and are closer to him than I could ever be. And so many people more worthy of writing about what Larry means to them. But I’m forever grateful that he’s been a part of my life, if only for the past 12 years.

When I would email him with complaints or frustrations about the struggles of journalism, he always had inspiring things to say. But one stuck out more than the others. So much so that I printed it out and kept it on a bulletin board above my desk for years — “If you find your way in wrestling, or journalism, or anywhere else that those interests lead you, that’s great. And the amazing fact is that is exactly what will happen for you. Probably not without a few tears or heartaches along the way, but it’s all part of the journey.”

As Larry faces more recent health issues, recently hospitalized and now rehabbing, there are more than a few tears and heartaches pouring out from all over the wrestling world. But like Larry said, it’s all part of the journey.