“Don’t ever put cake in front of a wrestler,” Pat Patterson admonished the organizers of the recent Hamilton Comic-Con event, who presented him, “Hacksaw” Jim Duggan, the One Man Gang, and a host of other WWE legends with a cake celebrating the 30th anniversary of the first ever Royal Rumble match, which took place in that same city a year before it became the namesake match of one of the company’s most popular annual pay-per-view events.

Patterson’s warning — and Duggan’s subsequent quip that Patterson should “take a closer look at it” — got the panel, which was free for attendees of the Comic-Con, to a raucous start. Though nobody ended up getting their face shoved in the cake, a standard trope of wrestling, the event was nonetheless a fun one full of laughs and memories. 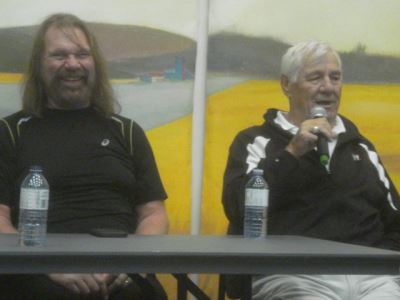 Particularly notable about the panel was that it included three of the key players in that event: Patterson, who came up with the idea; Duggan, who won the match; and Gang, who was the last man eliminated from the match.

“I was always trying to be creative,” Patterson said, about his inspiration for the concept of the Royal Rumble. “I was thinking ‘battle royal,’ somebody came up with that idea. So I started thinking what if we started off with two guys coming in, and then keep bringing guys in until they’re all thrown out. I thought it could work.”

“I had a meeting with Vince McMahon and I gave him the idea of what I wanted to do. He said, “Pat, leave it. It’s sh*t.” I explained it again, and he said, ‘Aw, please, that’s not going to work.’ So one night we had to put on a show here in Hamilton, and I suggested it again. ‘You and that goddamn Royal Rumble,’ he said. ‘Fine, go ahead, but you do it by yourself.’ So I did it by myself. And all the boys loved it, and the fans loved it.”

Duggan certainly did, noting that winning the inaugural Royal Rumble was one of the biggest highlights of his career.

“Later, they gave the winner a title shot at WrestleMania,” pointed out Patterson, prompting Duggan to pound the table in mock outrage. “That sure didn’t happen in ’88!”

The three of them then spilled some of the secrets about putting together the match, which was an interesting look at what goes on behind the curtain.

“You know, they say it was all a random draw,” pointed out Gang. “That’s all B.S. It was all planned out. You’d go and they’d give you your number, and then you’d go and work out how you want to dump guys out or whatever, and how long you’re in there.”

“People may think it was extremely complicated, with so many guys in the ring,” added Duggan. “Actually, I thought it was kind of easier. You knew who was going to go out before you, so when you see that he goes out, you find the guy who’s supposed to put you out and you go out. Even though it looked complicated, it was actually one of the easiest matches to do.”

Though, for Gang, he would have found it even easier if his time in the ring was shorter. 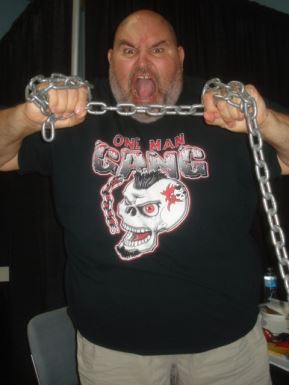 “I was a big guy, so I was hoping I wouldn’t be in there first, because those guys have to be in there for 15 or 20 minutes. I get in and I tried to hang out in the corner for a while or else I’d get blown up. I was hoping that I could go in there and then get dumped out right away.”

“Because the payday is the payday no matter what, you know? (It would be different) if you go in there first and stay to the end, and you get a bigger paycheque… but it didn’t work that way. If I’d gone in and they all ganged up on me and threw me right out, I’d have been as happy as you can be.”

Though, he did acknowledge that being in the ring with Duggan as the last two was a treat.

“People always ask me who my favourite opponent was, and I say it was Duggan. We always went out there and gave each other as good as we got. I’d say ‘Hit me!’ And he would, with those big ham-hock hands of his.”

Agreed Duggan, “I’ve had easier streetfights… and those were real!”

“They let us work out our own finish,” Gang remembered. “We worked it out that he’d pull the top rope down as I came charging in, and I’d take a spectacular roll out of the ring, and he’d be the big winner.”

“I think back, and if they’d have given you a title shot for winning, and they told me that I was the last one and had to put Duggan over, I’d have been like, ‘What, are you crazy? This is my big opportunity. I could just dump him out, and I’d tell everyone that he just slipped on the ropes or something,'” he said, drawing more laughs, including from Duggan.

“I’m just glad that everyone loved the match,” Patterson said to close the panel. “I was happy that the idea became so popular, and that still is the case today. Every year, people love the Royal Rumble. And it all started just down the road from here.”