No sooner did I finish my last writings when I had more than enough material to write another. Such is the unpredictability of life on the road. I believe I was in Saskatoon last time I wrote, so let’s pick up there, leaving for St. Albert on New Years Day.

Now, we have a five-hour drive ahead of us, and it’s always a challenge getting everyone on the same page. For a split second, I almost added the line “and I don’t know why that is” but, in fact, I DO know why that is. I do know why that is, and I can tell you exactly why, but it’s gonna come with one of those “back in the day” tags to go along with it. But it’s completely true. 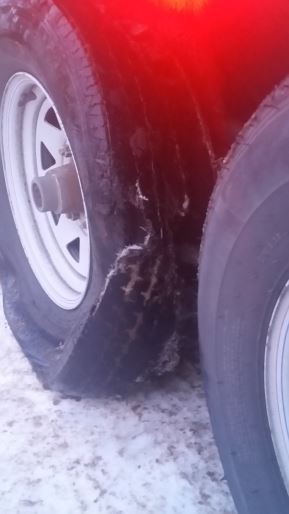 The flat tire on the ring truck.

Back in the day we were leaving at 11 a.m. sharp, or whatever time was decided, and if you weren’t there within a few minutes, my trainer would have told everyone to hop in and we would have driven off. That’s how you kept everything on track. In this business discipline is everything if you are to avoid catastrophe, because sooner or later, especially on a tour of this magnitude, it’s gonna come crashing down. So you’d better be prepared!

Long story short, we’re 95km from the venue in St. Albert and we blew a tire on the ring trailer. What to do?

We drove into the nearest little town and the guys start searching and calling for tire repair. But it’s New Years Day. It’s New Years Day, we’re 95km from the venue and it’s somewhere around 2:15 p.m. if I recall correctly. Time is NOT on our side. After 15 minutes of calls and searching, I simply said, “Guys, hop in, daylight is burning, we have NO CHOICE but to limp this thing into town, or this whole tour could be derailed.”

We ended up getting to the venue right on time, even though we kept our speed way down as we made our way into town. Crisis number two avoided. And, let the record show we had a complete sellout crowd in St. Albert. It was an unbelievable night.

After the show, we packed up, and headed out. The crew went off to Calgary for the night, while the ring truck and trailer stayed behind in Edmonton so we could get repairs done in the morning. I went my own way, because I had a hotel credit, and scored a plush room close to the afterparty sponsor we had lined up at a local restaurant. So, after dropping in to make an appearance at the restaurant, enjoying a diet Pepsi, and collecting my evening’s pay, I retreated to get some rest.

It’s 330 a.m. and I’m startled awake by a flashing strobe light, and the loud on and off piercing sounds of a fire alarm. Is this a dream? I sit up in bed having those bizarre thoughts that you have when you’re not fully awake. Is this my phone alarm, and if so, why is my phone waking up the entire hotel? Did I just trip a fire alarm in my sleep somehow? Is the building on fire and I actually need to go outside?

I move in slow motion as my foggy thoughts become clear. The alarm is still going off, so I slowly put clothes on and go in the hallway to see if the sound of the alarm can be heard out there — as if this monstrous alarm has been confined to my room only. At first I see nobody in the halls. But soon after I close the door I hear some light talking in the hallway. “Okay” I thought, “I’m packing everything up, as if I need to evacuate, but before I go outside I need to find out what’s going on.”

So I neatly pack everything up, and stack my stuff on the bed. I then put all my layers of clothes on, because if this is the real deal, I’m not standing in -15C (or whatever it was at the time) unprepared. I had kept looking outside the window as I was getting dressed, but saw no flames. However there were sirens growing close, so it’s a safe assumption that the fire dept was on its way. And, this was a pretty big hotel, so it could have easily been on fire and I wouldn’t have seem flames from my hotel window.

I start wandering the halls. I figured, if I caught a whiff of smoke in the air, I’m about-facing, grabbing my belongings, which were packed, and ready for me to grab, and I’m simply headed out the emergency exit which was just four or five doors down from me. This isn’t rocket science.

Down the halls I go, but no matter where I went, there wasn’t a hint of smoke in the air. Nor were there any hotel guests roaming the halls, aside from the one couple and their little one, who were walking out. The lady looked at me, almost embarrassingly and said “What are you gonna do?” I remember thinking, if you’ve got a little one, you get out of the building, no matter what, that’s what you do.

I thought for a moment I should go down to the lobby and see what’s up. But I didn’t. I figured elevators might be down, or may stop working if I get in one, and I was still half asleep, and, if I may be completely honest, feeling much too lazy to walk a simple flight of steps, because I wasn’t completely sold on the idea that I was in danger. Famous last thoughts, I know, but I’ll live my life how I see fit, just as you live yours.

So I headed back to my room, and aside from taking another quick walk down the halls 10 minutes after those alarms were finally turned off, I undressed and went back to sleep. 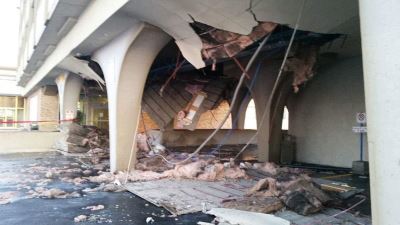 Ramada Inn in South Edmonton after the water main broke. This was the damage caused, although I didn’t hear one peep until the fire alarm sounded.

The next morning upon checking out I discovered what had happened. It turns out a water main had somehow broken and this all somehow caused a small section of the entrance carport area to collapse. (See the photo!)

That day, as we headed to Golden, BC, mid-way through the nearly six-hour drive, we were alerted that one of the wrestlers on the tour had up and left. He went home. Fair enough, I suppose. This isn’t for everyone. Unprofessional conduct for sure, but I’ll even let that slide with the thought that, if you felt that you were being treated unprofessionally, then I can see that.

But I draw the line at fabricating stories, especially when you’re taking the picture that I took with my own phone, and using it to try and help your cause so you don’t look bad. So Brian Logan, let me correct you for the record. None of the other boys stayed at that hotel. In fact, nobody knew where I was! Only that I said I’d meet the ring truck in the morning, which was to be fixed. I got that room for myself with a credit I had from hotels.com. None of the other guys stayed there, and therefore they were NOT all forced out of their rooms in the cold and so on. I didn’t even leave the second floor, or receive a call from the hotel office or anything, so… nice try, bud. 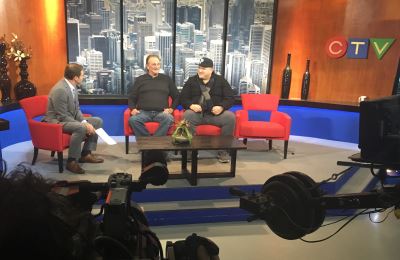 The next few days have whizzed by. It is now Saturday morning, Jan. 6th, 10:45 a.m. as I am writing. The tour has hit a smooth patch, but I understand KLD and Jake Roberts ended up going to the wrong TV station in Regina. Apparently, they were scheduled for Global TV and I sent them to CTV, which were the instructions I was given. They still got air time, but I understand Global wasn’t too happy.

I will tell you, it isn’t easy trying to keep this train on the tracks. Information is passed through sources and however it gets twisted around, it does, and these things happen.

That’s just one more reason why I want my hands in all aspects of this company. Not to take over. I don’t need to take over. But, it’s like a proofreader. I want to look for mistakes, and misinformation, so this operation can run smoother. With every tour I see little tweaks that can be made. All for the betterment of the company. 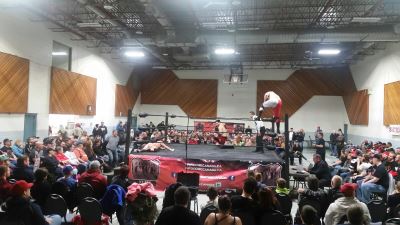 Record crowds in many markets. This is what Calgary looked like.

Today, we have a simple two-hour drive to Regina, SK. We’ve had record crowds in St. Albert, Golden, Calgary, and Medicine Hat. One sellout after another. Last night in Assiniboia, I expected a small crowd, as it is a much smaller town, but we ended up having quite the turnout, around 200, give or take. In the summer tour, we may have had 50, so… Even the small markets have been amazing!

That’s it for now, but this amazing adventure rolls on as we approach the halfway point!