TOKYO – New Year Dash featured Chris Jericho attacking Tetsuya Naito and daring fans to hit him. Many people thought that Jericho’s appearance at Wrestle Kingdom 12 would be a one-time match for New Japan. However, the wheels have now been set in motion for a Naito versus Jericho feud.

After I attended and enjoyed the Wrestle Kingdom 12 show, I knew I had to attend New Year Dash, even if it meant waking up early to wait in line all day.

New Year Dash tickets sold out months ago. However, New Japan Pro Wrestling releases tickets the day of the show so I woke up early at 8 a.m. in the morning and ran to Korakuen Hall to wait in line. I arrived and saw newspapers taped to the ground with a name, number of tickets, and “New Year Dash” written on it. 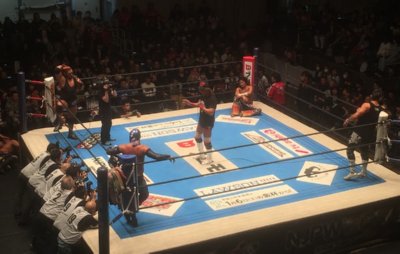 Tetsuya Naito in the centre of the ring. Photos by Don Davies

I was unprepared for this and was unsure of what to do next.

Thankfully a nice wrestling fan gave me supplies so that my name could join the line up of papers. So I wrote my name, the number of tickets that I wanted and “New Year Dash” on the paper. Since I thought this was all I had to do I started walking away from Korakuen Hall.

The same nice wrestling fan stopped me and asked if I had taped my name to the flight of stairs going up to Korakuen Hall to save my place in line when doors opened. I was very thankful that I was given this information since I missed some of the New Japan Rumble at Wrestle Kingdom 12 because there was such a long line up to get into the Tokyo Dome and there was a short time between when doors opened and the start of the Rumble.

This paper line up for tickets and doors was unlike anything that I had previously experienced. Fans from Europe, USA, and Australia expressed that this was also new to them. One fan from New York City said that the paper line up would never work in America because everyone would rip the paper up.

It was great talking with fans from around the world. I’ve always found wrestling fans to be incredibly friendly but these were the friendliest fans that I have met. We all shared similar stories of how we flew great distances for this show and how we were all a bit culture shocked from being in Japan. All this created a great bond.

After my name was taped to the ground outside the ticket kiosk and by the doors of Korakuen Hall I left the area to grab some much needed food.

Bullet club member Chase Owens and I grabbed a bite to eat. My audio recording device was rolling during our talk so check back for the upcoming article about our conversation.

After filling up on food with Owens, it was time to return to Korakuen Hall to wait for the ticket kiosk to open. Next to Korakuen Hall is a bookstore that featured lots of wrestling books and magazines. There were books about every era of wrestling with nice black and white photos from the 1950s to the current day New Japan product. I flipped through many books and magazines while keeping an eye out on the ticket kiosk.

Approximately 30 minutes before the kiosk opened there was a rush of wrestling fans who arrived at Korakuen Hall and had a look of dread in their eyes when they realized that the line up for tickets was snaking around the outside of the building. Since I was close to the front of the line, numerous people offered me a lot of money to get them a ticket.

The first match of the night featured the “Young Lions” Ren Narita, Shota Umino, Tetsuhiro Yagi, and Tomoyuki Oka, against the establish veterans of Manabu Nakanishi, Hiroyoshi Tenzan, Satoshi Kojima and Yuji Nagata. Fans were solidly behind young lions. However, when the veterans hit their signature moves and won the match, the crowd cheered loudly.

Korakuen Hall is a small venue with a low ceiling that allows sound to travel. As a result the crowd reaction sounds very loud. It is a very simple venue that doesn’t have an entrance ramp, which results in a lot less dead space and more room for people. The production value was very simple compared to Wrestle Kingdom 12.

As I was taking notes on the previous match a woman close to me yells and a guy screams “holy s**t!” I looked behind me to see Takashi Iizuka only a few feet away from me. He slowly walked by all the people on the balcony before making his way down to the ring for his tag match. There was lots of action outside the ring and fans loved it. The sound of the wrestlers hitting the guardrail echoed very loudly. El Desperado, Taichi, TAKA Michinoku, Takashi Iizuka, and Yoshinobu Kanemaru won against Henare, Hirai Kawato, Jushin Liger, Tiger Mask IV, and Togi Makabe

Jay White entered to his switchblade music, which sounded a bit awkward without a video screen. White looked good as a heel and was loudly booed when he did some underhanded moves such as kicking Katsuya Kitamura before the test of strength. White won over Kitamura.

Roppongi 3K and Cheeseburger got a great reaction to their entrance music with fans singing aloud. There were Cheeseburger chants when he entered the ring. Kenny Omega, Matt Jackson, and Nick Jackson got a loud reaction when they entered and the crowd erupted when they won. This was a great performance by everyone in the match.

Chase Owens, Cody Rhodes, Leo Tonga, Marty Scurll, and Yujiro Takahashi entered and the people on the balcony loudly yelled Chase Owens’ name repeatedly. Owens waved at the balcony, and then the fans yelled Scurll’s name repeatedly. Juice Robinson was the most over babyface in this match. When Scurll did the finger cracking move it was very loud and echoed. It was much louder than the Tokyo Dome finger cracking spot. David Finlay, Juice Robinson, Kota Ibushi, KUSHIDA, and Ryusuke Taguchi lost to Bullet Club. Post match involved Cody attacking Ibushi and Kenny Omega ran out to stop Cody, which was the second biggest pop of the night.

When Kenny grabbed the microphone you could hear a pin drop. Omega’s microphone was not working and the fans could hear Omega talking in the ring from the balcony.

They teased Jay White becoming a Bullet Club member when Omega presented White with a Bullet Club shirt. The crowd was into this but seemed to know that White would turn on Omega. After White hit the Switchblade the crowd was happy and people talked about the obvious future match between the two.

Next was Bad Luck Fale, Tama Tonga and Tonga Roa pinning Beretta, Tomohiro Ishii and Toru Yano. There were loud Toru Yano chants. This was a great solid match.

Davey Boy Smith, Jr., Lance Archer, Minoru Suzuki, and Zack Sabre, Jr. came out and Archer did his usual spiting water on the fans routine. He spewed water from his bottle and it almost hit the people on the balcony. When Minoru Suzuki revealed his shaved head the fans let out a collective “ohhhh.” Once the match started against Hiroshi Tanahashi, Michael Elgin, and War Machine (Hanson and Ray Rowe) fans got so quiet that I could hear Don Callis and Kevin Kelly on commentary across Korakuen Hall. The last 30 seconds of match were very fast and the fans were going crazy for The Killer Elite Squad winning. This was the most physical match of the night because there were big men in the ring throwing each other around.

Post match Suzuki laid out Tanahashi and worked on his knee and said “Suzuki-gun ichiban” which translates to “Suzuki-gun is number one.”

Los Ingobernables de Japon, BUSHI, EVIL, Hiromu Takahashi, SANADA, and Tetsuya Naito, all made their way to the ring slowly, with Naito appearing last. When Naito finally appeared it was one of the loudest reactions of the night. Gedo, Hirooki Goto, Kazuchika Okada, Will Ospreay, and Yoshi-Hashi entered next. There was a mixed reaction for Okada with most of the crowd cheering but some booing. The loudest reaction of the night came when Naito and Okada exchanged punches, and when Natio make a comeback against Yoshi-Hashi. Naito then pin Yoshi-Hashi for the win.

After Naito cut a promo, Chris Jericho ran to the ring to fight Naito. Jericho got pulled off and then told people to “Shut your f**king ass.” Chants of “F**k em up Jericho f**k em up” broke out to end the show.