What do you get when you assign a 13-year-old martial arts competitor to write about a rising wrestling star with a storied mixed-martial arts background? An interesting conversation between like-minded individuals for sure. Join us as Matthew McFarlin talks with Matt Riddle.

I have spent most of my life in martial arts. Starting at age 4, my parents let me start learning the skills I would need to become a Black Belt in Choi Kwang Do at age 6. That got me headlines as the “Filipino Phenom” in my mom’s hometown of Manila, Philippines. Fast forward to 2017 and I’m on the road to my 4th degree black belt, which I hope to get by the time I am 16 years old, and I’m pretty sure that would make me one of the youngest, highest ranked Black Belt Deputy Masters in the United States. 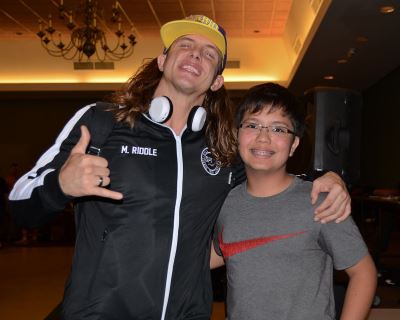 Because I like to try new things, I started Brazilian Jiu Jitsu this year too, and captured a second place medal at a recent tournament.

When it was announced that EVOLVE Wrestling was going to be running in nearby Livonia, Michigan, my dad, SLAM! Wrestling photographer Brad McFarlin, arranged for me to talk with Matt Riddle.

I’ve been a fan of the WWE forever. But I follow the other groups online and catch a lot of clips. One name that keeps coming up again and again is Matt Riddle — because he’s the real deal, and as far as I can see, is going to be the next big thing.

Matthew “Matt” Riddle was born January 14, 1986, in Allentown, Penn. He stands 6-foot-1, and around 220 pounds. He first made a name for himself by appearing on Spike TV’s The Ultimate Fighter 7. He went on a four fight win streak in the UFC and finished up his MMA career at 8-3 before retiring due to financial considerations. He began training for professional wrestling in late 2014 at the Monster Factory in Paulsboro, N.J. He had his first professional match on February 7, 2015. In April of this year, Riddle defeated five other men to become the inaugural WNN Champion. As an interesting sidenote, the recent PWI 500 listed him #116 of the top 500 wrestlers in the world.

Riddle now is hugely in demand, and is in Toronto today, Sunday, December 17, for Smash Wrestling. (Wish we could make that drive!) He’s one of the top guys in EVOLVE and I am looking forward to seeing his career progress.

Thanks to promoter Gabe Sapolsky and right-hand man Trevin Adams, the opportunity came for me to meet Matt post show in Livonia. Riddle came out of the dressing room and came right to us. He was already showered and wearing his sweats. He greeted my Dad and I as if we were old friends. I was nervous at first, because this was my first time doing an interview but my Dad had warned me previously to stay cool, and don’t mark out. Riddle located a small room offside of the hall and we all three stood while I ran my recorder. It went a lot easier then I thought. He’s got three kids of his own, and I can tell he’s a really nice guy.

Here’s our talk from September 22nd:

Q: How has your MMA training helped you to become a professional wrestler?

A: Well, you know I think any kind of training, be it any sport, MMA, or like baseball, football, you train at a certain level when you’re a professional athlete to get ready for certain things. I think MMA helped me out greatly just because pro wrestling’s a fight. You go in there, the bell rings, there’s one winner or a draw or whatever, but it’s still a fight — even if you’re a showman, you’re still fighting, you’re still competing against one another, trying to pin somebody, knock them out or submit them. So in the UFC, I mean you can’t pin anybody in the UFC, but you can knock them out or submit them, so I think that helped out. And with my style of professional wrestling being, I want people to, when I throw a strike, like a knee to the head or a kick to the head, I want them to see it and question, ‘Was that real? How’s that guy taking that? How’s he hitting people in the head with his shins and knees and not killing people.’ Making them believe. I think that’s what helped me, MMA going into professional wrestling, to make it look as real as possible but then adding the pro wrestling element, the stuntman element, to make it safe.

Q: I’m wondering if that will help or anything.

A: Yes, jiu-jitsu, not only does it help because you’ve now got multiple transition stuff that people don’t even understand. And I really think the way professional wrestling is going, the people are getting tired of the lock-up, headlock, takeover. While tonight I took Dickenson down with a rolling guillotine transition, and then I just sort of open palm striked him like we were in a Pancrease fight. I think that is the direction pro wrestling is going, more shoot style, jiu-jitsu, MMA, striking, into spots. Of course, you’re going to have your power bombs, tombstones, whatever, but there’s should still be an element of realism there. That’s where the jiu-jitsu comes in, because jiu-jitsu’s real. Muay Thai, real. Boxing, real. Not that there’s anything wrong with it, but World of Sport chain wrestling from the UK and stuff, it works, it’s professional wrestling, everything works, but at the same time look at the world of MMA out there and UFC and jiu-jitsu, the Abu Dhabi [Combat Club Submission Wrestling World Championship] and all these tournaments where you know the world-class grapplers, the best in the world. We try to suspend somebody’s belief and entertain them. It’s nice to have that element of real. So yeah, jiu-jitsu helps, all of it helps. Like I said, I think that’s where the future of the sport is going.

Q: Out of all the promotions and countries that you’ve been to, which is your favourite to work in?

A; You know, man, like, there’s different parts of the world that are very fun to work in. Like when you go to the UK and you’ve got places like Progress Wrestling, you’ve got Rev Pro. I love working with those places because it’s just like EVOLVE, Progress has a good relationship with the WWE, and have a connection, like I can wrestle strong style, stuff like that. I like wrestling for Rev Pro in the UK because then I get to work with the New Japan talent, Shibata and Ishii and Naito … I could go on. So I like working with those indies, but at the same time, EVOLVE is like my home. I’ve been here since Day 1. I’m the king … here, the WWN champion. So I really like EVOLVE; they’re the one that gave me my start and it’s the reason I’ve been able to do what I do. But if I was going to list every promotion, it would be PWG, EVOLVE, Progress, Rev Pro, OTT in Ireland, WXW in Germany, Beyond Wrestling in Boston. Each area has their own spots. Here in the the Detroit/Chicago area, I’ve never wrestled in Detroit other than for EVOLVE, but Chicago is AAW, and I wrestle there all the time and the crowd’s great and it’s awesome. So that would be my spot in the Midwest. Then my spot in California is PWG. My spot in the northeast is Boston would be Beyond, and then EVOLVE tours all over. And in the UK, I have my spots. I like wrestling everywhere, but there’s also good indies and bad indies, and fortunately for me, I wrestle for all the best indies in the world. And I’m in super high demand, so that’s good.

Q: Where do you see EVOLVE going in maybe the next year or so?

A: Honestly, I see EVOLVE really skyrocketing. You hear people say that because, ‘Oh I work for this company skyrocketing, blah blah blah,’ but I really think it’s going to. We had a deal with Flo Slam where we couldn’t work WWE anymore like we were before we had the deal with Flo Slam. Now that the deal with Flo Slam is probably coming to an end, because, you know, whatever it may be, financially, or the reason why they can’t continue, but it’s going to allow us to work with WWE again, hence Cedric Alexander was here. I think we’re in the right direction with that, just like Progress works with WWE, you’ve got British strong style; just like OTT works with them, because they’ve got Jordan Devlin and other guys that are also from the UK tournaments, stuff like that. Same thing with ICW in Scotland. All these little indy companies are working hand in hand with WWE, and when you’re part of that group, you know the fans come, they know what’s connected. Also, it’s still an indy product and if you know anything about the indies, it’s a little more rawer, it’s a little better, it’s a little more personal; this is not an arena with 15,000 people, you’re in an arena with 300 people and it’s very personal.

Q: What plans or goals do you have for yourself in the future?

A: Goals? You know, one I get to Japan sooner than later. That’s always a goal. I mesh very well with the Japanese and their shoot style, since I fought in the UFC and all that. Me mixing it up with them, it just seems to be a match made in heaven. I’ve already wrestled Shibata and Ishii. I don’t speak Japanese, they don’t really speak English, and we have really good wrestling matches, so I’m pretty sure if we got to talk a little more, work together a little more, we could really make some magic.

But honestly, just keep doing what I’m doing, keep getting better, keep building my name, keep having good matches, keep having super indy-riffic matches, because that’s the thing with me, I’m not like a one-trick pony. I just don’t want to be like, Oh, he’s a shooter’ or, ‘Oh, he does spots.’ I like to do everything. Like the other day I wrestled Mikey Whiplash in Scotland and we just shot on each other. There was really no crazy spots or moves whatever. Then two nights later, I’m no-selling Canadian Destroyers, penalty kicking people up and over, and doing all kinds of crazy stuff off the top rope and stuff. But I think there’s a time and place for each. The best way, just like the best way to get over, to be known, is to be everywhere and work all around the world at once, which is almost impossible, but I’m doing it.

And then on top of that is to work every style possible, be it strong style, be it lucha, be it more highspot indy. Whatever it is, work it. That’s about it.