At tonight’s ROH pay-per-view Final Battle, War Machine’s Hanson is ready for a hard-hitting and gruelling fight against The Addiction (Christopher Daniels and Frankie Kazarian), along with his partner Raymond Rowe. He promises “revenge” and “sheer violence out of me and Ray” in the grudge match.

“It was The Addiction that cheated us out of the Ring of Honor World tag team championships. We didn’t have a fair shot back at them. Most recently they cost us another tag title match against the Machine Guns (Alex Shelley and Chris Sabin). They (The Addiction) cut off a piece of my beard,” Hanson told SLAM! Wrestling while waiting for a flight connection to eventually get him to New York City for the show. 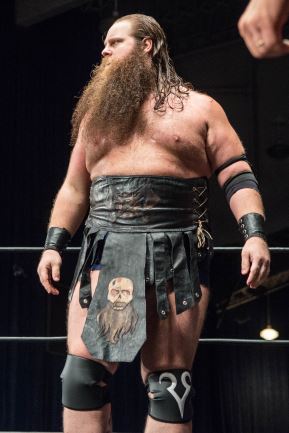 The beard represents a big transitional shift in Hanson’s career that started when he was on the shelf.

In late 2011 Hanson had major shoulder surgery to repair a severe labral tear, which is a tear of the cartilage in the shoulder joint. “I was told that I might not recover from it. I might not be able to wrestle again. That was a pretty rough year of my life,” admitted Hanson.

He transformed from Handsome Johnny into the big bearded Hanson.

“To this day I’ve never trimmed the beard as a reminder of that period in my life when I thought that I was down and out and that I wasn’t going to be able to come back,” recalled Hanson, a 16-year veteran. “Technically, the first time it was trimmed was when the The Addiction assaulted me and cut a piece of my beard off.”

The journey of 6-foot-3, 293-pound Hanson (Todd Smith) started in New England at Killer Kowalski’s wrestling school. Kowalski started wrestling in the late 1940s and worked in top promotions, NWA and AWA, from the 1950s to the 1970s. After his in-ring retirement he opened a wrestling school in the late 1970s. The alumni from the school spanned multiple generations and included Big John Studd, Mike “Makhan Singh” Shaw, Triple H, Chyna, Frankie Kazarian, and Perry Saturn.

Kowalski taught Hanson the fundamentals of wrestling and how to construct a believable match where everything looked real. Kowalski’s training coupled with several years on the independent wrestling scene led to Hanson’s big break at ROH.

“I did a try out for ROH at one of their tryout camps in 2013. The ROH officials suggested that I alter some things, my gear, and take my character in a different direction, which I did. I had a match with them almost six months later with all the changes and that ended up granting access to the top prospect tournament,” said the 33-year-old Hanson. “It wasn’t until I grew a beard and changed my whole appearance that things started to take off for me.” 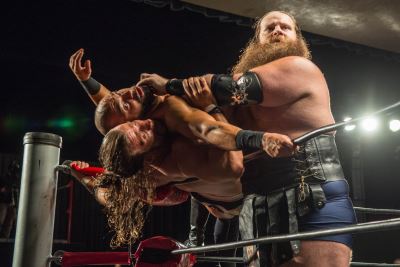 War Machine did such a great job in last year’s World Tag League that they were invited to be in this year’s tournament.

This year’s World Tag League featured very physical matches among War Machine, Killer Elite Squad, and Guerrillas of Destiny (GOD). “They are both big hard-hitting teams. Over here in the states, or UK and Mexico we wrestle a lot of smaller teams, and faster teams. So we go to Japan and get matched up with the Guerrillas of Destiny and the Killer Elite Squad. They are big monsters. It allows us to have a whole different dynamic in our matches than we have here in the states. So that’s a lot of fun for us. It’s fun wrestling guys who go at it just like us,” said Hanson.

Whether War Machine is in Japan or elsewhere they “want to be the best tag team in the world. World domination is our goal.” At tonight’s ROH pay-per-view Final Battle, War Machine will attempt to take one more step towards world domination when they bring the violence to The Addiction.