Kenny Omega got some measure of revenge at the Wrestle Kingdom press conference today. While Chris Jericho was being interviewed by the media Omega tackled Jericho to the ground and began raining punches down on him.

As handlers separated the two Jericho threw a table at Omega and laid in some haymakers.

“Come on, you son of a bitch!” yelled Jericho as the two were finally pulled apart.

“I will see you at the Tokyo Dome!” Omega shouted back.

At the press conference, both Omega and Jericho had a lot to say about Jericho’s bloody attack on Omega yesterday and their upcoming match at Wrestle Kingdom. 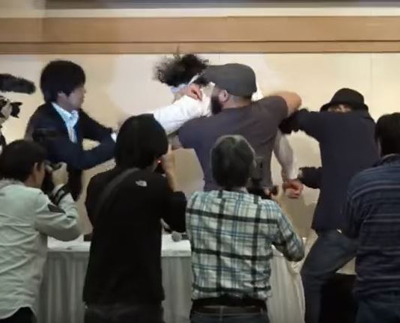 “This has now become a personal battle. So Chris, being your best and next time, yes, I can promise you, you aren’t going to get a chance to attack me from behind. You are going to see me coming head-on,” Omega warned as he sat with a bandage around his forehead and the IWGP United States Heavyweight Championship belt.

Omega went on to say he had always looked up to Jericho and that the assault yesterday taught him a lesson.

“As professional wrestlers we are performers, we are artists and sometimes we get caught up too much in the entertainment of the fans. Someone like me gets too caught up in five-star matches, six-star matches, best bouts, being the MVP. You reminded me yesterday, Chris Jericho, that at its core professional wrestling is a fight. I understand now what I must do,” said Omega.

Omega stated that Jericho attacking him from behind while a video was playing was something you would see on Monday Night Raw.

“Chris, you are officially smarter than me. I never saw it coming but don’t count me out, Chris, because I have a few surprises of my own. At the Dome, I am going to show you,” Omega vowed.

During his interview, Jericho claimed he was “happy” to have bloodied Omega.

“With last night, you saw what my thoughts are with Kenny Omega lying in a pool of his own blood. It made me happy and it made me understand just exactly how much better I am than Kenny Omega and now Japan will understand this as well,” he said.