No confusion — the Killer Bees were great

For many, WWE’s tag team division hit its peak in the 1980s, in terms of both prominence of the division and the depth of the roster of teams. The Killer Bees — B. Brian Blair and Jumping Jim Brunzell — were a key ingredient of that success, though their contributions are often overlooked. Perhaps it’s because they were never given a run as tag team champions. Perhaps it’s because of the anti-climactic way in which the team broke up. Perhaps it’s because after they split, neither was given an opportunity to shine in a singles capacity. Those looking for the answer may forever be in a state of Masked Confusion.

Masked Confusion, of course, was the name of the tactic used by the Bees whereby they would don masks mid-way through their match, and given their similar body types, would be able to switch in and out without their opponents, or the referee, knowing. Though technically they would cheat by switching without tagging in and out, because they only used this after multiple instances of their villainous opponents breaking the rules, the fans never saw this as giving the Bees an unfair edge, but rather a way to even up the odds that were stacked against them.

In some cases, the odds seemed to be stacked up against them backstage as well. 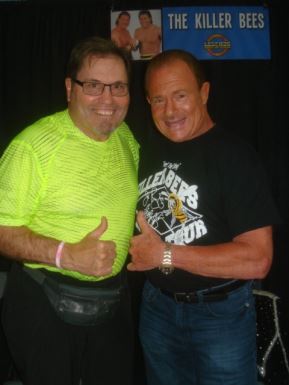 Jim Brunzell and Brian Blair at the Hamilton Comic-Con in October 2017. Photo by Bob Kapur

“We were promised the tag team championships three different times,” Blair told SLAM! Wrestling during an exclusive interview at the Hamilton Comic-Con in October 2017. “(The fact that we never got them) is actually why I left. Vince (McMahon) never gave us the belts. He’d always tell us, ‘The money’s in the chase. It’s better when the heels have the belts, but you’re going to get them, don’t worry.’ But then they just started bringing more and more teams in, and we never got them. I don’t know why.” His voice trailing, he seemed to speculate on a possible theory, “One time Jimmy [Brunzell] and Jesse [Ventura] were going to start a union.”

Tagging in, Brunzell outlined the rationale behind that attempt.

“During this time, Vince McMahon and the WWF were making an unbelievable amount of money. But there was no real issuance of how much money they made. So we had no idea what we were getting paid on. When Brian and I first started, we were making almost $5,000 a week. As we progressed and became more popular, it was down to less than $4,000 a week. And you could never figure out the percentage. In wrestling, there’s no insurance, no health insurance, we’re independent contractors. You had to pay for your own health insurance. I was paying $1,000 a month, and it didn’t cover me if I got hurt wrestling. So that was some of the things we brought up. Of course, Vince (didn’t) want to do that, because it would have cut some of his profits out.”

Today’s wrestlers, they both agreed, don’t have such issues, or at least not to the same degree.

“They’re paying the boys much better now,” Brunzell explained. “Probably the least amount a guy is going to make is 90 to 120 grand. And the top guys are making 2, 3, 4 million, with middle guys making 500 to 900 thousand. So they’re making a good living, and they’re not working nearly as much as we did.”

“We were on the road 27 days a month,” Blair interjected. “We flew every single day. One time, we wrestled 67 days in a row. Straight. In three different countries, so many different states.”

“That takes a toll on your body, on your family life,” Brunzell added.

“That aspect was harder for Jimmy,” Blair clarified, “because he had small children. I was footloose and fancy-free, I could do whatever I wanted. But to see Jimmy be away from his wife and kids, I could see how much it hurt him, I could feel his pain just thinking about it.”

For Blair, the toll was primarily physical, noting that during his career, he’s had a litany of injuries.

“300 stitches in (one) hand,” he said, listing off the main ones. “They zippered up my neck. Four operations. Four concussions.”

The issue of concussions is one on which Brunzell is particularly involved, including being one of the participants in a class action lawsuit against WWE for damages resulting from neurological injuries suffered from years in wrestling.

“You’ve got to stand up for yourself,” said Brunzell about the case. “There was a lot of times that we saw guys wrestle hurt every night, guys that were under the influence of drugs and alcohol. I had a concussion, and wrestled four straight days afterward. Finally the doctor in L.A. told me that he couldn’t let me wrestle because I had a third degree concussion. I just feel that a lot of guys are coming down with CTE, and a lot of fellows that died early, and some had Alzheimer’s disease.” Brunzell has willed his brain to Dr. Bennet Omalu, whose research studied the affects of concussions on NFL players, and is the subject of the Will Smith movie Concussion. “(Our lawsuit is being handled by) the same law firm that did the lawsuit against the NFL and got three and a half billion dollars.

For his part, Blair has stayed out of the lawsuit, as he is reluctant to cross WWE given the company’s support for the Cauliflower Alley Club, the non-profit fraternal organization that celebrates the history of the sport, of which he’s the President.

“I work with Vince through the CAC,” he explained. “Even though I am a victim of concussions, because the Cauliflower Alley Club is such a passion of mine, I don’t want to do anything to rock the relationship.”

Though the two don’t necessarily share the same view about that particular issue, it’s clear the two are still in sync about a great many other things.

About why Masked Confusion has never really been used since by other teams, despite how “over” it was at the time. Brunzell: “It was so popular, if someone else did it, people would say it’s a knockoff.” Blair: “They’d just say, ‘Oh, they’re just trying to replicate the Killer Bees.'”

About the quality of matches they had during their run. Brunzell: “We had some of the most classic matches of that time. Blair: “If you read Bret Hart’s book, he says that the best tag match he ever had was with Jimmy and I, on Saturday Night’s Main Event in L.A. Which was one of the highest rated segments ever in the history of that time slot during that period.”

And about their new Killer Bees comic book. Blair: “We’re really excited about it. The comics are the stories of our lives growing up and how we evolved into wrestling.” Brunzell: “The artwork and the storylines are great. Anything that can keep you relevant to fans who remember us or newer fans that never saw us, that’s a good feather in the cap.”

And, ultimately, over their overall time in the industry. Though both acknowledge the challenges, they are both thankful about a great many aspects of their careers and their lives in the business.

“I regret that we didn’t get the belts, and that we were lied to about that,” said Blair. “And that we weren’t paid according to an accounting system. There’s regrets like that. But in terms of camaraderie, the working, the lifestyle… no, no regrets. More importantly, I’m grateful to be involved with the CAC. It’s really a wonderful organization, and celebrates the people who made the business and were involved in it and gave so much of themselves for it. I encourage every fan to join the CAC and come to our annual reunion event.”

“The only thing I would have done differently,” mulled Brunzell, “is that I would have quit earlier, because that would have given me the opportunity to get a better job. I owe a lot of credit to Mary, my wife of 42 years. Our kids turned out incredibly. They’ve both got degrees, they both have great jobs. That’s a real proud accomplishment. I’ve actually written a book about my life as well — Matlands which is a compilation of stories from my career and my life.”

“Overall,” summed up Brunzell, “Brian and I have been very blessed to survive an industry that is very hard on the individuals in it.”

On that point, there is no confusion.