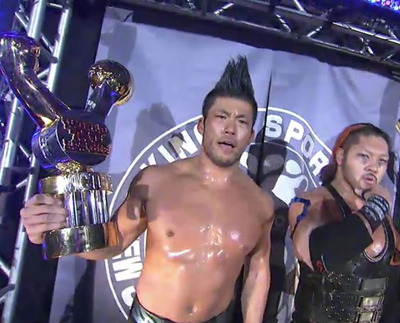 A Block divisions winners Evil and Sanada defeated B Block division winners Bullet Club’s Tama Tonga and Tanga Loa in a match with more shenanigans than a House of Commons session on Parliament Hill.

Things broke down when Tama Tonga pulled referee Red Shoes in the way of a clothesline from Evil. While Red Shoes lay hurt outside the ring Tanga Loa struck Evil with a chair across the back and then laid into Sanada too. As Loa set up a table on the floor Tanga beat Sanada with the chair in the ring.

Bushi can down to assist his Los Ingobernables pals as The Guerrillas prepared to slam Evil through the table. Bushi blinded both Guerrillas with his mist before Bullet Club’s Bad Luck Fale chased him all the way back to the dressing room. The Guerrillas grabbed some water from commentator Kevin Kelly to wash Bushi’s mist out of their eyes.

In the closing moments of the match, Evil and Sanada gave Loa a Magic Killer through the table and hit another Magic Killer on Tama but he kicked out. Tama stayed down though when Evil poleaxed him with Everything Is Evil.

While Evil and Sanada celebrated with their trophies Killer Elite Squad came out to show off their title belts.