In today’s vernacular “spilling the tea” refers to the act of gossiping, dishing the dirt or in pro wrestling speak, “shooting.” For the last 10 years, Sean Oliver has taken tea spillage to the next level: as the co-founder, President and frequent program host for Kayfabe Commentaries, he has unabashedly kicked over the tea pot. And he’s giving readers a delicious sip with his first book, Kayfabe Stories You’re Not Supposed to Hear From A Pro Wrestling Production Company Owner.

According to Oliver, Kayfabe Commentaries, which produces shoot interviews featuring pro wrestlers and key figures in the industry, was created as a means of “finding the ways to get the participants in the most guarded business in the world to open up to a complete stranger.” Originally producing and selling MP3 interview recordings, the business has evolved to DVD and On Demand interview productions and sales. Guests have made candid confessions and shared their perspectives in the company’s many series including: Breaking Kayfabe, You Shoot, Guest Booker, Back to the Territories and Timeline.

After a different book project fell through, Oliver decided he had plenty of his own stories to share after a decade of dealing with talent and living through the highs and lows of having your own business.

“It just kind of came to me,” revealed Oliver (no relation to SLAM! Wrestling Producer Greg Oliver) in a phone interview with SLAM! Wrestling from his New Jersey home. “At one point I said to myself the best story I have to tell right now, the most intriguing, funny, captivating and emotional at times story is the stuff we see in this company.” 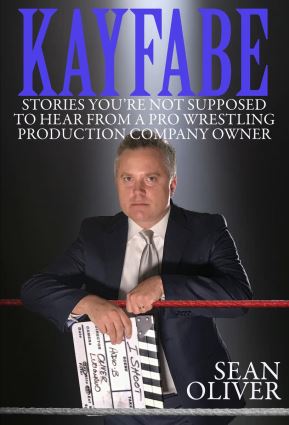 After banging out an outline and finishing a third draft in two months, Oliver, who also has an extensive acting, directing and voice acting background, was able to add author to his resume.

“My recall is still pretty good,” joked the 45-year-old Oliver. “I can remember the stories. The important thing for me though was I wanted to make sure this is being told with sufficient detail, almost like a piece of narrative fiction. I wanted the readers to read it like they were experiencing it in real time with me. (For example) I wanted them to get a real sense of who Terry Funk was. I wanted them to feel like they were sitting there listening to him say this stuff as they were reading it.”

But just a warning, while Kayfabe Commentaries has featured revered pro wrestling names such as Bruno Sammartino and the late Rowdy Roddy Piper, both the programming and the book are meant for mature audiences. Readers are in for a shock if this is their introduction to Oliver. This is not your Daddy’s wrestling book.

Oliver has a “no-holds barred” policy when it comes to sharing his experiences and his opinions. And while he is a wrestling fan, he is also a business man. He expects a lot out of the talent who agree to participate in a production.

“I am very conscious of the fact that when I sit there with somebody that my job is to be the viewer,” expressed Oliver. “And that being said, I am the viewer’s representative as I sit on that chair next to that person. I have to draw from them everything I can for a complete and compelling interview. So I take it very seriously that fans want information.”

In certain sections of the book, Oliver can come off as crude and as someone prone to the shock jock personality and antics similar to radio host, Howard Stern. This is the same guy after all who has had wrestlers on the You Shoot show participate in such games as The Ho Bag and What a Dick. (When asked if he is ever embarrassed by any questions he has asked on the show, Oliver quickly answered, “When you watch me, do I look like I am embarrassed?” To which this writer had to admit that he doesn’t. “Then that’s your answer,” Oliver concluded.)

Oliver does not hide nor sugarcoat his disappointment while recalling the filming of an interview with the late Chyna. At the time Chyna had just signed with Vivid Entertainment, a pornographic production company, and she arrived to the interview under-dressed and was unengaging for the entire shoot. The interview was a struggle for Oliver. He writes, “I hoped she f—ed better than she interviewed or else Vivid Video had just made the same mistake I did.”

But the dichotomy of Oliver is that the shock always gives way to his love of pro wrestling. In the next paragraph, his perspective shifts from Stern to Dr. Phil. I was instantly reminded of The Jerry Springer Show. Despite the shenanigans of each episode of his talk show, Springer always spent the last few moments giving his final thought on what had just transpired, ending on a heartfelt note. Oliver refers to the experience with Chyna as tragic and he’s saddened that she truly felt doing pornography would make her life better and solve her existing issues. Oliver writes that he knew the outcome for Chyna would not be a happy one. He was right. Chyna died of an overdose in 2016.

If readers can handle Oliver’s approach, they are in for the ultimate backstage pass into the world of pro wrestling that has equal doses of humour to mix with the salacious ingredients. (Just a note: readers will never again be able to look at the Iron Sheik without thinking of Oliver’s story of him having to use the bathroom badly during a traffic jam or the chaos that ensued when Kayfabe Commentaries chose him as the recipient of its first roast production.)

What readers might not expect is that Oliver pulls back the curtain on running his own business which proves to be just as interesting as the stories about wrestlers.

“It’s madness!” declared Oliver. “The shooting happens sporadically. We’ll be contacted by an agent or promoter that is going to have somebody in that we might be interested in and then it largely goes along with their (the talent’s) schedule. Sometimes we shoot late, sometimes we shoot early.”

Complicating things further is the fact that Kayfabe Commentaries does not have its own studio. While this allows flexibility to go to the talent rather than having the talent come to them, it means that all the equipment is taken on the road resulting in constant production set up and breakdown. And with money being the bottom line, everything has to “be best for business” thus lackluster sales can mean the end of a series despite good intentions and countless hours of hard work and creativity.

“I know a couple years prior we did about 18-20 full length (productions),” shared Oliver while discussing the company’s schedule. “That may not sound like a lot, but when you consider that we write it, shoot it, edit it, package it, market it, all the design work, the advertising and then we are off to the next one. I take a breath when one comes out. Okay got to get the next one ready three weeks from now. It’s a grind sometimes.”

For Oliver the end goal is to never have a product that works (deceives) the fans or doesn’t entertain them. And while he would like to write another book in the future, he confessed jokingly, “I need at least a week off after I finish this!”

Oliver is currently finishing up the recording of the book’s audio version, which as a bonus he promises will see him impersonating the wrestlers he writes about in the book.