The voice that gave us “Hel-l-lo, wrestling fans” has been silenced. Kansas City announcer Bill Kersten died on October 20 in hospice care of natural causes.

The catchphrase lived on. In a 1979 article from a Kansas City newspaper, columnist Alan Hoskins wrote that “there’s seldom a day when Kersten is not greeted by the familiar refrain.”

“I guess I’m recognized practically every day, in shopping centers, movies, and so on,” said Kersten. “I guess that’s a sign of success. We’ve been on TV for 15 years every week, the longest running local TV show in Kansas City history.” 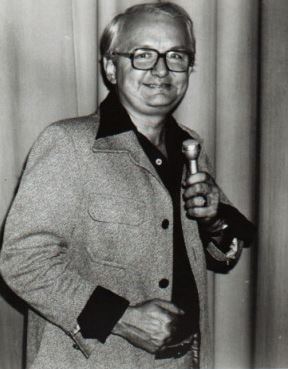 Bill Kersten in his heyday.

Decades later, beginning in 1988, a somewhat retired Kersten worked as a ticket taker at a movie theater in Liberty, Missouri, and fans would still yell “Hel-l-lo, wrestling fans.”

But Kertsen was far more than just a famous voice.

He was the mayor of Liberty, Missouri, for a time in the 1990s. He was a long-time employee of the Kansas City Power & Light. He hosted a radio show, Circle of Friends, into his 80s. He was a wonderful storyteller.

Kersten was born and raised in Kansas City, Kansas.

His father was a wrestling fan, and young Bill got a job as an usher at Memorial Hall while a freshman at Bishop Ward in 1947. While he spent a couple of years in the military, he was with the wrestling promotion pretty well until it folded, as promoter Bob Geigel sold out to Jim Crockett Jr.

Kersten took over as ring announcer in 1956, following in the footsteps of Bill Grigsby and Owen Bush. He was a constant presence on the shows from then on, opening the show, interviewing wrestlers, acting as timekeeper, and sometimes getting into the action himself — more than just being spit on by Bulldog Bob Brown too.

During one angle, Kersten found himself on the receiving end of an attack by Black Angus Campbell. “An amazingly strong man. He was nobody to mess with. He picked me up by the head without any bracing or anything, and then slammed me. I was sore for three months,” Kersten recalled in The Pro Wrestling Hall of Fame: The Heels. That resulted in a bout with Kersten teaming with Bob Geigel against Black Angus and his manager Percival Al Friend.

He made many friends over the years in wrestling. Kersten knew Harley Race before Race even got into pro wrestling. Kersten was at ringside, beaming with pride, when Race beat Dory Funk Jr. for the NWA World title. “I did the announcing for it. What a message that was … it probably put Harley Race on the map as much as anything.” 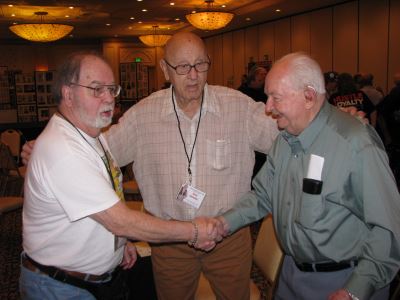 Kersten and Geigel were buddies too, and years later, would attend Cauliflower Alley Club reunions in Las Vegas together.

Geigel shared a Kersten story at the CAC in 2007. It was in Kansas City, and Geigel and Race convince convinced a girl to be a streaker for $10 and two free tickets to the wrestling show. “We got the streaker in Memorial Hall. Bill Kersten, who’s sitting right here, was our ring announcer. But we knew we had to do something to get the people’s attention away from the ring and going across the stage. So we told Bill, ‘Just as soon as you say, “Good evening ladies and gentlemen, the main event of the evening is…” and then look towards the stage and say, “What is that?” If you do that, everybody in the house will look at the stage’ and that’s where the streaker was going to be.” Geigel was at one end of the stage, and Race at the other. “I gave her a push, and she was hopping across the stage like this, and it brought down the house. It made the Kansas City paper the next day and it was a successful. It really got people talking about wrestling again.”

Kersten had a thousand stories. How about Dick Murdoch and Dusty Rhodes? “I have so many stories about them. Not too much in the ring, but outside the ring … they used to throw cherry bombs outside the hotel window and scare the heck out of people. Then they found a farmer with a goat, and they put the goat into the turnstile area of the Murlock Hotel and just let the goat run, and they took off.”

Another memorable moment came courtesy Rufus R. Jones (the “R” stood for “guts”). Kersten drove Jones to the TV station where Jones was promoting the upcoming matches during commercial breaks of a movie. Kersten watched as the TV announcer challenged Jones and wrestling’s believability. “We start talking about the match that night, Rufus wrestling whomever it was. All of a sudden, the TV announcer says, ‘Rufus, I don’t believe you have a head like you say you have.’ Rufus looked at me. Rufus went over and picked him up. Pow! He was out cold. The interview then went right back to the movie. But it took us a good four minutes to wake the guy up. What else could he do? He challenged him on live TV.”

Or a great brawl. “Probably one of the greatest that I remember is Mike DiBiase and Bob Orton at Kansas City, Kansas, Memorial Hall … they went up into the third balcony!” 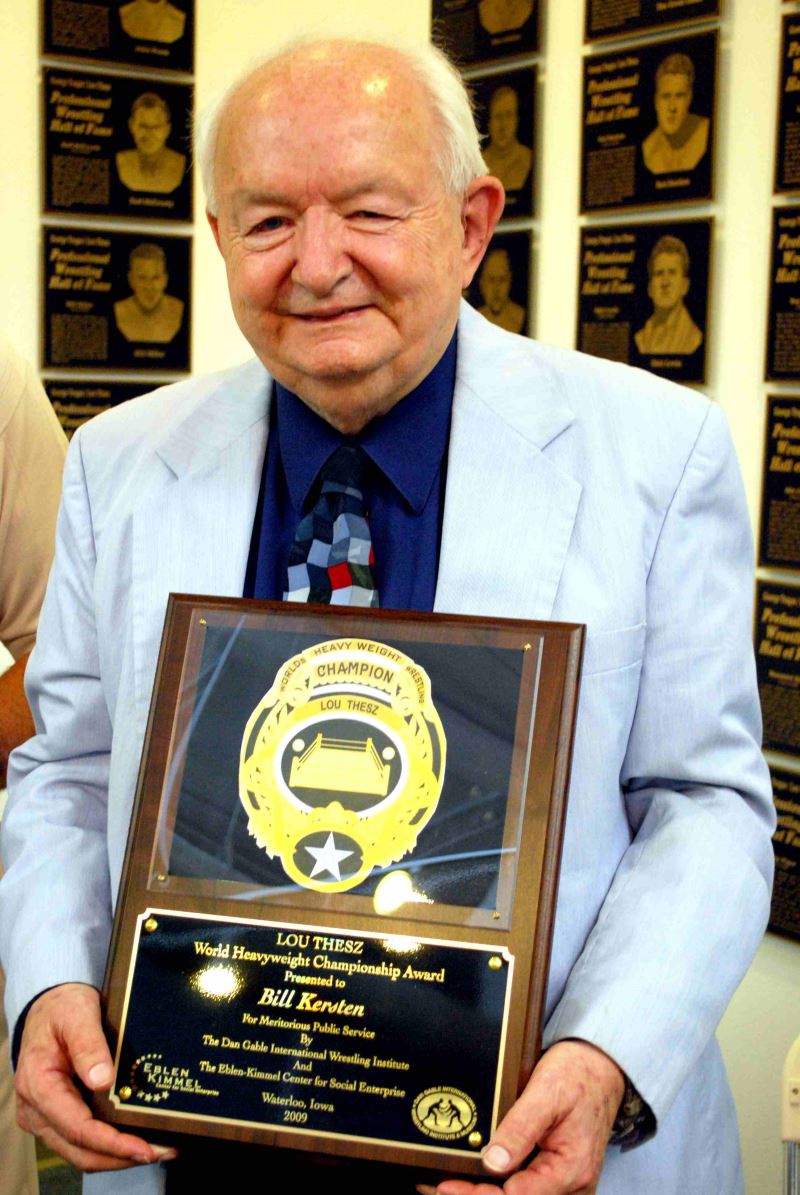 Bill Kersten with his Lou Thesz Award in 2009. Photo by Joyce Paustian

In 2009, Kersten was presented with the Lou Thesz Award by the National Wrestling Hall of Fame in Waterloo, Iowa, for his contributions to his community and charitable works. The Cauliflower Alley Club also honoured Kersten with a surprise award in 2009. He was brought to the stage by eight-time NWA World champion Harley Race, who owned a share of the Kansas City promotion.

The key to his success, he said, was his “enthusiasm as an announcer.”

Further details on Kersten’s death are not yet known. He had been in hospice care, and was into his 90s. Funeral details will follow.

Greg Oliver was pleased to be counted as one of Bill Kersten’s “Circle of Friends.” Greg can be emailed at [email protected], and you can follow him on Twitter @gregmep.