As a millennial, it’s very annoying explaining technology to my older friends and family. They don’t get it and always say, “Man, has the world ever changed.” However, as I watched WWE Monday Night Raw a few weeks ago, specifically the promo between John Cena and Roman Reigns ahead of their match at No Mercy, I thought to my self, “Boy, has the pro wrestling world ever changed.”

What has the sports entertainment world come to? The top performer of this generation deliberately called out the fans for booing him because “they want me to turn heel.”

As a fan, it definitely makes the product a lot more interesting. My attention was completely on my TV set as Cena reminded Reigns “it’s called a promo, if you wanna be the big dog you gotta learn how to do it.” 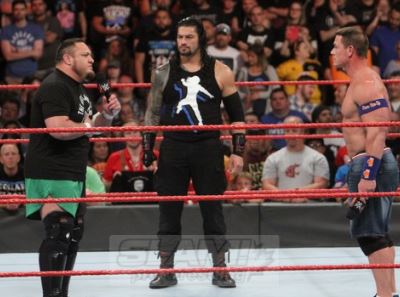 Samoa Joe addresses Roman Reigns and John Cena at the Monday Night Raw after SummerSlam, the beginning for the build towards Reigns versus Cena. Photo by George Tahinos

It’s almost an alternative — more accepting — type of kayfabe. The fact that the two biggest superstars in the WWE today sold their match at No Mercy by deliberately breaking the fourth wall and delivering very real insults made me invest in every second of air time they received, and I’d like more of that.

According to former WWE star, Al Snow, North Americans have known wrestling was scripted since the 1930s. So how did it explode into mainstream stardom in the ’90s when the very real boxing was an alternative?

By making the fans invest in fights, despite them knowing they were fake through captivating stories. To this day, that remains the recipe for cooking up successful wrestling shows, despite the world knowing they are pre-determined. Old school promoters never disrespected their fans, that’s why you’d never see a heel and a face wrestler together because they wanted to respect their fans and protect the business by not rubbing it in their faces that it was a work.

However, the wrestling landscape has now changed so much. Though we’ve always known it was scripted and embraced the fact that the men and women who enter the ring are risking their lives to tell us stories, we now know — or at least think we know — more about the business than ever. This has resulted in fans butting heads against WWE creative multiple times and criticizing them like we would to a hockey team making a bad trade.

We know when there’s a push coming for a certain guy, or when we’re tired of seeing the same character on our screens for years. I don’t think that’s something that happened back in the day.

For example, before the golden age of social media, I don’t recall fans booing babyfaces because they were getting pushed to the moon. Nobody questioned, “oh why are THEY giving him the opportunity?” It was more of the belief that the superstar legitimately won the match.

Fans now refer to the kayfabe you see in wrestling straight to the writers, producers, executives, rather than believe the story that WWE’s top performer is a legitimate threat. The long-known fact that wrestling is pre-determined and opportunities are given by a team of writers rather than wrestlers actually winning contests have now become a part of the story, ergo almost changing the definition of kayfabe.

Fans now believe certain wrestlers who don’t get an opportunity are being held back, whereas before the mindset as to why a particular performer wasn’t being featured on shows as much, or constantly putting others over, was because everyone just thought he couldn’t keep up with the top superstars.

This isn’t the first time we’ve seen this in the WWE either. During the AJ Styles-John Cena feud Styles mentioned that Cena has a notorious reputation of “burying” talent. This was one of the first times I remember seeing the WWE directly take something fans have been saying on the Internet Wrestling Community (IWC) and apply it to their programming. I also remember a time when The New Day were still heels and were letting the Nashville crowd know how much they hated country music. Kofi Kingston made it clear that “this isn’t my character saying this, but country music sucks!”

The English language has evolved so much, and some words have taken on new meaning, including kayfabe. Traditionally the word referred to the events in the wrestling world as legitimate but now includes using insider terms as a way to promote the story, which in a way, is legitimate. Today’s kayfabe includes the well-known fact that wrestling is fake, pre-determined, scripted, a work, or whatever you want to call it, and it’s changed the landscape of the entire industry.

It also has a little something to do with the fact that babyface and heel roles are kind of diminishing. Though the “heel” will still act cowardly and cheat to win, fans still cheer for the people who they think are cool, despite them being total jerks on screen. Usually, in television shows that makes the antagonist despicable.

Nowadays, fans really just cheer for who they like, regardless of if they’re bad or not. It has very much a UFC type of feel to it, where guys like Conor McGregor, who comes off as a natural heel, is adored by thousands of fans around the world. The same can be said about Kevin Owens, Adam Cole, Alexa Bliss, and many other heels who fans love to cheer.

With the recent boom of podcasts, fans now have the chance to get to know the person behind the character rather than just the performer they see on TV. Some may believe that’s a bad thing, though it does have its positives as well.

Chris Jericho remembered back to the year 2008 where he was one of — if not the — most hated guy in the business. On a podcast he stated that he didn’t even sign autographs or take pictures with fans because he wanted every single person who would come to the show to boo him, and that if even one person said, “well he’s actually a nice guy, you know?” to their neighbour then the act would be dead.

It shows you how the times have changed even from nine years ago.

Though heels in the business desperately try to get booed, it’s become an art form of how to really get heat. Not many heels can get a crowd to boo them as much as they’d like. I don’t know how much of it has to do with the fact that heels are open to taking pictures with fans and signing autographs and if that hurts their ability to get booed.

I think down the road the “breaking the fourth wall” type of moments will become the norm, but right now, especially in WWE, they keep them for very special moments. And it works. There is a reason “pipe bomb” has become a term that every wrestling fan knows and can trace back to one particular moment in wrestling history, and there is a reason the Cena-Reigns promo will always live on. It’s raised the bar on what a good promo is, and ultimately changed the definition of kayfabe as we know it.