BUFFALO, NY – A bird of prey, a bulldog and a cat dominate my memories of Ring of Honor’s Global Wars tour stop in Buffalo, New York. This show featured many of the stars of New Japan Pro Wrestling and the mix of Canadian, American, European and Japanese athletes made for an eclectic and physically appealing event. 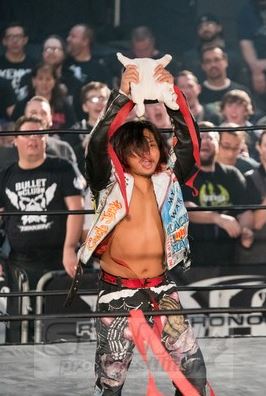 It’s not quite true to say that Hiromu Takahashi’s stuffed cat, Darryl, was the star of the show, but it wouldn’t be far off! Photos by Joe Hrycych, www.hrycychphotography.com.

For the first time in my life I witnessed a stuffed cat receive copious attention from a wrestling crowd. Hiromu Takahashi of NJPW comes to the ring with his mascot, a large stuffy cat, named Daryl. Throughout Takahashi’s match with Christopher Daniels the crowd chanted for Daryl over and over again. When Daryl was in peril because of a Daniels attack the crowd roared in anger at the veteran grappler. I could not get over the emotional attachment that the crowd had for the toy. Strangely, the cat enhanced the match which was won by Takahashi.

Keeping with the animal theme, another impressive bout featured Davey Boy Smith Jr., or as I call him “Little Bulldog,” Lance Archer and MMA legend Minoru Suzuki take on Mark Briscoe and War Machine. The crowd gasped at the size of Smith and Archer. Their presence let you know that they are big time fighters. It was Suzuki’s confidence that attracted my attention. From the way he carried himself in the ring you knew that he was the big dog and could easily clean the floor with any of these men whenever he wanted to. 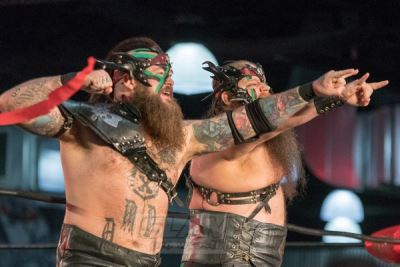 The match was a massive brawl that featured the nimble, but yet forceful attack of War Machine. I was stunned by the raw power I was witnessing in the slug fest around the ring. Then I saw something more remarkable that I had only seen in Japanese wrestling videos and that is fans standing on their seats. How often in wrestling have you heard wrestlers say that they had the crowd on their feet? These three men had people standing on their chairs! The match was won by Suzuki, Smith and Archer. 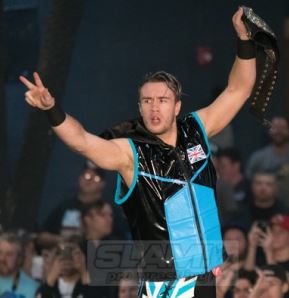 The highlight of the night at the standing room only packed crowd at the Buffalo Riverworks was Will Ospreay against Punishment Martinez. British grappler Ospreay stunned the crowd with his bird of prey-like aerial assault. Martinez hustled throughout this match and work strong and often caught Ospreay with high impact power moves. The most impressive cut off by Martinez came when Ospreay flew through the ropes and Martinez caught him by the throat. Soon Ospreay found himself in a power bomb that resulted in him being smashed on the edge of the canvas. Martinez pulled out the win which shocked the crowd.

I was able to catch up with “wrestling’s last real man” Silas Young who was not wrestling that night. He wanted to talk about his upcoming match at ROH’s PPV in Chicago this Sunday. Silas and his partner the Beer City Bruiser will be taking on best friends Chuckie T and New Japan star Baretta.

With a sneer Young stared at me indignantly at the mention of his opponents. “We don’t care if you’re best friends or brothers. Me and the Beer City Bruiser will show you why they call us real men,” said Young. 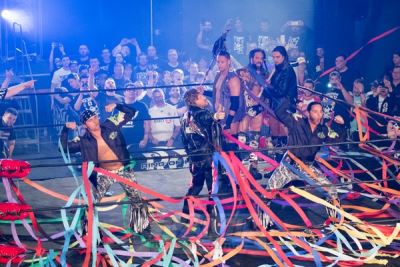 Spot Bullet Club in the streamers!

Ring of Honor’s event had many amazing matches but I was incredibly disappointed by the main event of The Kingdom against Kenny Omega and the Young Bucks. The Kingdom did everything they could to make Bullet Club members look good, to the point of making themselves look weak. I was let down in this match because I was supposed to see three of the best wrestlers on the planet, Omega and the Young Bucks, and instead I saw three guys who seemed to want to goof around. I do understand that you want to have fun in the ring, but comedy eclipsed the art and skill that I desperately wanted to see from these individuals. I know wrestling fans across the world have been going on about Omega being the best on the planet, but the people sitting around me were let down too. They commented that the match looked like a local indy match. So sad.

Over all Ring of Honor put on an amazing show that featured a world class grew that electrified the crowd. With the exception of one match, the action was high calibre and what we have come to expect from the great athletes in Ring of Honor. 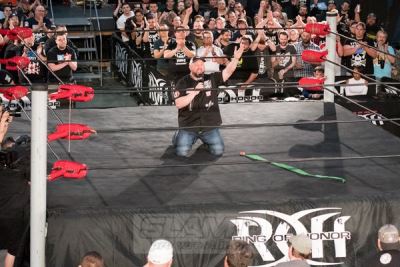 Taking a page from his old partner, Bubba Ray testifies.

Thank you to Ring of Honor for hosting my Canadian crew at their wonderful event!