In a world where life many times imitates art, no one brings more class and sophistication to professional wrestling and his home promotion of the National Wrasslin League than Niles Plonk.

Plonk (Kraig Keesaman) is a wine connoisseur who hails from Napa Valley, California. Often accompanied by his man servant Belvedere, and most frequently by the Lakota Warrior Red Cloud, his servant for past 30 days.

Although Plonk claims to be from Napa Valley, he actually is from Osborn, Missouri, and returned to the family farm after graduating from college and started his own winery, the Windy Wine Company in Osborn, Missouri. 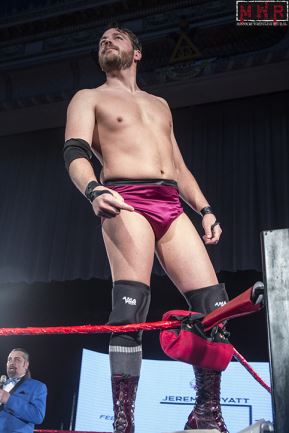 Plonk first started wrestling at age 17 in 1999 in St. Joseph, Missouri, after being trained by Sonny Myers. Plonk was training in martial arts at the time and his instructor got him in touch with Myers.

“We would work out 4-5 days a week, usually evenings for several hours each day,” Plonk explained. “The ring was in a garage and both were owned by Lord Littlebrook. It was a great ‘old school’ environment.”

The 35-year-old Plonk has wrestled all over the Midwest over the last 18 years, including 3XW in Iowa, Metro Pro Wrestling in Kansas City and Harley Race’s World League of Wrestling promotion in Missouri. Plonk has also wrestled in Nebraska, Texas, Oklahoma, Arkansas, Georgia, Tennessee, Kentucky, Florida and Colorado.

Plonk, who is not under an exclusive NWL contract, feels he has found a home in the NWL, which is based in Kansas City, Missouri. “It is very exciting! There has never been a promotion around that is doing the things in the Midwest the NWL is doing. The NWL will probably be the only place I will be with, with the expanded scheduled dates they have.”

“Major Baisden (owner of NWL) is a great guy and doing all the right things to draw and gain true wrestling fans, it’s very refreshing and exciting,” Plonk explained.

Growing up a wrestling fan in the 1990s in Missouri, the six-foot, 205-pound Plonk was was a big fan of Mick Foley, who was an inspiration as a wrestler, and enjoys watching matches from Curt Hennig, Ricky Steamboat and Vader. Watching Plonk wrestle, his mannerisms in the ring reminds me of a 1993 and 1994 Lord Steven Regal from WCW. “I am a huge fan of Regal also,” Plonk said.

Plonk is a fan of old school wrestling, using wrestling holds and selling to tell a story in the match. Plonk uses such holds as the “grape stomp” and the “corkscrew elbow” to finish off his opponents.

Earlier in 2017, Plonk feuded with the Lakota Warrior, Red Cloud and won a match that Red Cloud pledged he would win or become Plonk’s man servant for 30 days. So Red Cloud served as Plonk’s man servant, in a role reminiscent of the David Von Erich and Jimmy Garvin feud from 1983, only in that feud, Garvin was Von Erich’s servant.

“I really like the storytelling and character development of the NWL” Plonk explained. “I think that is something that will always be the best part of wrestling. The modern indy movement has strong fans, but does not really draw in new fans. Characters are where it’s at.” 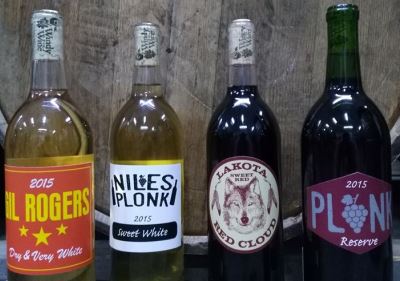 Plonk knew he wanted to come back to the family farm after college, but not in the standard row crop and livestock trade. Plonk started the Windy Wine Company in 2009 on the family farm in Osborn, Missouri.

Niles Plonk, in his own words, is a high society elitist. “I am able to draw from my experiences in the wine industry; with the snobs, the terminology and the atmosphere and use that for Niles Plonk. I had been playing around with a wine themed gimmick, putting ‘vintage’ in front of my name before the NWL, but when I got the name Niles Plonk and saw my gear for the first time, heard my music and entrance video, that was when it really brought the character out. It was like a switch flipped on in my head, all of a sudden I knew who Plonk was, how he acted, talked, his moves, etc. It all came very natural.”

For now, Plonk is enjoying his time in the NWL. “The NWL is pretty much all I do now, I can work other promotions but it’s more fun at NWL.”