Bellingham, Washington, a scenic city of 80,000 about 25 miles south of the Canada-U.S. border, is known to Vancouverites as a handy destination for cross-border shopping. As far as wrestling is concerned, Bellingham had a long history during the 20th century as a town in the shadow of Vancouver — and one wrestlers and promotions based in Vancouver would get to from time to time. 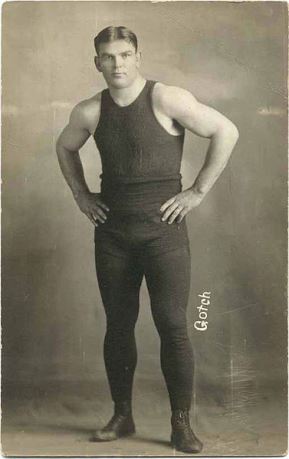 But for a brief period over a century ago, from 1903-04, it was Bellingham that cast a strong shadow on wrestling in the Pacific Northwest on both sides of the border — and was perhaps the unlikeliest city ever considered, by many, the centre of professional wrestling in North America.

After wrestling shows gained popularity in the eastern United States, professional wrestling made its way to California in the 1870s and, from there, up the West coast to Oregon in 1883. But with a relatively small population — Portland, Seattle, and Vancouver all having fewer than 100,000 residents until the early 20th century — the Pacific Northwest remained largely on the sidelines during the next two decades as the wrestling business gained steam in larger population centres of North America, and it was not until the early 1900s that pro wrestling found real traction in the Northwest.

Prominent wrestlers around the turn of the 20th century included Farmer Burns, Tom Jenkins, and Evan “Strangler” Lewis, but the biggest attraction in American professional wrestling in the early 20th century was Frank Gotch. Gotch, a son of German immigrants who settled in wrestling-rich Iowa, traded victories in 1903 and 1904 with Jenkins and earned recognition as the American champion. The second Gotch-Jenkins meeting, won by Gotch, was a major early milestone in the history of wrestling in the Pacific Northwest. That match — a surefire attraction that could have headlined at many major venues nationwide — took place on January 27, 1904, in Bellingham.

During that period, Bellingham — with a population of about 20,000 at the time — was often hosting several wrestling events per month at the Beck Theater, considered the city’s top entertainment venue with seating for over 2,000, and major wrestlers including Gotch, Jenkins, and Farmer Burns made multiple appearances at the Beck during the early part of the 20th century and especially in 1903-04, a period in which many observers considered Bellingham the centre of North American professional wrestling.

Bellingham for that brief time was the hub of a wrestling circuit that included other stops in the northwestern part of Washington, along with Vancouver across the border. According to Canadian wrestling historian, former West Coast wrestler, and author Vance Nevada, it was during the Bellingham heyday that pro wrestling made its Vancouver debut. Nevada reports in his book Wrestling in the Canadian West that often biweekly wrestling exhibitions held at the Vancouver City Hall Auditorium and the Opera House in Vancouver regularly drew crowds exceeding 1,000 for single-match events in 1903, and within ten months of professional wrestling’s debut in Vancouver, a Frank Gotch American Heavyweight title defense at the British Columbia Provincial Fair in the Vancouver suburb of New Westminster on Oct. 5, 1904, drew a crowd — outstanding for the time — of 7,000 (with some estimates of double that number). Gotch’s opponent was an Ontario-born grappler named Dan McLeod, who was another prominent wrestler in the Bellingham circuit. 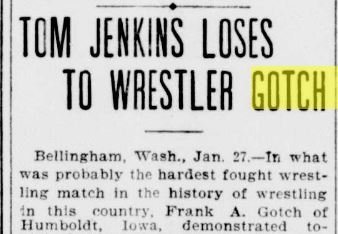 Gotch won the match decisively, as he usually did. Questions of wrestling’s legitimacy aside, Gotch was an outstanding athlete and the centrepiece of a promotion for which Burns, Gotch, and fellow wrestler Joe Carroll had chosen Bellingham and the nearby area as their base of operations in the early 1900s. Gotch was already established as a big-time wrestling attraction in the Midwest — as was his trainer Burns — when the Burns-Gotch camp decided to move into Bellingham for a time before taking their travelling wrestling show to new paying audiences.

According to former Western Washington University professor Jerry Johnson, who has researched the little-remembered early-1900s era of Bellingham wrestling extensively, the Burns-Gotch camp brought other key wrestlers from their clique in the Midwest to Bellingham to enhance their chances of making their endeavour in western Washington and southern British Columbia as profitable as possible. Among key wrestlers Johnson says Burns and Gotch dispatched to Bellingham and area were Carroll, Frank Coleman, Duncan McMillan, and Emil Klank — all big names in the wrestling world. Another key name was John Berg, who had done some wrestling in the Midwest before surfacing in Bellingham and, later, would be associated with Gotch and Burns for several years back in the Midwest. “Everybody who fought out here was basically tied to the Farmer Burns group back in Iowa,” says Johnson. 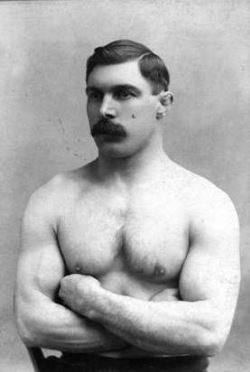 Wrestling appealed to miners and loggers in the area, says Johnson, and gambling was a big part of wrestling at the time, hauling in hefty wagers from “fans” who might just as well have been drawn to a racetrack. Bellingham’s birth as a city — resulting from the amalgamation of several neighbouring communities — coincided with the 1903-04 heyday of wrestling in western Washington, and residents of the city had much on their minds besides wrestling. Yet Johnson says articles in local media at the time linked Bellingham’s prominence on the national and international wrestling stage to the city’s overall prosperity, well-being, and rising profile. Wrestling at the elegant Beck Theater, he says, “just sort of elevated everything” — especially on the night Gotch made headlines by putting away Jenkins before a crowd of 3,000.

As for the legitimacy of the matches during Bellingham’s golden era, newspapers in Washington and British Columbia debated where the line between legitimate sport and show may have lain. Yet it is clear that while wrestlers in the Burns-Gotch troupe may have tested one another in the ring, serious attention was given to putting on shows that would be entertaining and continue to draw strong crowds until Gotch and company decided it was time to pull up stakes and move on — which happened in late 1904, although some of the wrestlers featured in Bellingham decided to stay in the Northwest.

After leaving Bellingham, Gotch was a major attraction in much of the United States as well as in Montreal, and his success put him on a collision course with George Hackenschmidt, a powerful Estonian who had defeated Jenkins to earn recognition as a world champion in the United States. Gotch and Hackenschmidt had their first meeting at Chicago’s Dexter Park Pavilion on April 3, 1908, with Gotch emerging victorious after a gruelling two-hour match before a crowd of 8,000. From there Gotch defended his widely-recognized world title in a series of high-profile matches highlighted by a return encounter with Hackenschmidt on September 4, 1911, which drew a then-record 30,000 spectators to Chicago’s Comiskey Park.

Gotch won the return match decisively, but while he remained a popular champion and a legitimate celebrity beyond wrestling following his rematch with Hackenschmidt, Gotch retired just a few years later and died in 1917 at the young age of age 39 as a result of a kidney ailment.

Regarding Gotch’s historical impact on wrestling in the Pacific Northwest, Washington wrestling promoter, podcast host, and wrestling historian Matt Farmer says that, while Gotch may have put Bellingham on the map as a key wrestling centre for a time in the early 1900s, he had a habit of “going into regions and running them dry.” Bellingham was no different, Farmer says. “In hindsight, Frank Gotch didn’t leave the business in better shape than when he entered it. Much like the Midwest after the second Gotch-Hackenschmidt match, after Frank left the Northwest it suffered a few years of bad business. I guess you can say they hot-shotted the territory” — setting their sights on short-term profit rather than long-term success — before leaving northwest Washington in search of new moneymaking opportunities elsewhere.

In later years, Bellingham became a regular stop on the circuit for, primarily, the Oregon-Washington Pacific Northwest Wrestling/Northwest Championship Wrestling promotion in the 1950s and 1960s; Vancouver’s All-Star Wrestling promotion in the 1960s and 1970s; and Washington-based Super Star Championship Wrestling in the 1970s. But Bellingham’s peak as a wrestling centre of note clearly was from 1903-04, when Frank Gotch and friends ran world-class shows at the Beck and took their troupe to Vancouver as a lucrative sideline.