Mat Matters: Fond memories of an AWA ballpark show in 1988

For those of you who have read my Mat Matters columns you know I often use it as a source of therapy to tell the story of the battle I had with my parents over my love of professional wrestling. This article continues the story, but it falls more in line with experiencing the artistry, magic and, at times, beauty of the sport.

It was August of 1988, I was 14 years old and I saw a poster in the window of the local convenience store advertising a professional wrestling card. It would be live at the Merritton Baseball Park, in St. Catharines, Ontario, on Sunday, September 4th, which happened to be Labour Day. 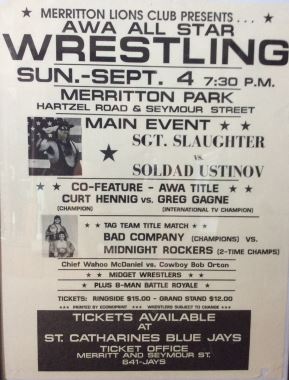 I was thrilled! This was not just an independent wrestling show, but the big time was coming. The stars of the American Wrestling Association were set to perform. The poster advertised Curt Hennig, Sargent Slaughter and the Midnight Rockers!

I remember going home and asking my parents if they would take me to the event on the other side of town. If you have read my other articles you already know the answer — no. As usual in this cat and mouse game I was ready with a plan. My parents said they would not pay for the ticket. Little did they know that I had already bought the ticket.

Further, I would not be allowed to attend alone and, since they were not going with me, they thought they had squashed my little dream. Once again I informed my guardians that my pal Geoff had already bought a ticket and would be joining me.

In a last ditch and slightly pathetic effort I was informed that I would have to find my own way there. Not a problem. I had my bike and was ready for adventure. Defeated, my parents just pretended that the conversation never happened.

A week before I was set to go to my first live wrestling event my father brought home Norm DeCosta’s wrestling column in the Toronto Star. I noticed that my father looked a little sad as he passed me the newspaper clipping. He knew how much I was looking forward to the show and deep down he wanted me to be happy, but he was the bearer of bad news.

The article told me that Jerry Lawler was now the AWA champion having disposed of Curt Hennig. Not only that, but Hennig was rumoured to be WWF bound. It went on to say that the Midnight Rockers were also jumping leagues. Three of the wrestlers I had been following in the wrestling magazines and on the AWA’s show on TSN would not be performing. I was crestfallen.

The day of the show arrived and Geoff and I rode our bikes to the small baseball stadium which was home to the Toronto Blue Jays minor league baseball team at the time. We arrived at six p.m., a full hour-and-a-half before bell time. We were excited.

When the gates opened I rushed into the stadium where the usher explained that I had field tickets which meant I would be seated on short wooden bleachers that you would find at your local park. These bleachers were placed around the ring. I picked a great seat on the edge three rows up.

From start to finish I was spellbound by the action in the ring. For me the match of the night was Wahoo McDaniel against Manny Fernandez. They were clubbing each other. I remember thinking that this match was real. At one point McDaniel dragged Fernandez towards me. Momentarily McDaniel locked eyes with me and motioned with his head to indicate that I needed to move out of the way. Fernandez’s head was then slammed into the seat I once occupied. The vibrations from the impact of his skull shook the bleachers and when Fernandez raised his head it was covered in blood. At that moment I knew I was watching two skilled and intense wrestlers.

Later on the tag team champions, Bad Company, Pat Tanaka and Paul Diamond, came to the ring with Medusa Miceli to down the Top Guns in a fun, fast-paced match. The song “Dream Weaver” might as well have been playing in my head as I was infatuated with Miceli. She did not look like the adult women in my hometown. She was ravishing and I was smitten. After the show I had the chance to meet her and she graciously signed an autograph for me. I wowed her with my silent but deep thinking demeanor.

I had the chance to see Slaughter defeat Soldad Ustinov. Sarge was announced as the Americas champion and I wondered who he beat for the title. I also wondered why he was so fat. Later when Greg Gagne came out with the AWA TV title I noted that it sure looked like the Americas belt. I also got to see Jerry Lawler as the AWA World champion. I had followed him primarily in the wrestling magazines as Memphis wrestling’s TV show didn’t reach Canada. At the end of the show Lawler signed a wrestling magazine for me.

On my way home a saw one of the posters for the event stapled to phone pole. I pulled my bike over and carefully pried it off and rolled it up. My bike ride home was exhilarating as I replayed the matches in my head marveling at the skill of Fernandez, McDaniel and Lawler. Often, my mind would wander to the beauty of Miceli. My first wrestling event was definitely one I remember fondly.

Caleb Smith is hoping that someone might have the full results from that event and could send it to him. Perhaps Medusa Miceli would like her now-middle aged admirer to interview her?