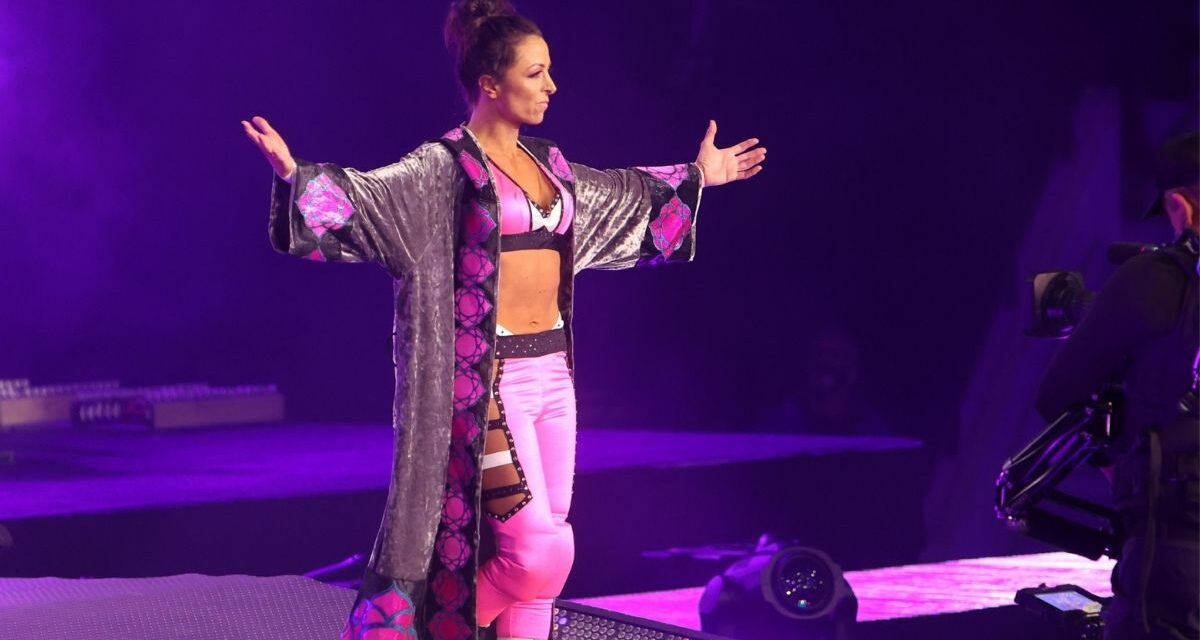 Throughout her wrestling career, Serena Deeb’s toughest opponent has always been herself.

“Truthfully, I spent a lot of my career with this deep inner conflict that I really am still uncovering,” said Deeb, who retired in 2015.

“I entered professional wrestling at age 18; fearless, young, naive and in love with passion. I remember when I first felt enormous self-doubt and low self-esteem begin to brew, and I had to make changes to myself cosmetically to try and be this image of what I thought was ‘beautiful.’ I spent a lot of time and energy chasing this illusion of beauty, losing belief that my wrestling and talent was enough.” 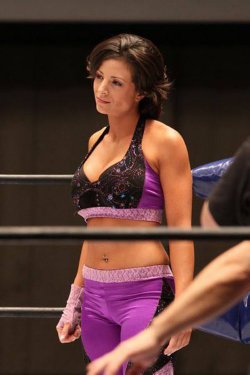 But that talent took her to six Ohio Valley Wrestling women’s championship reigns, seven tours of Japan and landed her a key role in C.M. Punk’s Straight Edge Society alongside Luke Gallows. It also brought her back into the fold with WWE’s Mae Young Classic, an all-female tournament airing exclusively on the WWE Network, beginning Aug. 28.

Regardless, Deeb got into a “detrimental cycle” of trying to prove she was good enough, but not necessarily believing that herself.

“It was very paradoxical,” Deeb said. “Losing grip of my self-love and self-empowerment was a big part of my experience. I think it is really difficult to make major internal changes when you are struggling to ‘keep up with appearances.'”

The Mae Young Classic, though, has given her a second chance. The tournament, according to Deeb, is a “testament” to the journey women have been on through the wrestling industry as a whole.

“It is such a statement to the profound level of influence that strong women leaders have in our society,” Deeb said. “WWE did a tremendous job gathering women from many different countries, with all different styles. The diversity in this tournament is a stark contrast from where things were even just five years ago, which is truly touching to witness.”

Today’s athletes, according to Deeb, have created an atmosphere that “we all can be inspired and empowered by.”

“Being a woman in the industry carries its own set of challenges and obstacles, and every time the bar is raised, I believe we all get better, both as wrestlers and as human beings,” Deeb said. “We should all be celebrating the success of women’s wrestling and those who are painting a new picture for young girls as to what a strong female is.”

SHIMMER ‘WAS A COMMUNITY 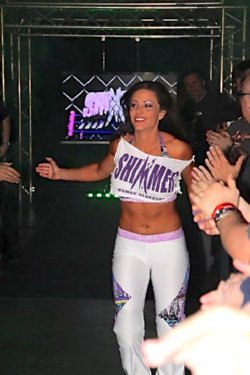 Deeb spent a good portion of her in-ring career — off-and-on for seven years — in SHIMMER, a company she called “groundbreaking” for women’s wrestling.

“There was a collective force of passionate women behind SHIMMER, and we continuously raised the bar for one another,” Deeb said. “We supported each other and made magic together.”

For Deeb, SHIMMER was more than a locker room — “It was a community.”

“The independent scene created opportunities for women who weren’t able to get national exposure with the major companies at the time and allowed us to experience working with an array of different people, and from different countries,” Deeb said.

Those who worked for SHIMMER, according to Deeb, learned how to perform for crowds of varying size and preferences.

“To me, that is one of the magical aspects of wrestling; the energetic exchange that is going on, not only between opponents, but between you and the fans as well,” Deeb said. “Well, everything comes full circle, and it was great to see SHIMMER acknowledged so much at the Mae Young Classic. Much respect.”

Deeb’s career before her return to WWE also took her to the Land of the Rising Sun, beginning in 2011. She said she worked mostly for three-time WWE Cruiserweight Champion Tajiri’s companies. Japan is her favorite place to wrestle, not only because of the beauty in the country and culture, but the honor and respect.

“Wrestling is respected in a different way there, and technical ability is very appreciated,” Deeb said, “The crowds also react differently, so it was both a challenge and a great reward to learn what worked there and what did not.” 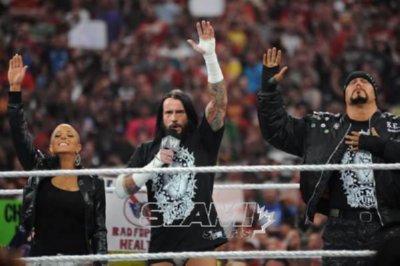 Serena Deeb, CM Punk and Luke Gallows pledge allegiance to one nation, under Punk, at WrestleMania 26 at the University of Phoenix Stadium in Glendale, Arizona, on Sunday, March 28, 2010. Photo by Mike Mastrandrea

Deeb signed with WWE in 2010, becoming the third member of the Straight Edge Society. Upon hearing the news, she collapsed on the floor, tears of joy filling her eyes.

“I called my Mom immediately,” Deeb said. “It was a feeling that will never be duplicated.”

Her interest in wrestling piqued during the “rebelliousness of the Attitude Era,” when she was the “epitome of a tomboy and passionate athlete.” The desire to get in the ring began at age 12, and six years later, she moved to Louisville, Ky., to begin training at Ohio Valley Wrestling.

“In discovering wrestling, and seeing strong, vibrant, athletic women who were kicking ass, I was captivated immediately,” Deeb said. “The stories that were being told in bright colors and loud music through remarkable physical acts, steering my emotions and speaking to my inner rebel.”

Deeb’s introduction to the Straight Edge Society — including having her head shaved — came on the heels of being medically cleared to wrestle after suffering a broken jaw in Florida Championship Wrestling.

“I went from three months of being really depressed with that tough injury (my jaw had to be wired shut) to all of sudden being on TV in a hot spot,” Deeb said. “Things truly can change in an instant. Such is the beauty of life.” 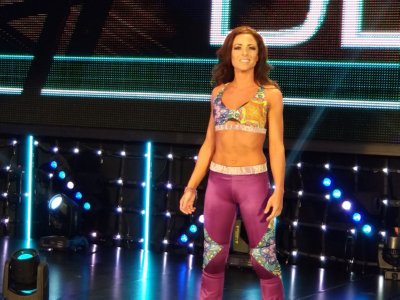 Her time with the Straight Edge Society was a “learning experience” in regard to group dynamics, how to highlight others and “find balance amongst the different roles that you each play.”

“Personally, groups and stables in wrestling have always been my favorite part to watch,” Deeb said, “so it was very unique to receive that role and participate in the very thing that initially drew me to wrestling.”

However, she said she wished would have had the opportunity to wrestle more as part of the faction. She had just one televised match in her time with WWE.

By the time she landed the coveted WWE contract, the Divas Championship had been in existence for two years, and Michelle McCool had unified the Divas and Women’s titles that September.

“Today, however, I truly value the experience that I had, even if it didn’t contain what I felt I wanted at the time,” Deeb said. “Having the privilege of wrestling in the Mae Young Classic after everything that I have been through, both professionally and personally, was the full-circle moment that helped validate that it was all worth the wait.” 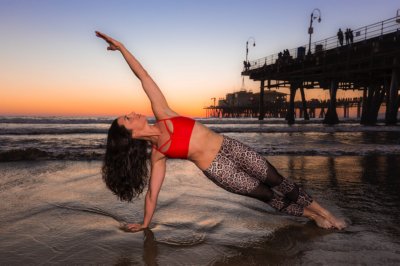 FROM WRESTLING TO YOGA MAT

It wasn’t until Deeb left the wrestling industry two years ago and discovered yoga — “ironically enough finding my body on another mat” — that she learned to love herself again.

“It is easy to lose yourself in things that you place such a high value on, as I did with wrestling, and especially WWE,” Deeb said. “You place your happiness in the hands of other forces, and when conditions change, you crash.”

Deeb’s first venture into the world of yoga was a hot-yoga class in 2010. The teacher challenged her to return. So she did. For 30 consecutive days.

Soon, Deeb had completed her first teacher-training program, and living in Los Angeles has afforded her the opportunity to experience “countless” forms of yoga.

“I keep falling more and more in love with it everyday,” Deeb said.

“In both wrestling and yoga, it is valuable to find a balance between flexibility and strength, whilst relying on a stability that prevents injury,” Deeb said.

The artform has helped her in-ring career through healing her body, but the toll the ring has taken on her body still presents challenges.

“I never took care of my body, and, after 10 years in wrestling, I was pretty wrecked on many levels,” Deeb said. “I also had breast implants for seven years and that was very tough on my body and my back.”

When she found yoga, Deeb said, she had more strength than flexibility. In balancing the two, she has become more agile. 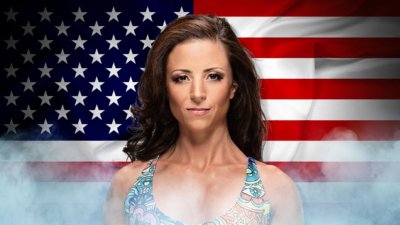 LOOKING TO THE FUTURE

In the two years she’s been away from the ring, she has been able to stay true to herself and “understand the bigger picture in all of it.”

“My journey wasn’t always glorious,” Deeb said. “In fact, it got ugly and upsetting at times. I am so grateful for all of it, for molding me into who I am, and instilling in my soul a compassion for others who struggle. If I can use my experience to help others, that is my definition of living my dream.”

The six-time OVW Women’s Champion said yoga has been “the driving force” behind the majority of the positive changes in her life.

“I remember starting to feel so upset around wrestling for some time before I retired, and so at home and at peace on my yoga mat,” Deeb said. “Yoga empowers you and helps you find balance in mind, body and spirit. It is this beautiful process of self-exploration, where I slowly unlearned the habit of judging myself so harshly (as I always had in wrestling), and re-learned this foreign concept of loving myself and having appreciation for every moment.”

Though she’s not sure where her in-ring career will lead following the Mae Young Classic, the former Straight Edge Society member said “to never say never to anything, and to always remain open.”