TORONTO – If preshow is any indication, Roman Reigns is going to have problems tonight. Little kids starting a “let’s go Cena” chant and getting crushed by the “Cena sucks” crowd. 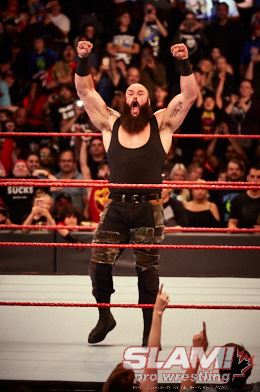 A lovefest for Braun Strowman. Photos by Andrea Kellaway

Main Event tapings: Apollo Crews vs Curt Hawkins. Hawkins got super heat from saying he was happy to be in his favourite Canadian city, Montreal. Solid match. Crews FTW with his powerbomb.

Elias in the ring with his guitar. Crowd hates him. Good for him. Elias makes fun of Kalisto and then sings “O Canada,” and says it’s a worthless place and we should mask our ugly face. Kalisto out to big lucha chant. Walk with Elias chant halfway through. Really good match. Crowd was into it the whole time. Elias reversed Salina del sol into his neckbreaker ftw.

Opens with Miz TV. Miz wants Jason Jordan and gets Kurt Angle instead. Crowd loves him and says no Jordan for Miz, instead he gets Brock Lesnar. Enormous reaction for Lesnar who kills the whole Miztourage. Great opening segment.

1st match: Seth Rollins v Sheamus. Crowd thinks Sheamus looks stupid. “Crossfit Jesus” sign for Rollins. Sheamus wins and they beat on Rollins. Big “we want Ambrose” chant. Kids behind me were not impressed with the non save from Ambrose. 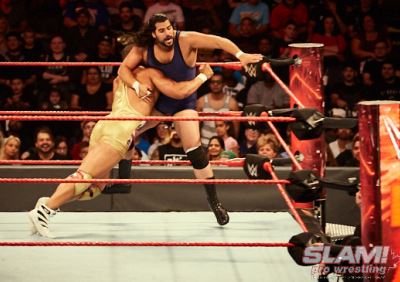 Tomer Shalom, called Jean Pierre Goulet on Raw, got some love from the local crowd, if not from Jason Jordan.

Bayley out to a good ovation but no one likes that she’s hurt. Crowd is pretty bored during her promo. Less reaction for Sasha Banks than I would have figured.

3rd match: Sasha Banks v Alicia Fox v Emma. No reaction really for Emma or Alicia. Big reaction for Alexa Bliss coming out for commentary. Emma got some love a few minutes in. Crowd is pretty quiet for this. Alicia didn’t kick out and the ref has to stop his count. Crowd booed the hell out of him including a “this ref sucks” chant. No one believed that anyone but Sasha was winning.

Braun Stroman promo got cheers. Looked like he was reading cue cards.

Good pops for both Enzo and Big Show entrances. Saw a sign that said “swipe left for Enzo.” Good promo but not a lot of noise from the crowd. Mixed reaction for promo by Gallows and Anderson. Nerds line was over. Crowd liked the Austin Powers reference.

Finn Balor out to a big pop and tells Bray Wyatt he will finish whatever Bray starts. A little appear and disappear magic from Bray. Crowd is into these two. 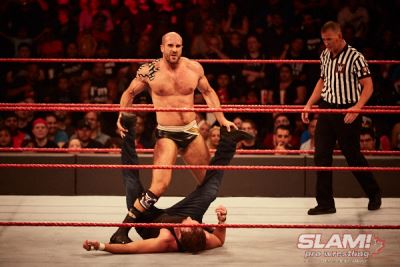 Cesaro pauses to listen to the crowd’s excitement over applying the sharpshooter.

5th match: Dean Ambrose v Cesaro. Crowd was pretty quiet until the superplex. Canada loves to see the Sharpshooter and Dean got booed soundly for stopping it. Standard big Canadian reaction for the sharpshooter when Cesaro finally laid it in. Big pop for the Ambrose win though and crowd instantly wanted Seth Rollins. Massive “YES!” chant for the aoparent Shield reunion and then booed the hell out of Seth for walking away.

6th match: Ariya Daivari v Tozawa. No more purple ropes or logos on the mat but still purple lighting and cruiserweight on the screen. Complete silence for much of the match. Some fans tried to get a purple ropes chant going but it died. Polite applause for the senton and the win for Tozawa.

7th match: Mickie James v Nia Jax v. Dana Brooke. Nia with a mixed reaction, none whatsoever for Dana, and solid cheers for Mickie. Mickie missed by a mile with her kick to Dana. I dont know how it looked on TV but Nia absolutely killed Dana with that clothesline, and the leg drop. Ouch.

They were having serious difficulty changing the canvas before the main. Got it right before the break ended.

Cass and Angle promo. Good reaction for the idea of Cass v Show, some mild cheers when they added the Enzo in a shark cage stipulation. Crowd is pretty exhausted.

8th match: Roman v Braun Strowman, last man standing. Canada loves Braun – some fans were bowing to him. So much hate for Roman. Roman hitting the barricade nearly collapsed the whole thing on the hardcam side. Crowd was very happy Braun hit Roman with the stairs, moreso the second time, and dug the dropkick from Braun to stop the spear. Braun missing the spear looked meh. Crowd lost their minds for that office chair toss and really got into the last half. Massive pop for Samoa Joe out of the crowd to choke out Roman.

No dark match but Braun tells Roman to “go back to your kennel, little puppy.”

Fun signs of the night:

Holly Lengyel and Matt McAusland are from from Windsor, Ontario, and are a part of the Ontario indy scene, often helping out with production with promotions such as Border City Wrestling and Smash Wrestling. Reach Holly at [email protected], and at @hollyLphotos on Twitter.