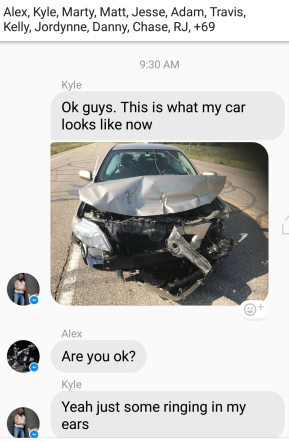 K-Dos’ message to our group, with a good shot of his car, or what’s left of it.

No sooner did I write my last piece than we were informed in our Facebook group message that one of our guys joining the tour a few days late had totaled his vehicle en route to Dauphin, Manitoba. Thank goodness both he and the man in the other vehicle walked away unscathed.

So, he was forced to miss night 4 in Dauphin, and that “card subject to change” policy was enacted once again. However, despite his TWO travel mishaps, he didn’t miss a beat. Day 5 in Prince Albert, he showed up with a nice, brand new rental car. I’ve gotta hand it to Kyle King, a.k.a. K-Dos. The man has let NOTHING stop him from making this tour, and showed up with that ever positive, upbeat personality that he has. I salute him. THAT’S dedication!

The tour has smoothed out a little bit as far as getting things on track. You’d be surprised how easily things can go wrong.

What’s that? Things can go wrong? Well, take me for example. I was put in charge the other day of scheduling hotels for Saskatoon. Not a problem. I’m right on it. I’m your man. Alrighty, five me a fee minutes… ohhh-kay, annnnd DONE! Sweet. Got it, papa! You need it handled, then just come to ol’ TKo. He gets things handled as it should be. So I’m feelin’ pretty good about myself in Prince Albert, knowing now that we’re hooked up the following day in Saskatoon. 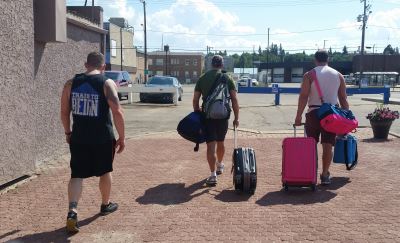 Garrison Creed, Silas Young, and Danny Duggan leaving the hotel in Prince Albert, as we take off for Saskatoon.

So, I wake up, like I do around 630 a.m. for reasons unknown, reach over and check my phone. I figure I’ll look over the hotel itinerary and map out directions to the hotel so it’s in my map, ready to go. And then I see it — I had booked the *&^%$ hotels for THAT day, as in the very day I booked them, when in fact, I needed them for the following day. Ohhhhh s—!

Time to wake up! So up I go. Brush teeth, pop in contacts, throw on new clothes and wander on down to the hotel restaurant with pen and paper in hand. I’ve got calls to make with the hopes that both Expedia.com and hotels.com will understand the simple mistake and be able to re-book these two rooms for the day we need. 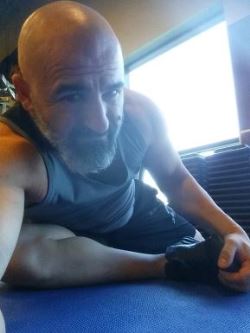 Me stretching out at Good Life Fitness in Prince Albert, SK.

I put myself in kind, patient gentleman mode, and start with the calls. After an abundance of “thank you kindly’s” and “I appreciate this so much’s” the rooms were re-booked without a problem. Crisis averted! So, thank you to hotels.com and Expedia.com for the great service and understanding.

So now, here we are. It’s currently 12:3 p.m. on Day 8. I sit comfy in a car as we knock out the six-hour drive to St. Albert, Alberta, a suburb of Edmonton. I really love it out here. Well, I love it in EVERY city we go to. There’s just a peacefulness, and a kindness up here that I don’t find anywhere else.

I also had a chance to watch some of the matches from the past few nights, and I’ve gotta say, we really have a solid crew who are churning out some AMAZING matches! And it’s showing with the fan feedback we’ve been getting. The company’s Facebook and Twitter accounts have been lighting up with positive feedback, pictures and videos that fans are sending in. Our momentum keeps building. 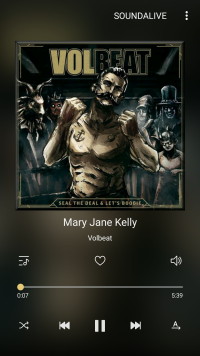 One of the kickass tunes crankin’ while I knock out cardio.

We’ve also had out usual great gym hookups, so I’ve been feeling great this tour, as usual. And I’ll tell ya what — I may be tired going of the gym, but you get on that elliptical machine and put some good rock-n-roll in your ears and before you know it, 35 minutes are gone and I’m drenched with sweat.