Brennon Martin’s book on his grandmother is about far more than the family legacy. After all, his grandmother was Christine Jarrett, who spent 50 years in the professional wrestling business, and saw her son, Jerry, and another grandson, Jeff, get involved in the mat game too.

Christine Jarrett — “Teeny” to some, “Ms. Christine” to many — worked her way from selling tickets in the back of a Nashville, Tennessee, shoe store to running a network of towns for Nick Gulas and Roy Welch. She later promoted alongside her son, Jerry. 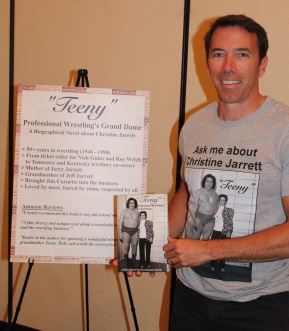 Brennon Martin poses with his book, Teeny, at the Cauliflower Alley Club reunion in Las Vegas in May 2017. Photo by Greg Oliver.

Along the way, she laid down the law:

Talking to Martin in person at the recent Cauliflower Alley Club reunion, it’s evident the love and respect he still has for his grandmother, who died in November 1998.

“She brought our family from the depths of poverty in the early and mid 20th century to middle class by the ’60s and ’70s, and I just felt that hers was a story that needed to get out there,” said Martin. “I felt a lot of gratitude for the fact that, sort of everything I have is because of the work that she did in this business. She loved it. I felt like that she wasn’t getting the credit that I wanted to see her get. I thought it was time to get her story out there.”

But it wasn’t an overnight project.

Martin is the son of Teeny’s daughter, and was raised in Nashville. He attended the Nashville prep school, Montgomery Bell Academy, and earned a full scholarship to the University of North Carolina. His career path took him into software, where part of his job at one point was writing “technology-related editorials for a weekly software newspaper.”

He embarked on the Teeny project almost a decade ago, and did most of the research and interviews at that point. Then he stopped.

“I wrote most of it back then, but it wasn’t very good and needed a rewrite,” Martin admitted. “It sat on a shelf for a long time. I finally, last year, picked it back up and polished it, got an editor, and got it ready and published it in February of this year.”

Martin was up for the new challenge, and reflecting back, he appreciates all the knowledge he gained about his own family.

“I learned stuff about my own family, asking her sister, my uncle Jerry, and others, my mother, questions that I’d never asked them before. I learned a lot of the family history that I just didn’t know,” he said. “But one of the things that I learned, and it was something more of a reinforcement of things that I thought but didn’t know about how loved she was. Everybody I talked to had pretty much the same thing to say about her, which was that she was just a wonderful woman who loved the business, who was looking to protect the business, and look after those that worked for her. I didn’t find anybody anywhere who had a single bad thing to say about her. Now, maybe I just didn’t find those people, but it was just very heartening for me to learn how much she was loved by those she worked with.”

It was rare to have a woman in a position of power back in the day.

“She was a single mom throughout her entire career. Her husband, Winston Jarrett, my mother’s father and Jerry’s father, he left when my mother was about six years old, and she never had another mate that entire time,” said Martin. “The fact that she was a single mom, working in a man’s world, and really earning the respect that she did, I think that was somewhat unusual for that time.”

The book, written more as a novel with historical details than a biography, is self-published, 244 pages, and available through Amazon in paperback, plus Kindle and Nook.

Not deeply immersed in the wrestling business, Martin faced an uphill struggle for interviews initially.

“There’s just so many other wrestlers out there that I didn’t know how to get in touch with,” he said. “Ultimately, I ended up with so much material from the folks that I did talk to that I just decided that it was time to stop researching and start writing. I wasn’t trying to create an exhaustive biography. I’ve written this book more in a novel format, so I wanted it to be something interesting to read, not just by wrestling fans but by others as well. So I had enough material to go for it and I did.”

Despite how “The Mouth of the South” still seems to be everywhere, Martin didn’t get to talk to him. “Jimmy Hart is just somebody that she just absolutely loved. He always showed her great respect. I remember every year, she would show me the Christmas card that he would send. And I didn’t get the chance to talk to Jimmy, to get information from him.”

There’s a reason Martin isn’t a big wrestling guy. “I was a wrestling fan as a child. When Vince McMahon smartened up the world, I felt a little bit betrayed because I realized that my grandmother, although she never told a lie, looking back on it, I realize her answers to my questions about whether or not it was real were always a little bit evasive. So to finally realize that I had been a mark like everybody else was, well, it was a little disappointing. After that, I found that I didn’t have the taste for it that I used to.”

With the book out there for a few months, Martin is awaiting feedback. His cousin, “Double J” has aread it. “I saw him in Orlando at WrestleCon and he was very supportive.”