The last time Sami Zayn was in Montreal, he main-evented the Bell Centre against his most famous rival, Kevin Owens, in a Street Fight that fans throughout the province still rave about. Tonight, he’s main-eventing again, against WWE champion Jinder Mahal. Zayn feels like he’s struggled a little bit recently, but that’s certainly not the case when he comes back home.

The struggle was real. He feuded with Samoa Joe, got lost in the shuffle in the Andre the Giant Battle Royal, feuded with Braun Strowman, then lost to Baron Corbin. Then he got a big win at the Battleground PPV against Mike Kanellis, but lost losing in a minute against Aiden English on Smackdown. Through all that, he continues to be a thorn in the side of Kevin Owens.

That’s the kind of year Sami Zayn had. 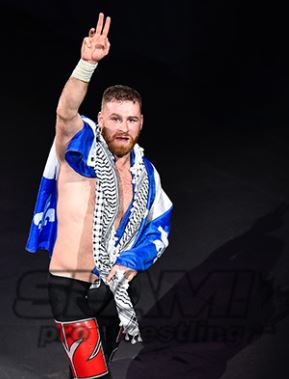 Sami Zayn at the conclusion of the last show at Montreal’s Bell Centre. Photo by Minas Panagiotakis, www.photography514.com

Unlike others, his talent is not in question here. But still, Zayn hasn’t been in any title picture since being on the full main roster and many wonder about the way he’s being booked. For a man who believes, rightfully so, into his own abilities, it’s not an easy thing to go through.

“I feel like many times since I’ve come up to the main roster, I’ve been the odd man out and it doesn’t feel good,” told Zayn to SLAM! Wrestling earlier this week. “Honestly I feel like I struggled a little bit, but there’s just so many WWE superstars that the fans are really invested in and when you have a card like that, like WrestleMania or SummerSlam, it’s hard to have room for everybody. It just burns sometimes when you’re not the guy figured in or featured. But it motivates you to keep doing what you’re doing and doing it well, because I have a firm confidence in myself that I will get to that point. You can either sit there and complaint about it or you can use it as motivation and I decided to use it as motivation.”

Hence the following question: Where does Zayn see himself in six months, closer to his third WrestleMania weekend?

“I just want to reach the point where I’m a guy who’s figured in and who’s considered when comes WrestleMania season, or SummerSlam season or Royal Rumble season. ‘What’s Sami’s match is gonna be?’ That’s the point I want to reach. I feel like Kevin (Owens) is at that point, where you always know he’s going to do something at the PPV. And I’m on a lot of PPVs, but every now and then, I’m being left out and that’s not okay with me.”

Rarely can one speak or write about Sami Zayn without mentioning his long-time “frenemy” Kevin Owens. And vice versa. Zayn is featured a lot in WWE’s latest DVD, Fight Owens Fight: The Kevin Owens Story. The documentary part brings the fans back to Montreal where the two met for the first time, all the way to working against another for the WWE. They wrestled together, they wrestled against each other, and they worked the same companies. When Sami signed his contract, they both felt like it was our contract. When Kevin won the Universal title, they felt it was our title. And in many ways, they see it as our DVD too.

“Yeah, part of me feels like it’s our DVD,” he said. “The one thing about our relationship, it’s always been this competitive nature. So there’s a part of me that looks at the DVD and says, ‘Damn, I want a DVD. I can’t wait to have my own DVD.’ But in a lot of ways, Kevin’s DVD does feel like it’s our DVD, because his story is pretty much our story. His story, my story, our story, it’s very interlinked, intertwined. And it’s not just the DVD. When I listen to a podcast and Kevin talks about his career, it just feels like I’m reviewing my own career because we just walked the same path. Obviously, he’s been a great enemy of mine, but I’m very happy about his success, because I don’t think he would be where he is if it wasn’t for me and I wouldn’t be here if it wasn’t for him. So no matter how much we fight, we will never lose that.”

Not too long after WrestleMania, Zayn switched brand, going from Raw to SmackDown Live. And guess what? Owens switched brands too, as if destiny could not separate them.

“As much as we’d like to get away from each other, the universe has a strange way to always bring us back together,” Zayn laughed. “Even on the independents, there were time when we went our separate way. When I left Ring of Honor he was still there and eventually I always came back. NXT, same thing. Now WWE, same thing, I don’t know what it is. There’s a weird cosmic magnetism there, and I’m past the point where I’m really fighting it. I just accepted it.”

Saturday night, Zayn is back in his hometown, in front of his friends, his family, but also tons of fans, ready to cheer for their local hero.

“It’s always special to come to Montreal and the Bell Centre. I remember my first match there against Cesaro and the last time, in a Montreal Street Fight against Kevin, which was a really, really special match, one of my favourite matches of my whole career. So any time I come to Montreal, especially in a featured match, it’s something I have circled on my calendar for months and months and months. So this is no exception.”

Tonight’s card is really stacked. Kevin Owens, AJ Styles, Charlotte Flair, Natalya, and also the Montreal debut of Shinsuke Nakamura. As far as Zayn goes, he’s going to wrestle against the WWE Champion, Jinder Mahal. But for him, Mahal may not be his biggest concern. Instead, Mahal might be just a stepping stone into what Zayn’s trying to achieve in his hometown.

“Between Kevin Owens and myself being the representatives of Montreal, I take a lot of pride in trying to see that Montreal’s attendance go up every time. I’d like to help make Montreal a town that WWE is very excited to come to every time because we’re gonna rock the house. Against Jinder Mahal, I will give everything I’ve got and trying to get WWE in Montreal back to full houses and fill that Bell Centre up every time.”

It’s SummerSlam Heat Wave tour tonight at 7:30 p.m. at the Bell Center in Montreal. Here’s the announced card for tonight: