Kozina’s Road Diaries: I was build for the nomadic life 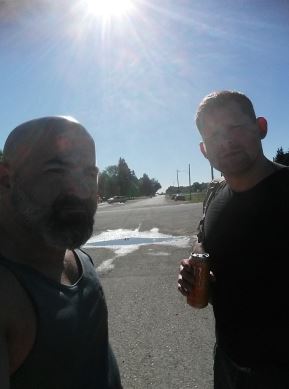 Garrison Creed and myself getting our morning coffee.

The past few days have been interesting to say the least. One of our guys, en route, from Kansas City, blew a tire and bent his wheel in North Dakota forcing a last minute change-up of the card. That phrase “card subject to change” is there for a reason.

The days have been jumbling together already, mostly because of the late nights and the sleeping pattern thrown into chaos. But we have still made time for the gym everyday so far, and making sure to get some good meals in.

On top of that, I’ve had some GREAT matches, first with Jon Gresham, who, if you know your independent wrestling, I don’t need to explain how great this guy is in the ring. Solid, smooth, and as professional as they come. And last night with Alex Anthony. Just copy and paste what I said about Gresham and that’ll tell you how good Alex Anthony is. It’s interesting… I’ve wondered if he’s another talent who has slipped through the cracks. It’s an interesting industry, this professional wrestling game.

The shows have also been top notch, and the fans have been living it! 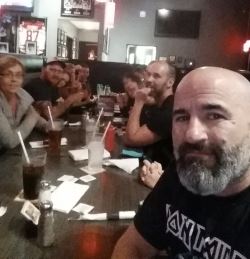 Enjoying dinner in Yorkton with fans and crew at our after party, which we have in nearly every town.

Last night in Dauphin, Manitoba, my bout was early so I was able to watch most of the show, and saw Silas Young and one of Pro Wrestling NOAH’s young lions, Kaito Kiyomiya, put on a masterpiece! Kiyomiya also had a very impressive bout a few days ago with Kenji Brea, who has joined the tour to participate in my full-immersion training program.

The ebb and flow of being on the road yields fun times, silly times, and serious times. The past 48 hours have been less about the silly fun that I prefer to have, and a bit more serious, and frustrating at times. But I also know that it all balances out as the days progress, so I’m not worried. That also means I don’t have funny stories to report at the moment. Touring isn’t for everyone. The road and the pace will eat you alive in an instant if you aren’t mentally strong. 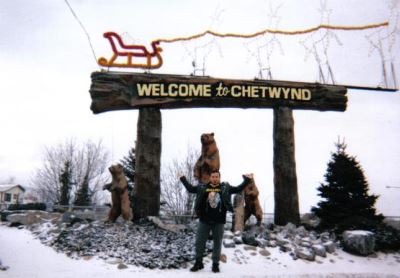 Talk about memories — this is me in Dec. 2004 wayyy north in Chetwynd, BC on tour. That was the last time I was in Chetwynd.

Today we will leave Yorkton, Saskatchewan, and take a three-hour drive to Prince Albert. I just love these cities. As frustrating and exhausted as I may get, I come alive with a smile when we get to the next town. I was BUILT for this kind of nomadic life. Living on the fringe of society, or so it feels, dropping in on these towns, to say hello to the appreciative people, taking in the sights, and breathing in the things that make each town unique.

For one day, this will all be just memories … not just for me, but for the guys half my age as well. Life goes by fast, so I make sure that I appreciate the “now” more than ever before.