Kozina’s Road Diaries: What to do when the belt breaks in half

Day 3 begins in Stonewall, Manitoba. Our last day of staying here. The first two shows were within driving distance, so we made one of the wrestler’s houses our home base for the first few days. Not it’s time to hit the road. 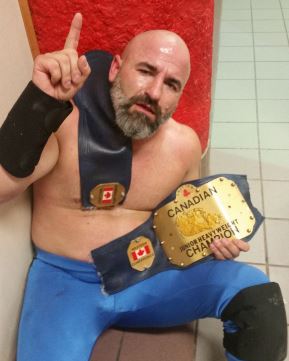 Ever had a belt break in half during a Tables, Ladders and Chairs match? Now I can say that I have!

Last night in Roseau River, Manitoba, in my match, a five-man Tables, Ladders and Chairs match, it was one of those “if anything can go wrong, it will” kinda times. So much so, that at one point, as I climbed a half-broken ladder to grab the belt, I fell off the aluminum death trap, and, clasping onto the belt with visions of grandeur of my sweet victory, open my eyes to find myself laying in the middle of the ring with half a belt in my hand! The faceplate and other half still swinging above me, while the crowd absolutely exploded at this unexpected situation.

So there I lay, watching this belt swing like a pendulum above me, and I thought, “Well I’ll be a monkey’s bare-assed uncle … what the hell do we do now!!!?!?!” It may as well have been a big ol’ middle finger swinging back and forth telling me to go fly one.

Seriously, I could write 1,000 words about this match and all that went wrong — two ladders broke for one thing! The belt was hung from the ceiling by a rope which draped over steel beams directly above the ring and tied off at the turnbuckle post, which I tied. So after two broken ladders, and a belt ripped in half pieces, I thought, “Hell’s bells, I’ll just untie the damn thing, and hopefully it doesn’t fall into someone else’s hands.”

Only problem is, I wrapped and tied this damn thing so tight I couldn’t get it undone. So here I am, like some kind of idiot, trying to unwrap this rope, and I hear the referee, who was on the floor standing below, say to me, “Who tied this damn thing!?!?!” I looked down from atop the ring post and simply said, “I did” and I hear him fire back with, “Ohhh, Jesus!”

Eventually I got it low enough to where I was able to stand on a chair and rip the rest of the carcass off the rope. The soft leather strap of the belt made it to where it pinched over the rope at the side plate, so even in undoing the strap, it remained stuck on the rope. That’s why it just didn’t fall when I grabbed and yanked it as hard as I could, but rather ripped in two.

So that’s how we roll in independent wrestling.

The great thing is, the crowd, and from what I was told, pretty much everyone on the roster and staff was watching this fiasco unfold with delight, as the match just sunk deeper and deeper into a sea of madness.

The rest of the card, I was told, was pretty action packed and booked really well. I was so busy prepping for what I envisioned to be this epic bout, that I didn’t get a chance to see any other matches last night.

Hey, at least nobody got injured with all the weaponry that was used. That’s always my bottom line. 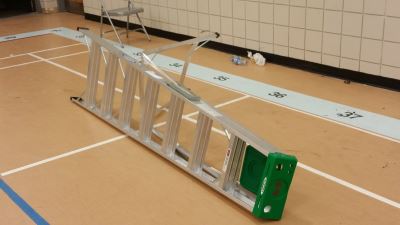 A broken ladder and the pile following our TLC match. 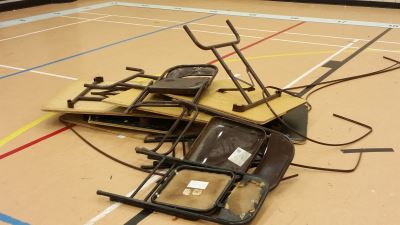 So today, we venture northwest to Gladstone, Manitoba. I’ll be in a six-man tag bout that should be interesting and a lot of fun, as I team with Kody Lane and Travis Cole against Shane Sabre, Phil Atlas and Jonathan Gresham. All three opponents are world class, so this will be a treat!

I’ll chime in, in a few days and I’ll tell you about one of my favorite Canadian tour activities, which I have lovingly dubbed, “weekend at Bernie’s.” That’s what’s coming up over the next few days, if I am not mistaken. We have such wonderful and amazing fans up here, I can’t stress it enough. And, sometimes those fans turn into dear friends. What a gift. And that’s what “weekend at Bernie’s” is all about.

So until next time, I’ll try and be normal, and not end up in chaos, but I’m fairly certain that’s a lost cause.

CWE 8/1 Roseau River First Nation, MB Results.
1) The brand new CWE Tag Team Champions Shane Sabre & Phil Atlas successfully retained in their first defense against Kute Kody & Tasty Travis when they pinned Travis.
2) “Hotshot” Danny Duggan scored a win over “Killa” Kaz Karter by capitalizing on a dodged spear with a school boy.
3) CWE Champion “Wrestling’s Strongest Man” Tyler Colton w/NWA Icon “The Russian Nightmare” Nikita Koloff retained against ROH Star “The Last Real Man” Silas Young with a powerbomb.
4) Due to a delayed flight Jonathan Gresham would not make it in time to team with Kaito Kiyomiya of Pro Wrestling NOAH against “The Crazed Cowboy” Jacob Creed & “The Rebel” Bobby Collins of The Cannon Clan. It would appear to be a handicap match before “The Gatekeeper” Kelly Klein stepped up citing Jordynne Grace was on the same delayed flight and was more than prepared to back up Kiyomiya. The team of Kaito Kiyomiya and Kelly Klein were victorious by submission.
5) In one of the wildest Tables, Ladders, and Chair Matches ever witnessed “Tornado” Tony Kozina retained the Canadian Unified Jr. Heavyweight Title against “Second To None” Alex Anthony, “The Red Ribbon Warrior” Kenji Brea, The Mercenary, & “The King Of Pong” Ethan Price.

CWE 7/31 Stonewall, MB Results.
1) Pro Wrestling NOAH’s Kaito Kiyomiya was victorious in his CWE debut in a 20 minute mat classic against “The Rabid Dog” Rob Stardom.
2) Canadian Unified Jr. Heavyweight Champion “Tornado” Tony Kozina retained his title in Four Corner Survival against “Second To None” Alex Anthony, “The King Of Pong” Ethan Price, & the debuting “Red Ribbon Warrior” Kenji Brea.
3) Ring Of Honor Star “The Last Real Man” Silas Young returned to CWE for the first time since May of 2016 teaming with Kute Kody to defeat the team of “Hotshot” Danny Duggan & “The Mercenary” when Silas pinned The Mercenary.
4) CWE Champion “Wrestling’s Strongest Man” Tyler Colton with NWA Legend “The Russian Nightmare” Nikita Kolff in his corner retained against “Killa” Kaz Karter after a powerbomb. After the match Karter attempted to assault Colton and was met with a Russian Sickle by Koloff.
5) ROH’s “The Gatekeeper” Kelly Klein tapped out Tasty Travis in an inter gender match.
6) Shane Sabre & Phil Atlas scored a win and captured the CWE Tag Team Championships for the first time but besting current champions “The Crazed Cowboy” Jacob Creed & “The Rebel” Bobby Collins.